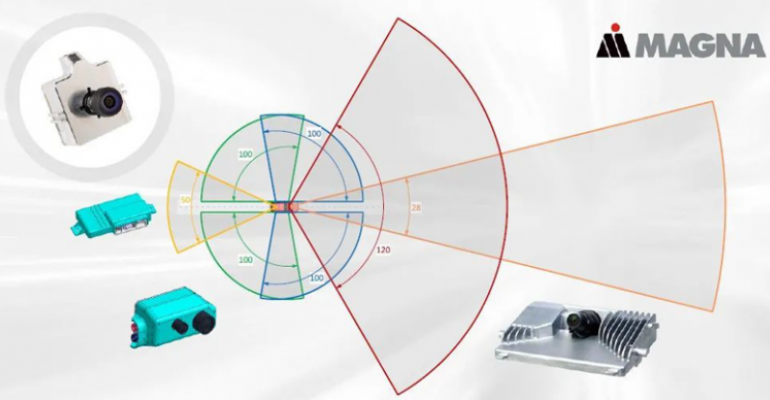 Magna says the new technology will reduce the cost of adding camera-based ADAS features, such as adaptive cruise control, automatic emergency braking and pedestrian detection, and thus make its way into more vehicles.

When self-driving cars hit the road in large numbers, there’s a good chance some of Magna’s technology will be onboard.

But despite unveiling a new “one-box” front-facing camera system last week, no one at Magna thinks those fleets of autonomous vehicles will be in service anytime soon.

“In these uncertain times, (with) automakers tapping the brakes on the rollout of fully automated vehicles, our immediate focus is on Level 1, Level 2 and 2-plus systems,” Magna Electronics President Uwe Geissinger says. “Fully autonomous driving will not be fully implemented in more than 1% of vehicles until 2030.”

That doesn’t mean the company isn’t working on ADAS components, commonly thought of as the building blocks for AVs. The latest is Magna’s new forward-facing camera (below), a fifth-generation unit that includes the related software in one unit and which is based on Mobileye’s EyeQ5 system-on-chip (SoC) device.

Magna Senior Vice President Sharath Reddy says the new camera package offers full-color capability which will allow it to detect green lights and emergency vehicles, and its 120-degree, eight-megapixel optical path makes it more reliable for the ADAS systems that require its input. The improved vision will enable features required to pass Euro NCAP 2022 and 2024 safety tests as well as Level 2-plus autonomous driving functions such as Magna’s Highway Pilot and Highway Chauffeur technologies.

As for when the world will get to drive a vehicle with this technology, Reddy says Magna is in development with a large European premium OEM, and production “will be coming up very soon.”

Future Euro NCAP test procedures also are affecting the work Magna is doing with its other products. Magna’s suite of ADAS system components and partners include Lidar (with Innoviz), radar (with Uhnder) and ultrasonic sensors (with Murata). The company also is working on driver-monitoring technologies, which help make the next level of autonomous vehicles safer. Magna’s driver-monitoring camera can be installed in a number of places, including the steering column, interior mirror or A-pillar.

“For Euro NCAP 2022 and 2024, we can achieve at least one or two points by having driver monitoring,” Reddy says. 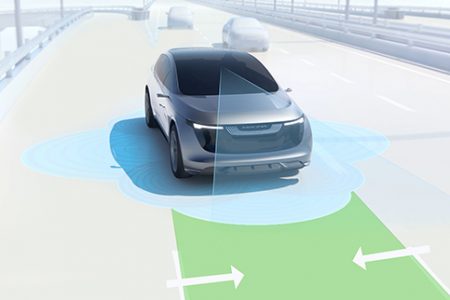 Magna’s occupant-monitoring system can be added to vehicles at low cost when used with Magna’s ADAS domain controller, Reddy says. The controller is scalable to operate in Level 0 to Level 3 AVs and support up to Euro NCAP 2025 regulations.

Magna says it has designed some of its ADAS building blocks to be put together in ways that are cost-effective and capable of more than they can do on their own.

MobilEye’s EyeQ5 chip, for example, can work with Magna’s 3D Surround View technology as well as allow higher levels of AVs. Reddy reiterates that this isn’t the next step, though.

“We’re not focused at this point on Level 4,” he says. “We're mostly looking at Level 2-plus and Level 3 systems at this point.”