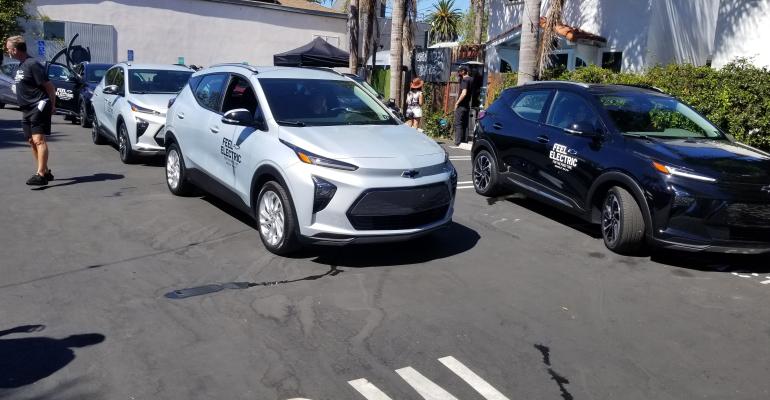 LOS ANGELES – Erik Roberts and his stepdad Bob are checking out a battery-electric Chevrolet Bolt outside a trendy restaurant in Venice, CA, a Los Angeles neighborhood. They already are electric-vehicle enthusiasts: Erik is on his second Bolt and Bob says he has a Kia Niro BEV because a Bolt wasn’t available.

“The Bolt family will be No.2 behind Tesla for EV sales in 2023,” Erik Roberts (pictured below, on right, with stepfather Bob) boldly predicts.

That prediction, if it turns out to be true, would be music to General Motors’ ears. Tesla may have grabbed a big chunk of the BEV market, but traditional automakers aren’t taking its lead lying down. They are launching battery-electric vehicles in segments Tesla isn’t targeting and throwing marketing dollars into BEV launches, aiming to convince consumers a BEV fits their lifestyle. 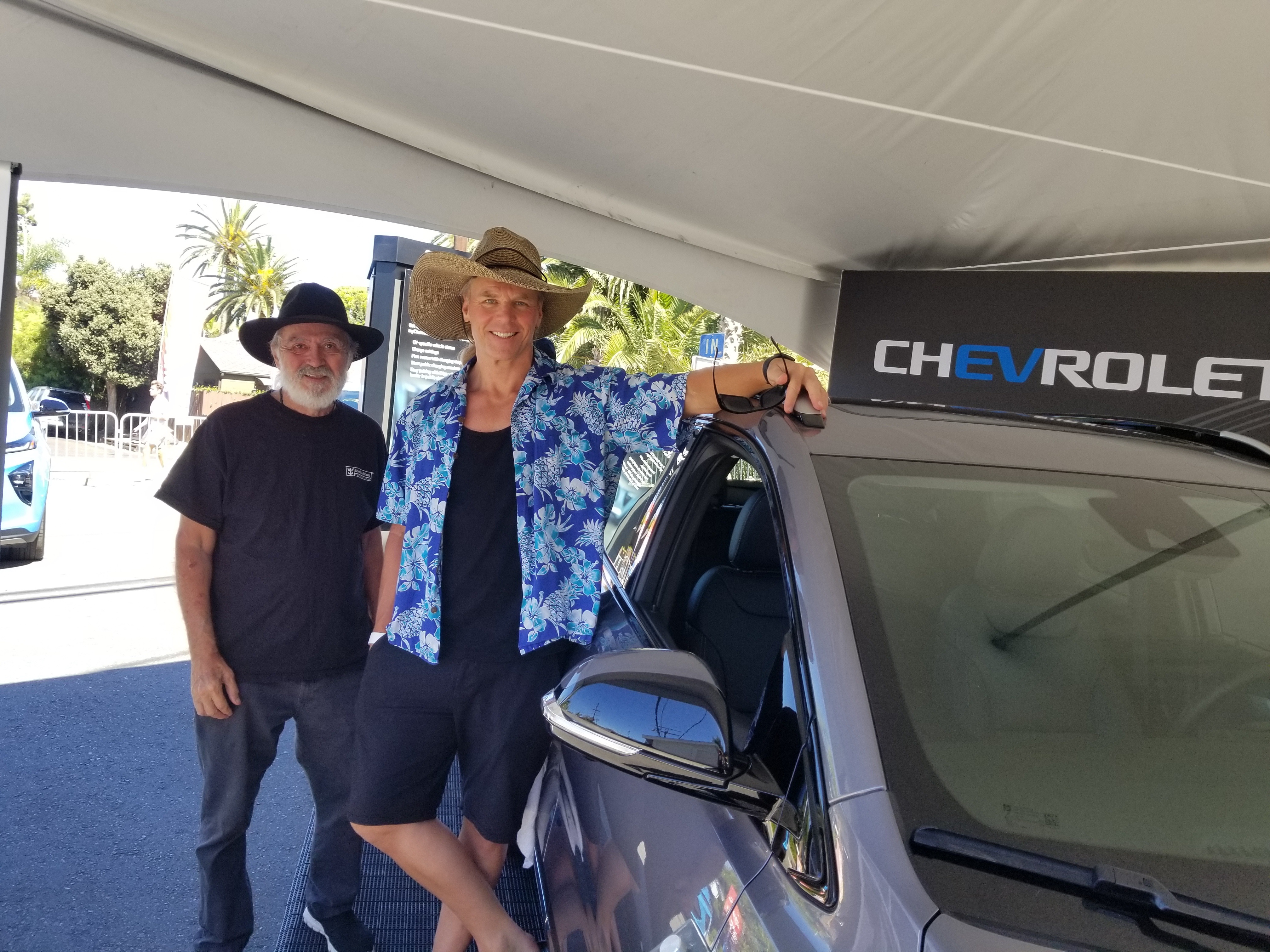 GM is investing more in marketing the Chevrolet Bolt than any model except the Silverado pickup, says Shad Balch, director of Chevrolet communications. Launched in 2017, GM sold more than 103,000 units of the compact BEV through the end of 2021, including sales of the Bolt EUV, which was only available for part of 2021.

A ride-and-drive event – held on Venice’s Electric Avenue (pictured, below) – was open to walk-ups and those who pre-registered online. GM publicized it for several weeks with billboards and through social media, says Balch. As of the morning of the event, more than 400 had pre-registered, though the final participant count was around 150. It was a one-off event, held here because California is the hottest BEV market in the U.S. Some 550,000 BEVs were sold in the U.S. in 2021. California accounted for more than 40% of those sales. 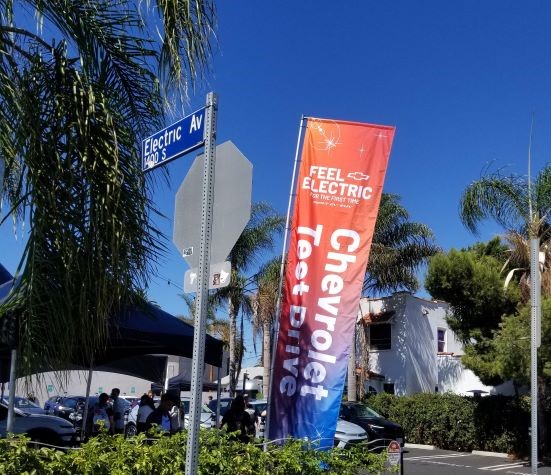 Automakers are pouring money into producing and marketing electric vehicles, betting that the technology will catch on. Their marketing strategies vary. With the Bolt, GM is targeting first-time vehicle buyers, says Balch. The Venice event offered the Bolt EV and the Bolt EUV (Electric Utility Vehicle) for test drives.

“Currently, the Chevy Bolt is the best bang for your dollar and the most affordable EV,” says Janice Yoell, senior manager-Business Intelligence, Kelley Blue Book.

The Bolt still qualifies for California’s zero-emission-vehicle tax incentives of up to $7,000 as long as the program has funding. Next year, it may also qualify for federal incentives under the Inflation Reduction Act, full details of which have not been published. “The value proposition is very compelling,” says Balch.

Ford has a different strategy. For its BEV launches, Ford has targeted “key volume segments where we can make a difference to EV adoption,” says Martin Gunsberg, customer experience communications director for Model e, the automaker’s dedicated electric-vehicle division. It launched the Mustang Mach-E in late 2019 and the F-150 Lightning pickup in mid-2021. “Our strategy has been to electrify our most well-known nameplates,” says Gunsberg. Ford currently is the No.2 seller of electric vehicles in the U.S. behind Tesla.

Ford won’t discuss the marketing budget for its electrified vehicles. But experiential events are a key part of Ford’s marketing plan, from its Ocean-to-Ocean Mustang Mach-E campaign to standalone events for the Lightning, says Gunsberg. “One of the key proof points of these experiences was to provide opportunities for customers to get rides in our latest electric vehicles.”

GM also is using fleet sales to get consumers behind the wheel of its BEVs. GM and Hertz announced Sept. 20 the rental giant would order up to 175,000 BEVs from GM, including Chevrolet, Buick and Cadillac passenger vehicles, and BrightDrop delivery vans.

Fleet sales are a key marketing tool for electric vehicles, says Eric Lyman, vice president-ALG with J.D. Power. “Putting vehicles in a rental fleet could be a wonderful opportunity to educate people about EVs,” he says.

The Bolt faced a potentially fatal problem with battery fires starting in 2020 that eventually led to GM recalling more then 140,000 Bolts for full battery or defective cell replacements. Chevrolet dealers had to stop selling Bolts in the summer of 2021. Sales resumed in April.

The stop-sell action likely boosted the model’s resale value. It has seen little depreciation since the supply of used Bolts is so limited, says KBB’s Yoell. “The few units that do come up for sale often command a premium and are listed close to their original MSRP,” she says.

For Erik Roberts, the Bolt recall has been a bonanza. He negotiated a deal with GM under which it pays for him to rent and drive other EVs while he awaits repairs on his 2020 Bolt. He remains a Bolt fan. “If you count the beans, the Bolt is a much better value,” says Roberts.