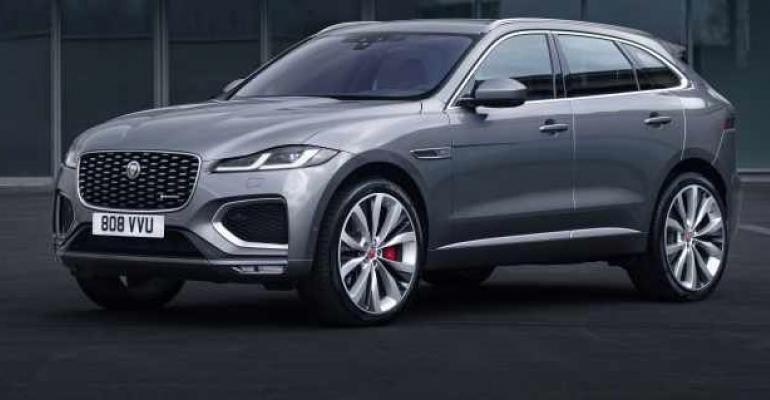 Jaguar hopes you like what the designers have done here, as the F-Pace's new design is setting up a blueprint for future models.

When Jaguar started updating the new F-Pace, it didn't want to make the average new model year changes. Instead, with a completely new interior and a few exterior upgrades, the 2021 Jaguar F-Pace is far more than a midcycle refresh, says Jaguar design director Julian Thomson.

"It's been great for our team to have the opportunity to revisit these cars and go back and refine them and make them better," he says, speaking about both the new F-Pace and the upcoming 2021 XF, which will be unveiled later this month. “We’ve gone over the car with a fine-tooth comb and made every single thing better.”

Thomson says the ’21 F-Pace has a focus on technology, but is also an authentic, luxury Jaguar vehicle. It also will be Jaguar’s first plug-in hybrid, but only in Europe.

In the U.S., the ’21 Jaguar F-Pace will come in four trim configurations with three powertrain options, all using an 8-speed automatic transmission. The 250 and S 250 versions each use a 2.0L turbocharged gasoline 4-cyl. that produces 246 hp. 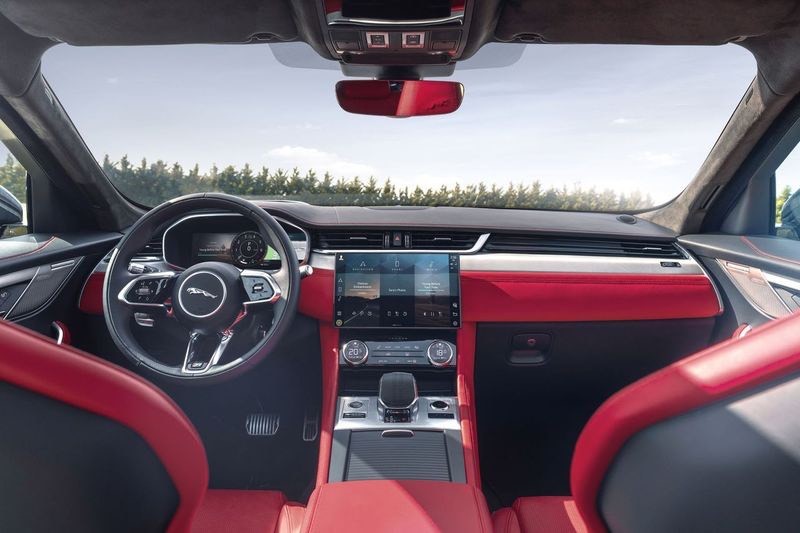 The mild hybrids store regenerative braking energy in a 48V lithium-ion battery pack and can use it for acceleration, with the R-Dynamic S 400 hitting 60 mph (97 km/h) from zero in exactly 5 seconds, Jaguar says.

It’s the updated looks, though, where Jaguar designers spent lots of time making sure the ’21 F-Pace got what it deserved, with particular focus on the lighting.

Up front, the “Double J Blade” daytime running lights and slim, LED quad headlights accentuate an enlarged grille with a can't-miss-it logo in red. The rear lights (pictured below) use Jaguar's double chicane graphic previously seen on the all-electric I-Pace.

Aside from the lights, the new F-Pace's hood and sides have been updated, and the R-Dynamic version stands even further apart with enhanced performance looks.

Inside, Jaguar has put a premium on keeping things calm and clean. Ambient lighting is almost a given in upscale cars these days, and the F-Pace includes both configurable subdued lights as well as warm white courtesy lighting in "key areas."

Drivers will gain information from the 12.3-in. (31-cm) interactive driver display behind the steering wheel (pictured below).

Jaguar also has two ways to keep the outside, well, outside thanks to active road noise cancellation and an optional PM 2.5 filter to keep what the EPA calls "fine inhalable particles" (particulate matter that's less than 2.5 micrometers in diameter) out of your lungs.

Jaguar hopes you like what the designers have done here, as the F-Pace's new design is setting up a blueprint for future models.

Jaguar also provides a Pivi Pro infotainment system and 14-speaker Meridian sound system to keep you entertained. Like other automakers – see the Polestar 2, with its Android Automotive OS – Jaguar is trying to not just integrate smartphones with the car (and the F-Pace can connect to two phones at once), but also to make the car’s built-in system feel more like your phone. 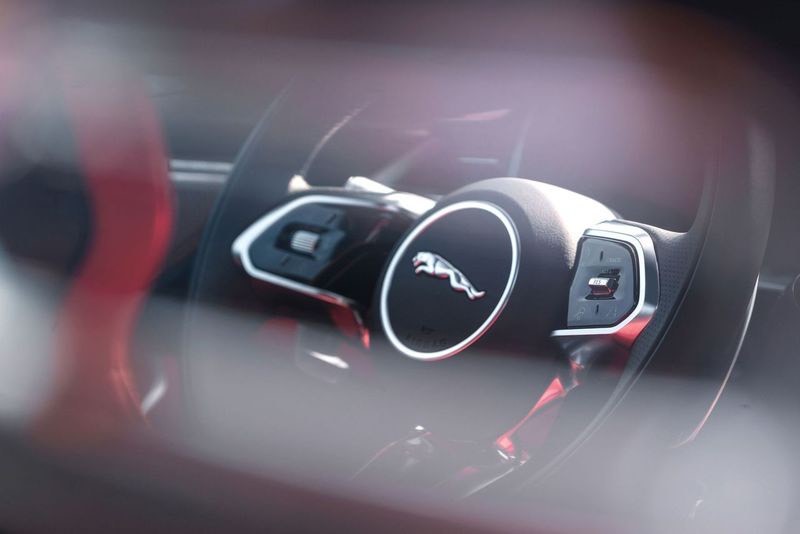 Jaguar says Pivi Pro’s flat menu structure is intuitive, putting favorite features either on the 11.4-in. (29-cm) curved-glass home screen or just one click away, with “most other features” accessible by two clicks.

Jaguar’s Electronic Vehicle Architecture, now in its second generation, allows for over-the-air updates and even powers the dual-sim Pivi Pro with a dedicated energy source so that it turns on when you open the door and before you sit down in the driver's seat.

The ’21 F-Pace has plenty of driver-assistance and safety technologies, with blindspot and rear traffic monitors as standard features. An optional Clear Exit Monitor watches for cars or cyclists approaching from the rear and will warn occupants when they start to open the door.

An updated smart wearable device called the Activity Key can be used to access the new F-Pace even without the key fob.

Details on price and on-sale date will be announced later.