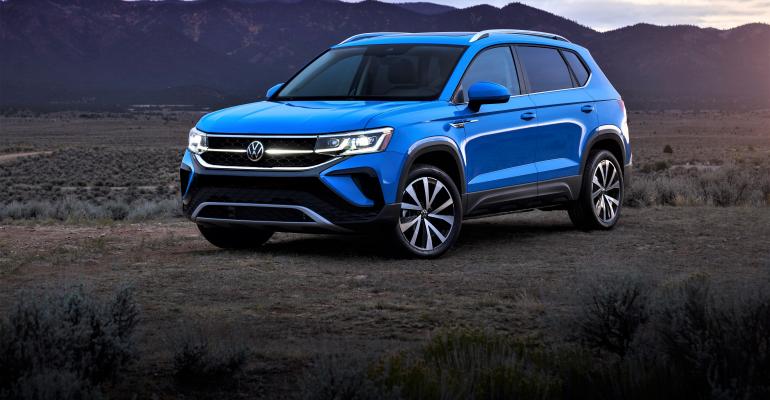 Similar to its approach with the Atlas, Volkswagen pairs the entry-level ’22 Taos with the existing Tiguan to reach the broadest cross-section of compact CUV shoppers.

When the new ’22 Volkswagen Taos goes on sale in the second quarter of 2021, it will join the existing Tiguan in the compact CUV class.

It won’t be the first time Volkswagen has doubled up to reach different customers within a market segment. The automaker takes the same approach with the 5-passenger Atlas Cross Sport and 7-passenger Atlas.

With the ’22 Taos, however, VW employs a different tactic. Rather than sell two versions of the Tiguan, the automaker bases the new Taos on a vehicle originally designed for Chinese and South American customers, modifying it for North American consumer preferences.

VW says this strategy enables the Taos to better compete in price while simultaneously offering the expressive design and modern technology buyers seek in a small, entry-level CUV.

Volkswagen anticipates finding plenty of customers for the Taos. The automaker’s research shows compact CUVs account for nearly a quarter of all new-vehicle sales in the U.S. Furthermore, a third of its U.S. customers already buy the Tiguan, which occupies territory at the larger and more expensive end of the class. The new Taos is a smaller and more affordable alternative, allowing the automaker to double its presence in a market segment it believes will account for 28.1% of all sales by 2030. 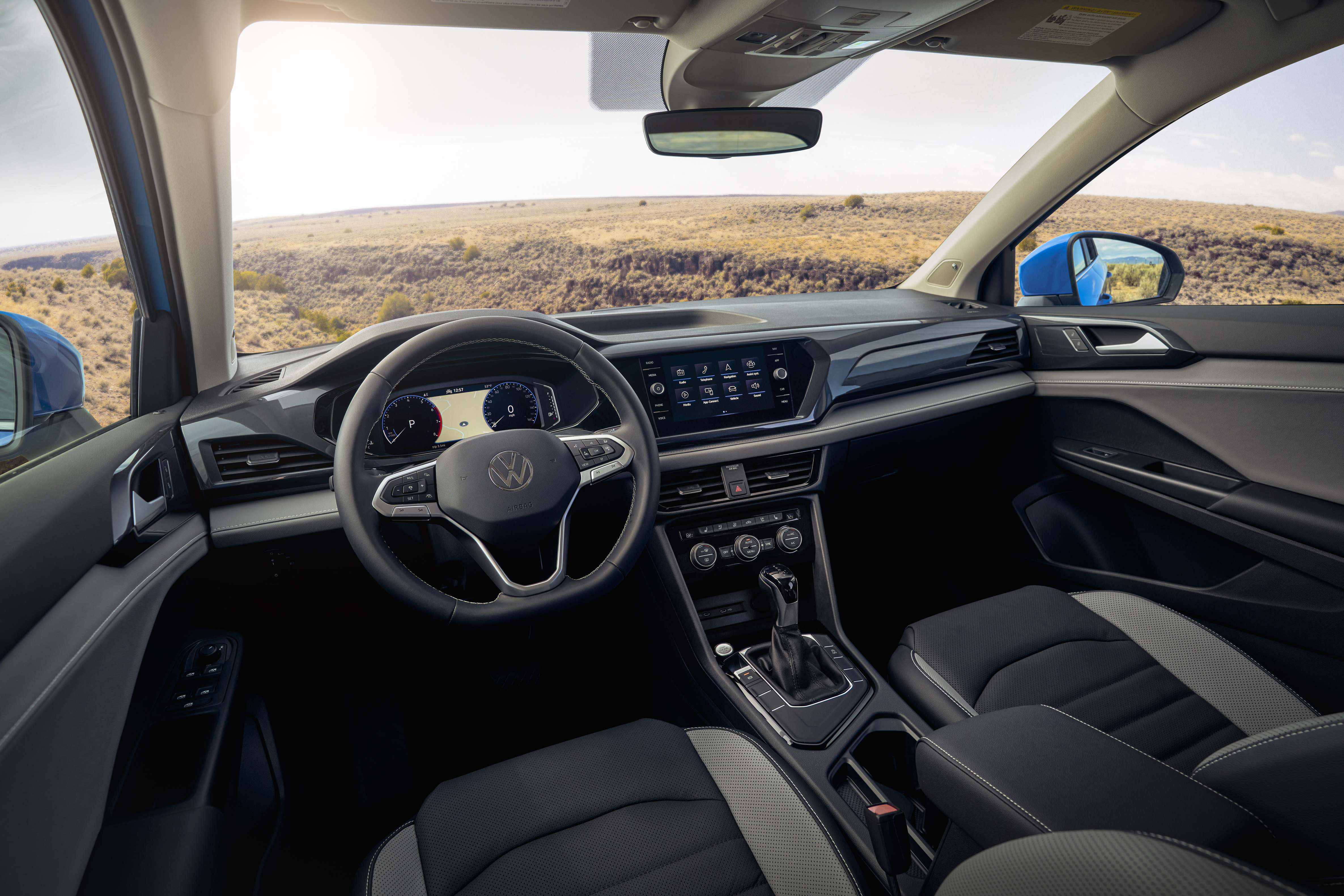 Recently, VW invited us to drive a pre-production prototype of the new ’22 Taos. Our report includes details of the CUV’s sophisticated new 1.5L turbocharged 4-cyl., available transmissions and our initial driving impressions. Now, the automaker has released further information about the Taos.

A standard two-tone color scheme dominates the interior (above), which has a clean, high-tech appearance. Digital Cockpit instrumentation is standard, using a configurable 8-in. (20-cm) display. In higher trims, an upgraded version of Digital Cockpit offers a 10.25-in. (26-cm) screen.

A 6.5-in. (16-cm) infotainment touchscreen is standard, and the ’22 Taos includes next-generation Car-Net connected services with subscription-based Wi-Fi.

IQ Drive also equips the Taos with Travel Assist for Level 2 ADAS on highways and Emergency Assist, which brings the Taos to a safe stop if the driver becomes unresponsive.

Volkswagen will offer the ’22 Taos in S, SE and SEL trim levels. Cloth seats are standard, and every Taos has push-button engine starting, LED headlights with automatic operation and LED taillights. A Cold Weather Package for the Taos S installs heated front seats, heated side mirrors and heated washer-jet nozzles.

The automaker will finalize Taos prices closer to the CUV’s expected arrival during second-quarter 2021. Competitive targets include the Jeep Compass, Nissan Rogue Sport and Subaru Crosstrek, with base prices ranging from $22,245 to $23,895. 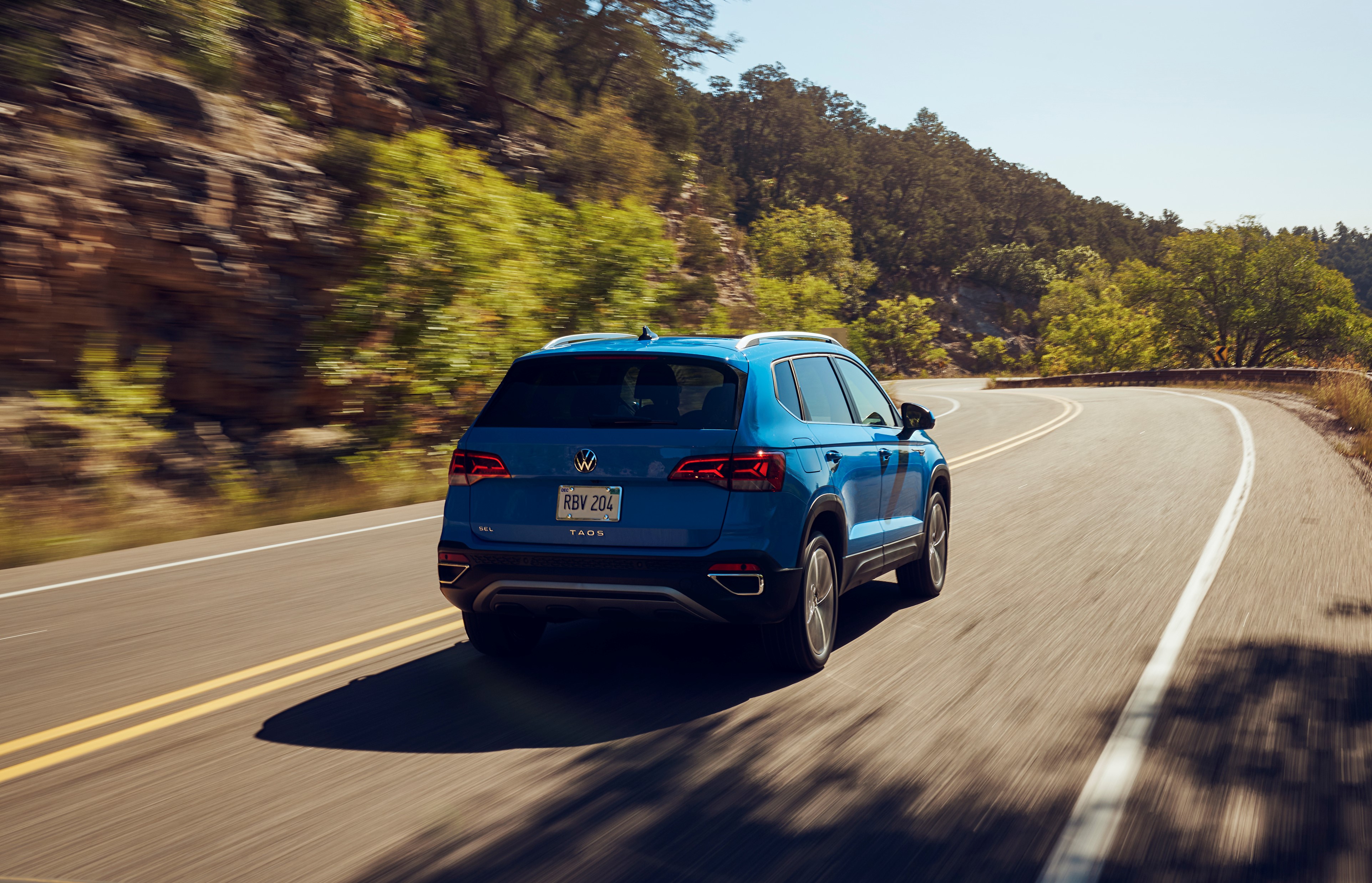