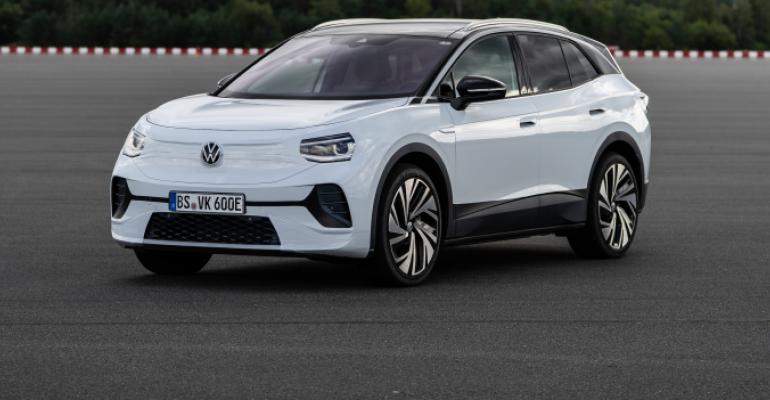 Volkswagen
VW's all-electric ID.4 is planned to be produced in Chattanooga in 2022, but initial models will come from Germany this fall.
Vehicles>Test Drives

With 228 lb.-ft. (309 Nm) from the very moment you nudge the throttle, this all-electric two-row CUV is loaded with torque. Arriving in the U.S. this fall, the ID.4 delivers excellent body control and maneuverability and a roomy and upscale interior.

EHRA-LESSIEN, Germany -- “Never before has an electric vehicle been conceived with such a global outlook.”

Ralf Brandstätter, the newly elected Volkswagen CEO, is talking up the new ID.4 ahead of our first drive of the new electric-powered CUV.

The second model from Volkswagen’s electric-only ID. sub-brand is positioned in the fastest-growing market segment in the world, and in line with the mass market aspirations for the two-row crossover, it is set to be built in no fewer than five factories on three continents, including VW’s Chattanooga facility in Tennessee.

Before North American production gets underway in 2022, though, the ID.4 will begin rolling down the line at Volkswagen’s refitted Zwickau plant in Germany, from which initial U.S. market models will be sourced for a planned start to deliveries here later this year.

Like the smaller ID.3, it is based on Volkswagen’s MEB electric-car platform. The U.S. lineup is yet to be revealed, though Volkswagen says early production will be focused on four rear-wheel-drive models with rear-mounted electric motors rated at 146 hp, 168 hp 173 hp or 201 hp.

The former two come with a 52-kWh battery, while the latter two run a 77k-Wh battery.

Also set for introduction in 2021 are a pair of all-wheel-drive ID.4 performance  models, both using the larger 77-kWh battery in combination with two electric motors – a smaller unit mounted up front and a main unit at the rear – developing a combined 262 hp or, in an unconfirmed GTX-badged range topper, a headlining 302 hp.

Volkswagen says models with the 77-kWh battery boast a range of up to 323 miles (520 km) on the WLTP test cycle.

Visually, the ID.4 holds true to the form established by the early ID. Crozz concept. With a drag coefficient of 0.26, it also is among the most aerodynamic CUVs yet.

It is longer, wider and lower than the recently facelifted second-generation Tiguan. But the ID.4 sits on a 109-in. (2,766-mm) wheelbase, which is 3.3 ins. (85 mm) longer than that of its combustion-engine CUV stablemate. It also rolls on standard 18-in. wheels with optional rims up to 21 ins.

The driver’s door opens wide, and you step up into the ID.4 over a rather high sill. 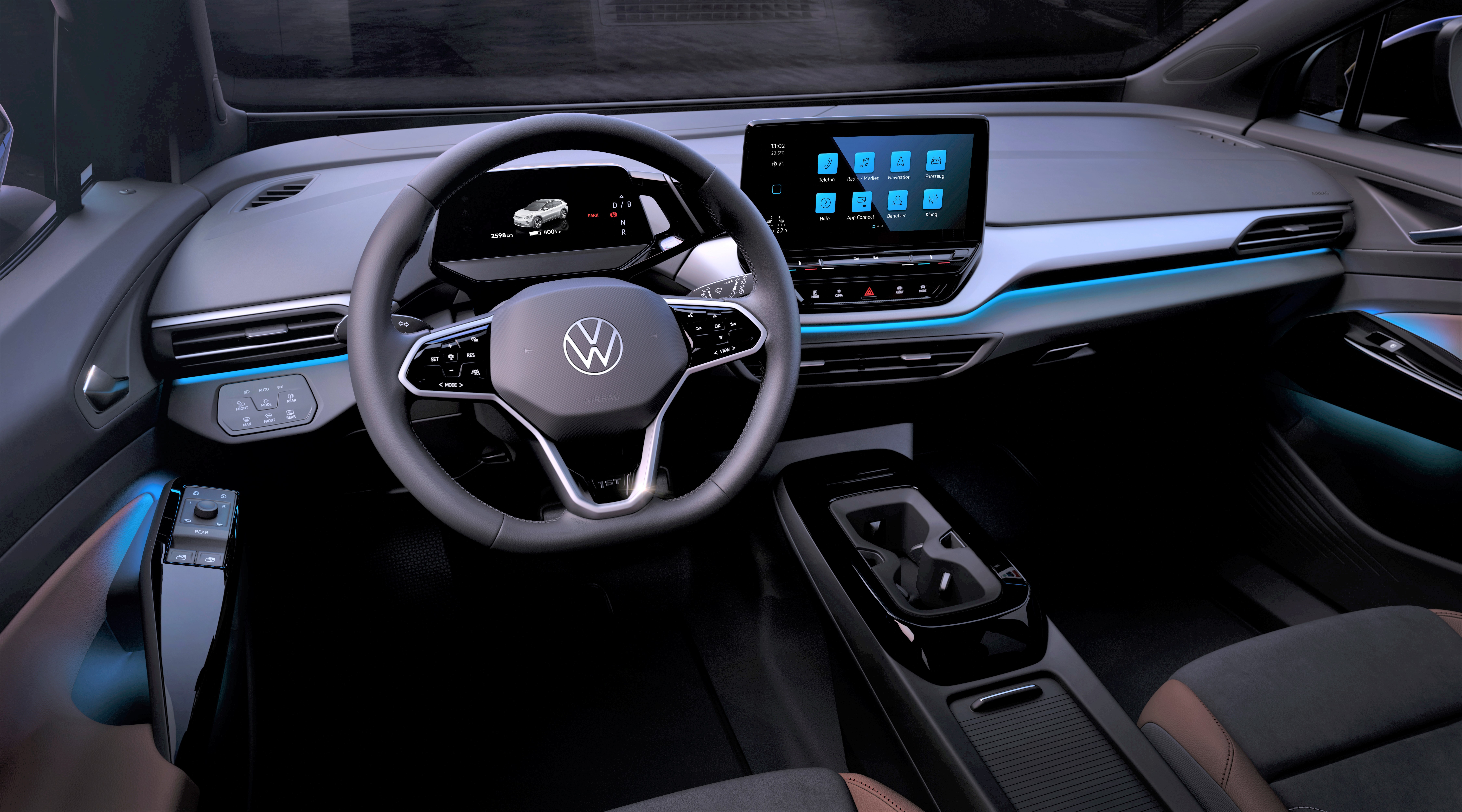 The front seats are elevated but not excessively so, while the multi-layer instrument panel houses two displays: a 5.3-in. (13-cm) digital instrument panel and a 10-in. (25-cm) centrally mounted infotainment screen as standard (pictured above), though the well-equipped prototype receives an optional 12.0-in. (30-cm) display in combination with an optional augmented-reality head-up display.

Volkswagen describes the cabin as an “open space architecture.” It is pleasingly roomy, with more rear seat legroom than you’ll find in a standard-wheelbase Tiguan. The trunk, with a fairly high loading lip, also is generously proportioned.

Hit the starter button hidden on the steering column trim, then twist the gear selector to get moving. One notch forward gets you the standard drive mode while two notches selects battery mode, at which the brake energy regeneration is triggered for added energy harvesting.

We’re in the most powerful of the rear-wheel-drive ID.4 models. With 228 lb.-ft. (309 Nm) of torque on tap from the very moment you nudge the throttle, it is brilliantly responsive. It’s probably more spirited than it needs to be up to typical highway speeds, at which it is both quiet and relaxed.

Volkswagen is yet to reveal any official performance figures, though it does say the top speed of initial rear-wheel-drive ID.4 models will be limited to 100 mph (160 km/h).

In standard drive mode, it coasts with a very faint hint of brake regeneration when you lift off the throttle. Call up battery mode and it delivers quite strong regenerative properties; there’s little need to operate the brake pedal yourself except when coming to a complete stop.

Beyond the acoustic pedestrian warning, which switches off above 12 mph (19 km/h), the ID.4’s powertrain operates in virtual silence. But because it is otherwise so quiet and refined, you’re also aware of quite a lot of wind buffeting around the large door-mounted mirrors (pictured below).

Dynamically, there’s a lot to like here. The steering is nicely weighted and well geared, providing a direct but not overly urgent action fully befitting the ID.4’s mass-market ambitions.

With the electric motor confined to the rear, the front wheels have lots of room to turn. The resulting 33-ft. (10.2-m) turning circle endows the new Volkswagen with outstanding maneuverability. 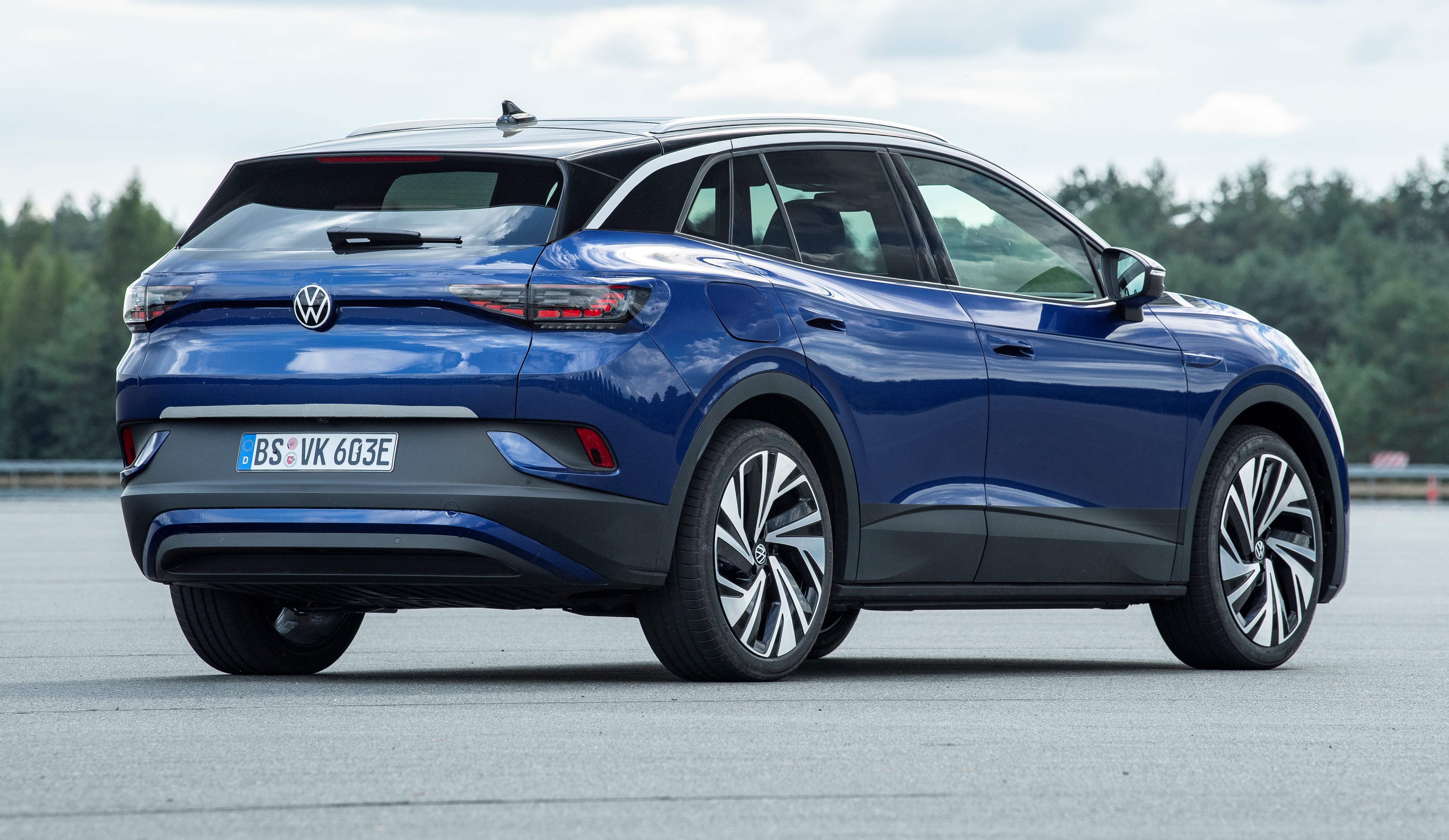 Relative to a CUV with a combustion engine, the ID.4 feels well planted, thanks to floor-mounted batteries contributing to a lower center of gravity. The chassis, featuring MacPherson struts up front and a multi-link arrangement at the rear, is similar in design to that of the ID.3 and comes with adaptive damping as either standard or optional depending on the model.

There’s a measured RWD fluency to the handling, which is characterized by excellent body control, strong grip and good traction in sport mode. Despite the low-profile tires worn by the prototype we drove, the ride is acceptable when switched into comfort, with good bump absorption and controlled rebound qualities despite its inherent tautness.

The ID.4 is a car you adapt to quickly. There’s true driver engagement in the responsiveness of its electric powertrain and handling agility, whether in an urban environment or out on the open road.

If Volkswagen prices it right – a starting point of €37,000 ($44,000) in Germany suggesting it already has – the ID.4 promises to leave quite a mark, not only on its EV rivals but also the compact CUV class as a whole.