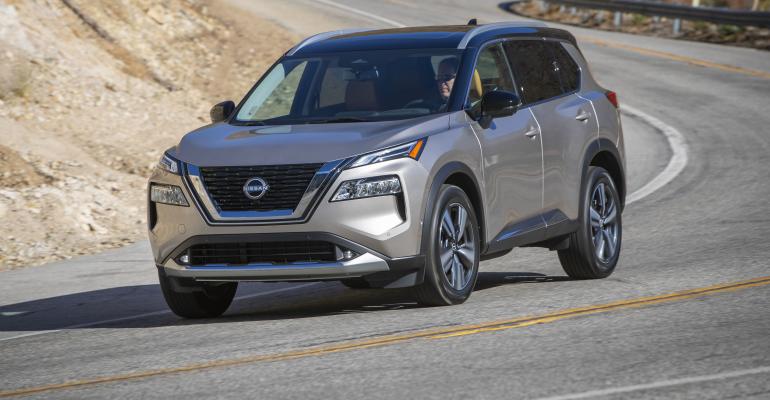 All the big changes are under the hood in the ’22 Nissan Rogue.
Vehicles>Test Drives

We drive the ’22 Nissan Rogue featuring a variable-compression 1.5L 3-cyl. turbo, the latest application of the Japanese automaker’s award-winning technology that shifts the engine between high and low compression depending on demand.

FARMINGTON HILLS, MI – A couple of clicks on the steering-wheel buttons brings up the variable-compression indicator on the instrument panel in the ’22 Nissan Rogue, serving as a real-world coach to help us keep the engine in its most-efficient high-compression range.

That 14.0:1 compression ratio is the economy zone for the latest version of Nissan’s VC-Turbo technology, now applied to an all-new 1.5L 3-cyl. following the innovative system’s introduction in the 2.0L VC-Turbo 4-cyl. in the ’19 Infiniti QX50, followed by the ’19 Nissan Altima.

Similar to the 2.0L VC-Turbo we recognized with Wards 10 Best Engines & Propulsion Systems awards in 2019 and 2020, the 1.5L VC-Turbo uses a unique multilink crankshaft and connecting rod device that alters the length of the piston stroke 1.2 mm, giving the engine the benefit of high-compression 14.0:1 turbo efficiency combined with the power provided by the lower 8.0:1 compression mode. 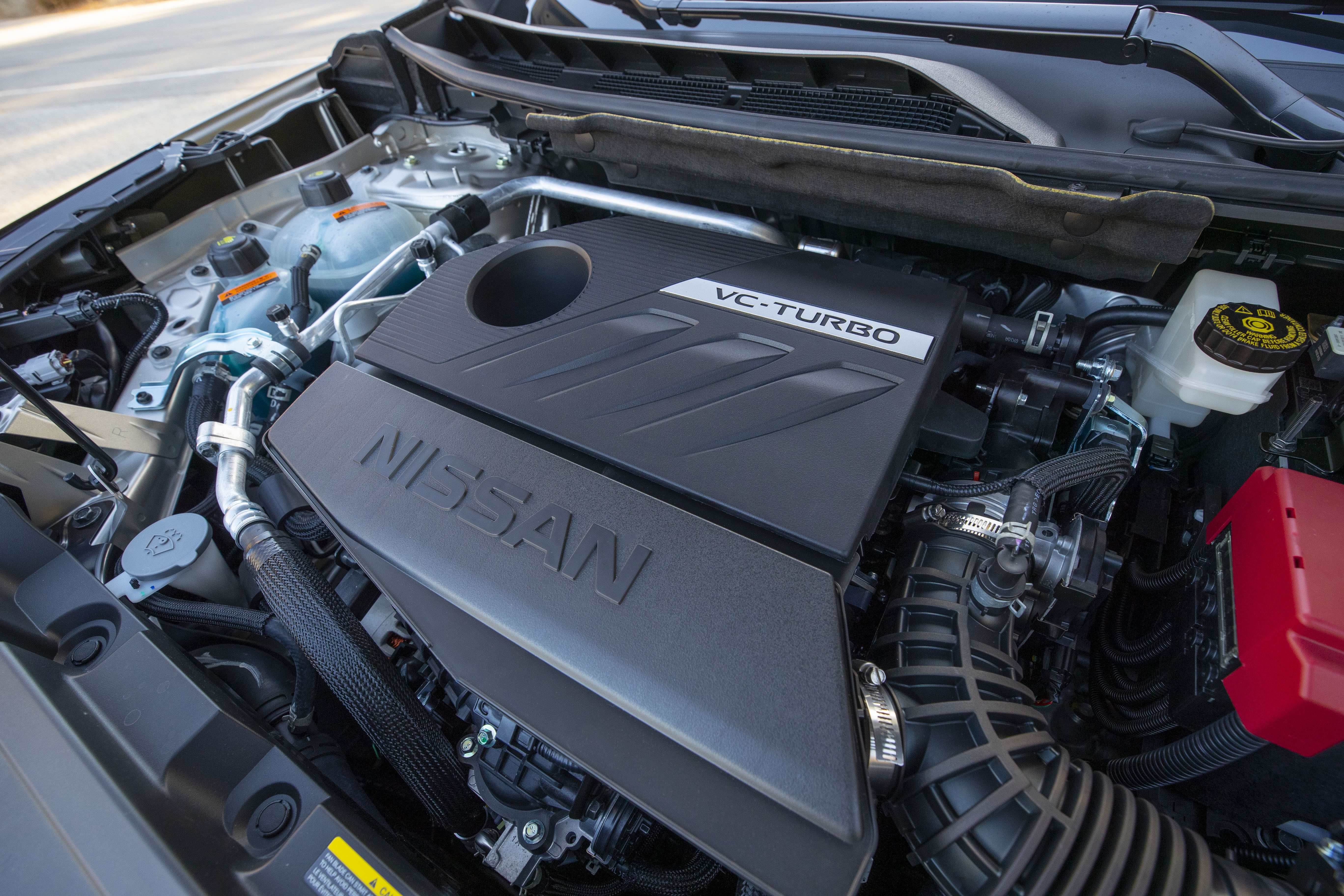 The 1.5L VC-Turbo is backed by a third-generation Jatco-built CVT that simulates an 8-speed automatic. The new transmission incorporates two oil pumps, one with low flow for smooth, slow shifting while the second high-flow pump intervenes to provide quick shifts in more aggressive driving.

On a short drive route here near Nissan’s technical center in southeast Michigan, the small VC-Turbo is surprisingly responsive, with an aggressive reaction at throttle tip-in followed by good power as peak torque kicks in at 2,800 rpm and the engine quickly revs to its 6,000-rpm redline.

Try as we might, it’s hard to detect a change in engine character when the VC-Turbo gauge indicates the compression ratio is shifting from high to low and back again. More noticeable is when the turbo pressure leaps to 15 psi on the adjacent gauge, combined with the lower compression ratio.

This latest VC-Turbo won’t overwhelm with its power, but there’s still plenty of punch, especially when dialed into Sport mode, which seems to allow the transmission to hold ratios longer and provide more distinct simulated “shifts” from ratio to ratio. If given a choice, we’d make “Sport” the default setting and allow the driver to opt for the more efficient Eco mode.

We detect a bit of engine rattle when mashing the accelerator at low rpm, but otherwise the engine’s torque-rod mounts and the vehicle’s active noise cancellation combine with the engine’s performance-pitched tone and distinct induction sound to offset any unusual underhood clatter. 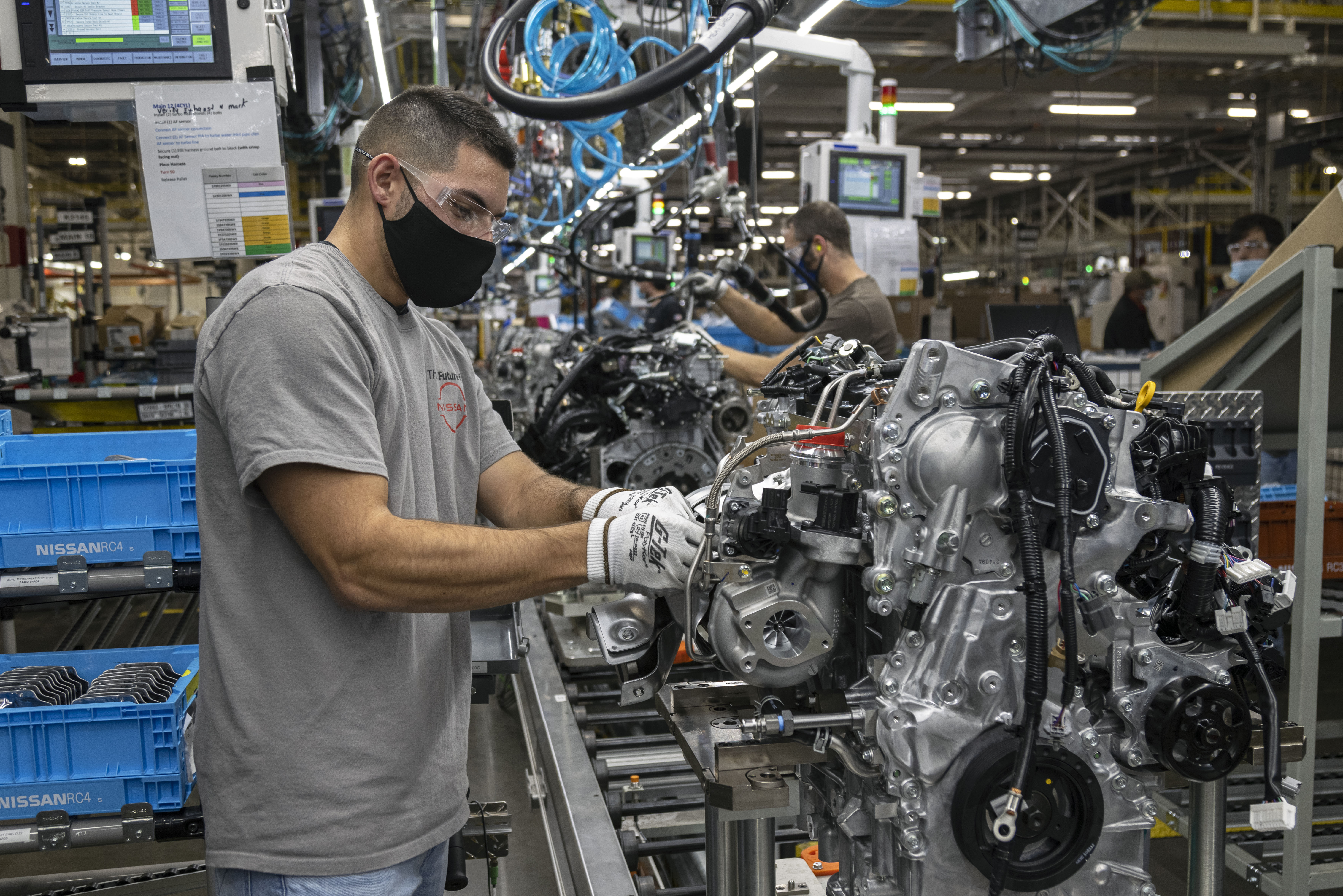 Nissan says the 1.5L VC-T will be the standard – and only – engine across the ’22 Rogue lineup, introducing a major powertrain upgrade in a vehicle that was otherwise completely overhauled for the 2021 model year.

That likely will mean a huge bump in volume for automaker’s variable-compression technology, given that the Rogue is Nissan’s sales leader with 249,531 deliveries through October, up from 183,060 year ago. Other models equipped with VC-Turbo engines, the Altima and Infiniti QX50, totaled just under 100,000 units for the same 10-month period.

Nissan says its 3-cyl. provides more torque than the 4-cyl. competition in the segment sales-leading Honda CR-V and Toyota RAV4 and outdoes all competitors in combined fuel economy.

The engine is built on a new assembly line (pictured above) at Nissan’s plant in Decherd, TN, and shipped to Smyrna, TN, for vehicle assembly. 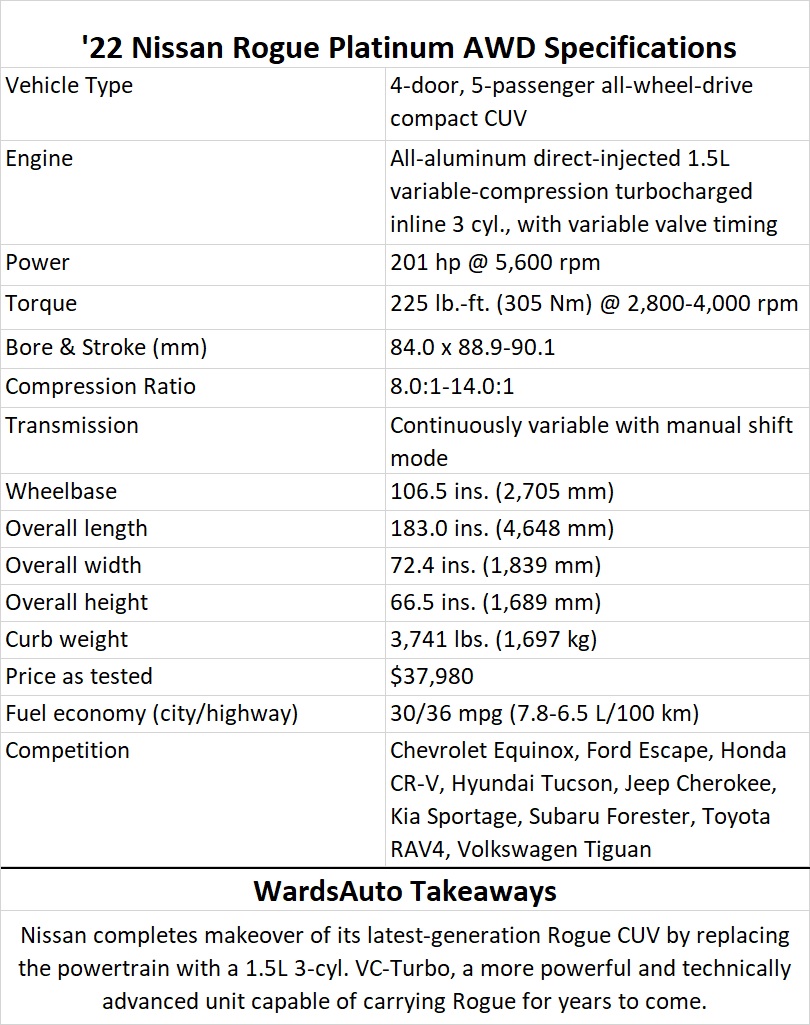