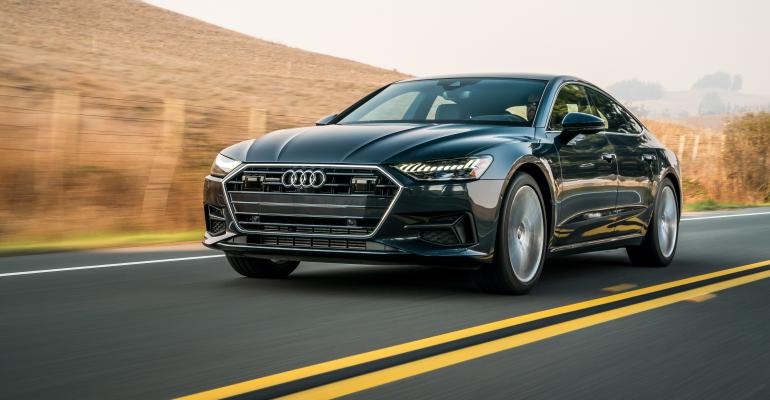 Backed by a 3.0L turbo V-6, both cars drive well, but the real story with these all-new models can be found in their design detail and a risky switch to a touchscreen-based infotainment system.

It’s no longer solely about high performance and pampered comfort, Audi officials say. It’s about “what does the product do for you.” They describe the brand’s new “future premium” philosophy as a technology- and -design-centric path that will spawn vehicles that help, as well as delight, the driver.

To that end, the ʼ19 A6/A7 pair are packed with technology, some of it groundbreaking. The long list of available driver-assistance systems includes adaptive cruise control, lane tracking (up to 95 mph [153 km/h]), emergency braking (including rear, pedestrian and cyclist detection), surround-view camera and traffic-sign detection. The cars also come with vehicle-exit assist technology that via a flashing light and increased resistance makes it less likely you’ll open a door in the way of oncoming traffic.

All these systems function through a cutting-edge central domain controller Audi refers to as zFAS, that fuses information from up to 24 cameras and sensors (including mid- and long-range radar and a laser scanner) to help determine the ADAS driving strategies. The zFAS unit features a NVIDIA K1 image processor and technology from MobilEye, Infineon and Altera.

But the real centerpiece for the pair is the new MMI system that does away with Audi’s somewhat iconic and widely copied rotary dial controller in favor of what may be the most advanced touchscreen we’ve seen yet.

The A6/A7 MMI is really two generously sized screens, a lower one that replaces physical buttons and allows the driver to control things such as the climate system and an upper screen that functions as the primary infotainment system. Drivers can shuffle around the app icons to customize their home screen and control which functions they want to have quick access to via saved virtual buttons on the lower panel.

Despite its advanced functionality, dumping the dial represents a risk for the brand. No matter how well executed, accessing a touchscreen while driving presents some challenges that having a console-mounted dial can solve, and some Audi buyers may miss having one.

That said, Audi does everything possible to minimize dial remorse. Not only are the new touchscreen’s color-coded icons big, blocky and easy to zero in on when the car is in motion and eyes locked on the road, there’s haptic feedback and an audible “click” that tells the driver they’ve hit the mark.

The MMI also is intuitive, purposely designed to work like your smartphone, with swipes, drags, pinches and a logical organization that makes functions easy to find. There’s also improved handwriting recognition that allows for commands or queries to be written onscreen using a finger. Scribble “coffee” and the system will look for coffee shops along the route.

Avoiding the touchscreen entirely is possible with the A6/A7 voice activation system, which during our test drives here handled plain-spoken commands – no need to follow a five-step menu – for changing radio stations and climate-control settings without any hiccups. Tell the car “I’m cold” and it will ask what temperature you would like to set.

To show you how much the luxury market is changing, Audi officials on hand here spend little time discussing the A6/A7’s powertrain. Although additional engines will be offered down the line – including a new 2.0L 4-cyl. in 2019, the two cars debut with an all-new 3.0L V-6.

The all-aluminum, 24-valve 6-cyl. features a twin-scroll turbocharger mounted in the V of the engine, replacing the supercharger in the previous-generation 3.0L. A centrally mounted fuel injector and combustion method with shorter compression and longer expansion phases increases the compression ratio to 11.2:1, improving efficiency and torque.

Mated to a 7-speed S-tronic DCT with paddle shifters, the new engine responds quickly to throttle inputs through the curves and up-and-downs. It’s also a smooth operator that sounds the right note without becoming tiring.

There’s not much difference in driving dynamics between the A6 and A7, and auto writers here to review the cars appeared split on which is better. Both come with standard quattro all-wheel drive and a 5-link suspension, with optional adjustable and sport suspensions available.

I preferred the A7, which seemed to be a little better planted, with perhaps slightly less body roll, while there were others who felt the A6 was a tad more responsive and predictable.

But the real differentiation is in the exterior design, and probably should be the real deciding factor when it comes to which car to purchase. That, too, is in the eye of the beholder. But it’s clear that even though the A6 outsells its sibling three to one, inside the ranks of the Audi design studio, it is the sleek A7 fastback that is considered the more iconic of the two cars.

For the new A7, Audi trimmed the tail, slightly raising the teardrop edge (ins. [33 mm]) and eliminating the small bump in the back for a more fluid line. The back of the A7 tapers into the adaptive spoiler that extends at speeds above 75 mph (121 km/h). The shoulder line has been lowered and the beltline made less severe. The crease that runs from the rear end forward along the side has been lowered to better catch the light and create a more solid stance, says the car’s designer Sebastian Russo.

Much attention has been paid to the front and rear lighting, which is becoming a key brand and model character feature for Audi and is a signature differentiator between the A6 and A7. Three headlight systems are available: standard LED, HD Matrix-designed LED (standard on Premium Plus) and HD Matrix-design LED with laser light (standard on Prestige). At the rear are LEDs.

On the A7, there’s a continuous LED light strip at the rear made up of 13 vertical segments and spanning the length from taillight to taillight. On the A6, chrome trim replaces the light bar. Audi also has programmed the two cars differently so that the lighting produces unique wake-up and shutdown sequences when the doors are unlocked and locked.

Inside the cars are more similar, with a nicely detailed cockpit that wraps around the driver more so than that of the bigger A8 sedan, which is spun from the same architecture. The instrument panel consists of Audi’s groundbreaking Virtual Cockpit digital display first seen on the ’15 TT coupe. Contrast stitching, carbon-fiber and aluminum trim, ambient lighting in 30 possible colors, massaging 18-way seats and optional 16- and 19-speaker Bang & Olufsen sound systems rated at 705 or 1,820 watts, respectively, are among the amenities. Wireless Apple CarPlay is standard.

Together the A6/A7 account for 12% of Audi’s U.S. car sales. With America’s movement away from sedans and toward CUVs, Audi simply is looking to hold ground with the extensive redesigns. But that hasn’t stopped the automaker from innovating and paying keen attention to detail. 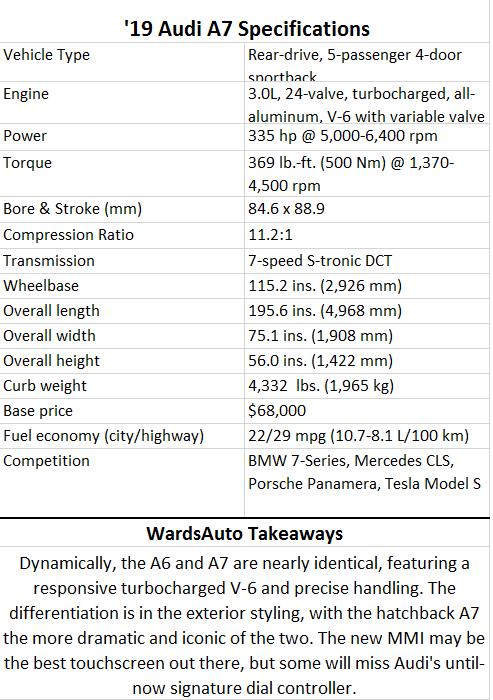