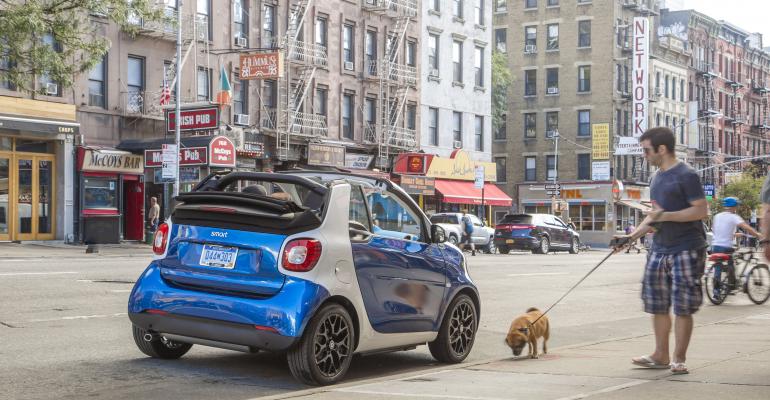 Even with an updated powertrain and driving dynamics over its predecessor, the Fortwo is no smarter an idea today than when Daimler product planners hatched the idea to bring the brand to the U.S. in 2008.

NEW YORK – The history of the U.S. automobile industry is chock full of good ideas that did not work in practice. Perhaps it is time to add the Smart Fortwo to the list.

The Smart Fortwo, redesigned for ’16 as a hardtop and tested here in cabrio form as a ’17 model, seems like a no-brainer in the conference room. It is nearly half as long as America’s perennially best-selling car, the Toyota Camry, and boasts a turning circle slightly wider than a hula hoop, so getting around tight urban spaces would be a piece of cake.

Outfitted with a 3-cyl. engine and optional 6-speed dual-clutch transmission at a lithe 2,094 lbs. (950 kg), the rear-wheel-drive Fortwo should be gloriously fuel efficient and a real cracker of a sports car. Fun exterior colors such as lava-orange metallic and whimsical trim-level names including passion, prime and proxy will appeal to people like Brooklyn hipsters dominating the nation’s style scene.

It will be easy on the eyes, too, with a funky shape to complement short overhangs in both the front and rear. Perhaps most of all, it’ll be inexpensive so young, first-time buyers will come in droves, families could enjoy the convenience of a third or fourth vehicle and empty-nesters would dig its practicality.

But even with an updated powertrain and driving dynamics over its predecessor, as well as a contemporary design, a more environmentally minded marketplace and regulatory regime, and a base price of $18,900 for the droptop, the Fortwo is no smarter an idea today than when Daimler product planners hatched the idea to bring the brand to the U.S. in 2008.

One of the car’s most celebrated traits is its maneuverability, and an effortless U-turn on one of Brooklyn’s narrow side streets is proof the Fortwo is a good fit in this city. In fact, the New York Police Dept. has snapped up 250 hardtops to replace a portion of its thousands of 3-wheel Cushman bikes with safer, more comfortable and fuel-efficient Fortwos.

But few places are as densely urban as here to warrant a vehicle dwarfed by just about anything else on four wheels. Only in Europe, where nose-to-curb parking is permitted and streets predate automobiles does size really matter.

The inline 3-cyl. motivates the Fortwo well enough, mostly because pushing this car along is akin to lifting a danseuse. Put it on the clock and the Fortwo goes from 0-60 mph (97 km/h) four seconds slower than a Chevy Tahoe.

The dual-clutch gearbox, which is meant to provide the little engine with quick shifts, instead is indecisive and on one occasion briefly left us wondering how the car’s vaunted tridion safety-cell technology would perform if a city sanitation truck barreling down Flatbush Avenue did not brake for critters. It is hardly settling under such a circumstance, either, to recall Smart marketing executives bragging how the Fortwo’s axles are positioned so closely together they provide added protection in a side-impact crash.

The rear-mounted engine lacks refinement, too. It shakes so miserably at idle the car’s front cowl rattles. It cries for a balance shaft to mitigate vibration, a baffling equipment omission from a characteristically expert powertrain group at Daimler. The turbo boost is betrayed by the reluctant transmission.

Fuel economy is surprisingly unspectacular. Over a 4-hour span of city driving, where the little engine should excel, the Fortwo Cabrio returned an average 17.5 mpg (13.4 L/100 km). That’s 15 mpg (15.7 L/100 km) below its EPA-estimated efficiency.

The Fortwo is fun to drive, for a while. It handles precisely and solidly with added structural reinforcements versus the hardtop model, and because the seats are nearly above the rear wheels there is no blindspot to check before making a lane change. Roof rails pop out for truly open-air motoring and stow in a niftily designed holder in the rear cargo area. An optional 6-speaker JBL audio system with quality sound adds to the top-down experience.

With the top up, wind noise is low and the convertible feels tightly buttoned. The power cloth top opens and closes in 12 seconds.

Interior roominess is satisfactory for two average-size adults, and the orange and black cloth seats with orange door and dash inserts of our tester are funky and whimsical. There are just a few storage places, including a nicely done cubby that pops out of the center console near the passenger’s left knee. The cabin gets one cupholder.

Connectivity and advanced driver-assist technologies are scarce at a time when they are becoming a key selling point. The Fortwo offers an available cradle for smartphones, although it looks awfully aftermarket-like. An optional, factory-installed media system arrives in a few weeks. There is a single USB outlet.

Sit in traffic for a few hours with such Spartan amenities and you will long for the gas-guzzling comfort of a big SUV or lounge-like large sedan so ironically plentiful here. Even a Ford Focus, Chevy Cruze or Toyota Corolla begins to resemble the toniest of German luxury after a couple of hours in the Fortwo.

The Fortwo’s electronic stability control system includes crosswind-assist, a thoughtful technology that mitigates lane drift when a strong gust of wind hits the side of the little 2-seater. Forward-collision alert is optional and so is a backup camera. No lane-keeping system is available.

At the end of the day, it is difficult to see the value proposition of the Fortwo, either as a hardtop or in convertible form. It is fun, funky and maneuverable, but it lacks fuel efficiency, refinement, connectivity and value at $22,810 as tested. That kind of money gets you any number of compact cars, with a back seat.

The ForTwo model line will fill out in the U.S. in just a few weeks with the arrival of the electric version delivering a range of up to 76 miles (122 km). Given the smooth, quiet operation of BEVs, it might be the smarter choice of the three.