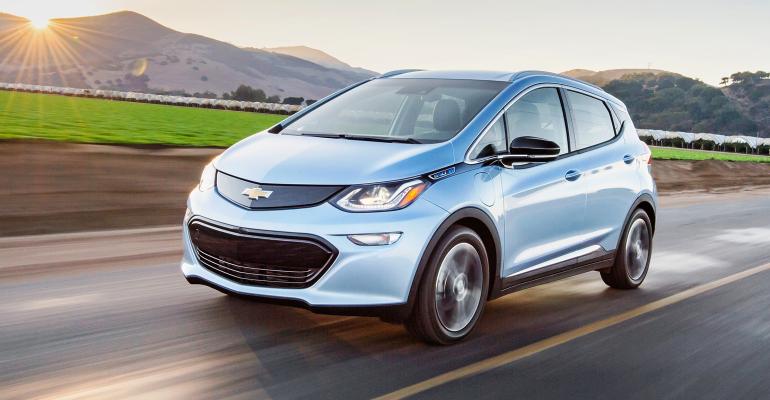 Fast, smartly designed and offering a range of 238 miles, the Chevy Bolt makes every other electric car aimed at mainstream buyers obsolete. &nbsp;

SANTA MONICA, CA – The Model T was not Henry Ford’s first car. He spent years creating vehicles that were modestly successful at best, fought ugly battles in court over patents and saw many failures before he ultimately came up with a formula that worked and could be mass produced.

So it should not be a surprise it took General Motors a couple of decades to develop the Chevy Bolt, an affordable, world-changing electric car for the masses. Fast, smartly designed and offering a range of 238 miles (383 km) or more, it makes every other electric car aimed at mainstream buyers obsolete.

The tall hatchback sits on its own unique platform and is designed around a flat, 960-lb. (435-kg) battery pack that is mounted beneath the floor and lends a significant amount of stiffness to the overall body structure.

A wide track and relatively long wheelbase combined with short overhangs give it a substantial presence and a large greenhouse gives it an airy, practical look.

Slipping behind the wheel and pushing the start button, everything inside looks new, yet familiar.

The cabin is light, cheerful and has lots of headroom and exceptional legroom in the rear for a small car. There is room for three in the back and even the middle seat offers enough headroom for an average-size adult.

A big 10.2-in. (259-mm) touchscreen sits in the middle of the instrument panel and features new graphics and EV-centric capabilities along with Apple CarPlay and Android Auto. The only thing we had to ask about operating the car was how to pair our phone with the new human-machine interface.

There are only three sets of numbers on the instrument cluster that hint the car is the most technically advanced on the road: on top is 280, on the bottom is 158 and in the middle is 215: the predicted maximum, minimum and average vehicle range in miles (451 km, 254 km and 346, km respectively.)

We hit the pedal and dodge through heavy traffic and construction in Santa Monica and Venice Beach for a while and then turn around to whistle silently up the Pacific Coast Highway. Because the regenerative brakes are good at putting energy back into the battery, time seems to stand still as our range indicator stubbornly refuses to move from 213 miles (343 km). I punch the accelerator and we are pinned back in our seats. “Wow!” my driving partner says. The car will do 0-60 (97 km/h) in 6.5 seconds, and the electric motor’s 266 lb.-ft. (360 Nm) of torque makes acceleration from about 30 mph (48 km/h) to 50 mph (80 km/h) thrilling. We feel like we can drive in the California sunshine all day. Range anxiety? What’s that?

Who knew the most disruptive electric car would be a family-friendly Chevy Bolt rather than a sleek and sexy Tesla? It costs $37,495 before a $7,500 federal tax incentive and it will be in dealer showrooms on the West Coast before the end of the year. Then sales will be expanded to all 50 states through an estimated 1,200 Chevy dealers. GM also is partnering with Lyft and Maven car-sharing services to put fleets of Bolts on the road.

The Bolt makes this remarkable feat look easy, but it wasn’t.

Seven years before Tesla was founded, in 1996, GM engineers spent more than $1 billion to develop the world’s best electric car. It was a stunner called the EV1, and it was beautifully engineered, breathtakingly aerodynamic and affordably priced.

But it only sold a few hundred copies a year, and when GM made a business decision to cut its losses and take the cars back when leases ran out, it was attacked instead of being congratulated for having the courage to make a huge bet on EV technology. That was almost a knockout punch for GM’s EV efforts.

But environmentalists complained fuel cells were a scheme to dodge near-term efficiency improvements and said hybrid powertrains for Chevy Tahoes and Cadillac Escalades were just a trick to keep selling high-profit SUVs.

And then came the Chevy Volt, an extended-range HEV so brilliant at being both an EV and an efficient gasoline-powered subcompact it vexed both Republicans and Democrats in Congress. The poisonous political environment of the day led both to attack the car in a bipartisan beatdown.

Confounded Republicans ordered a special investigation to see if the Volt was possessed by demons that might cause it to spontaneously combust while the California Air Resources Board initially refused to grant the Volt EV status because it feared Volt gasoline and electric driveline bits might be touching each other inappropriately.

Fortunately that nonsense faded and since those dark days the Volt has won over an owner base that is fiercely loyal but smaller than hoped.

It’s been a long, hard road but GM engineers and designers learned something new about electric motors, energy storage and fickle consumers every step of the way. All these travails now have enabled the automaker to roll out a practical electric car with indisputably green credentials. With an official range of 238 miles (383 km) that can unofficially be stretched to almost 300 miles (483 km) and a $30,000 price tag after federal incentives, nothing can touch it – at least not for the next 12 to 18 months.

That’s not to say the Bolt is perfect. The front seats are comfortable and supportive and feature an innovative, ultra-slim design, but lightweighting and cost-cutting take a toll on overall interior aesthetics. The instrument panel cover is soft to the touch, but it is too shiny and needs lower- gloss paint and more highly textured embossing, along with other plastic trim parts.

The HMI offers lots of new features, including EV-specific navigation capability that will find the most efficient routes and the ability in the future to connect with other Bolt drivers, but we did not find it as intuitive as the excellent system found on current Chevy products such as the Volt and Malibu.

Electrically adjustable seats also are not available. We assume adding electric motors and gears to the elegantly engineered front seats would be like hanging anvils on a spider web, but the new Hyundai Ioniq EV, due out shortly, does offer an electric driver seat and a more nicely appointed cabin. But its range is only about 110 miles (177 km) and a 200-mile (322 km) version reportedly won’t be available until 2018.

Tesla’s much-anticipated Model 3, touting a 215-mile (346 km) range and a $35,000 sticker (before federal tax incentives) will not be available until late 2017 at the earliest. Some industry- watchers predict it might not appear until 2019, given Tesla’s proven inability to meet production deadlines.

And even if Tesla manages to start shipping product by late next year, it is expected to deliver expensive, highly-optioned versions first (like most automakers), giving GM a lot of runway to establish itself.

The key is GM has gotten the Bolt’s battery right, which is the hardest part of solving the EV equation. It was co-developed with LG Electronics using 1.3 billion miles (2.1 billion km) of EV experience from the Volt.

“You usually have a battery cell that delivers the desired levels of energy or power, but not both,” says Gregory Smith, engineering group manager-Bolt EV Battery Pack. “With this cell design and chemistry we were able to deliver a battery system with 160 kW of peak power and 60 kW hours of energy.”

The battery uses a nickel-rich lithium-ion chemistry that provides improved thermal operating performance compared with other chemistries and this translates into a smaller active cooling system for more efficient packaging, GM says.

The battery uses active thermal conditioning similar to the Volt to keep the battery operating at its optimum temperature, which results in dependable battery life performance, GM says. The Bolt battery will be covered by an 8-year/100,000 mile (161,000 km) limited warranty.

After several hours of coping with California construction and traffic (and a few wrong turns) we reluctantly turned in our keys after 43.3 miles (69.7 km). In any other EV under $65,000, this would mark the beginning of white-knuckle time anyway, given the ambiguities of air-conditioning energy use and regenerative brakes.

But after starting with a range of 215 miles, the display showed we still had an expected 193 miles (311 km) of range left and a maximum/minimum of 227/158 miles (365/254 km). After 43 miles of cranking up the AC, screeching the tires and otherwise environmentally irresponsible behavior, we had burned off a measly 22 miles (35.4 km) of range.

That’s when we realized all the pain GM has gone through the past 20 years finally has paid off.