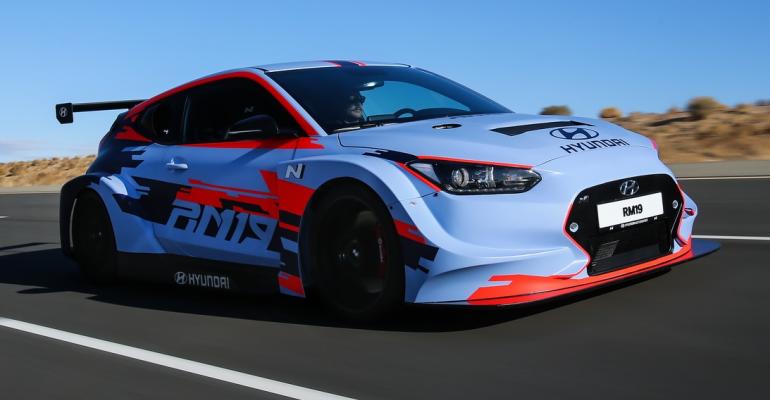 We can’t help but smile after turning a few hot laps in Hyundai’s latest performance creation, the mid-engine RM19 near-supercar. Is a production version in the works?

CALIFORNIA CITY, CA – We drive the Hyundai Palisade SUV off-road, a Veloster N hatchback on a coned autocross course, the Nexo fuel-cell vehicle at 109 mph (175 km/h) on a high-speed oval and ride shotgun in a Veloster N race car while a hot-shoe driver tries to upset our breakfast.

All of that pales in comparison to a few hot laps behind the wheel of the South Korean automaker’s latest project, the RM19, here at Hyundai’s California Proving Grounds in the Mojave Desert.

“N” is Hyundai’s performance brand, representing Namyang, home of the automaker’s R&D center in South Korea, and the company’s European Test Center at Germany’s Nürburgring. So far, the brand has developed one global performance product, the Veloster N for the U.S. market, and its global twin, the i30N.

“RM,” in Hyundai-speak, stands for “Racing Midship,” so imagine emptying the underhood area of a front-engined, front-drive Veloster and instead dropping a turbocharged 2.0L 4-cyl. from the automaker’s Veloster N Touring Car Racing model in the back seat, accessible via the rear hatch. The turbo-4, featuring a 10-to-40-hp bump over the race engine’s TCR-regulated 350-hp output, sends power to the rear wheels via a 6-speed sequential gearbox.

“Racing is to win. N is for fun,” explains Albert Biermann, Hyundai global R&D chief. “This is a mix of a race car and an N car. We are clearly going for the driving fun.”

Owing to its long, racing-designed first gear, we learn that launching the RM19 requires some deft handling of the throttle and clutch pedal (in place strictly for takeoff), keeping revs high enough to make sure the engine doesn’t sputter to a stop as the initial cog is engaged.

Once out of the makeshift trackside paddock, we hammer the RM19 around the test track, marveling at its impressive acceleration and extreme level of braking power.

Given the track configuration, we never hit top speed, running mostly in second and third gears with an occasional straight-line burst in fourth as we click through the gears via the steering-wheel-mounted paddle shifters. 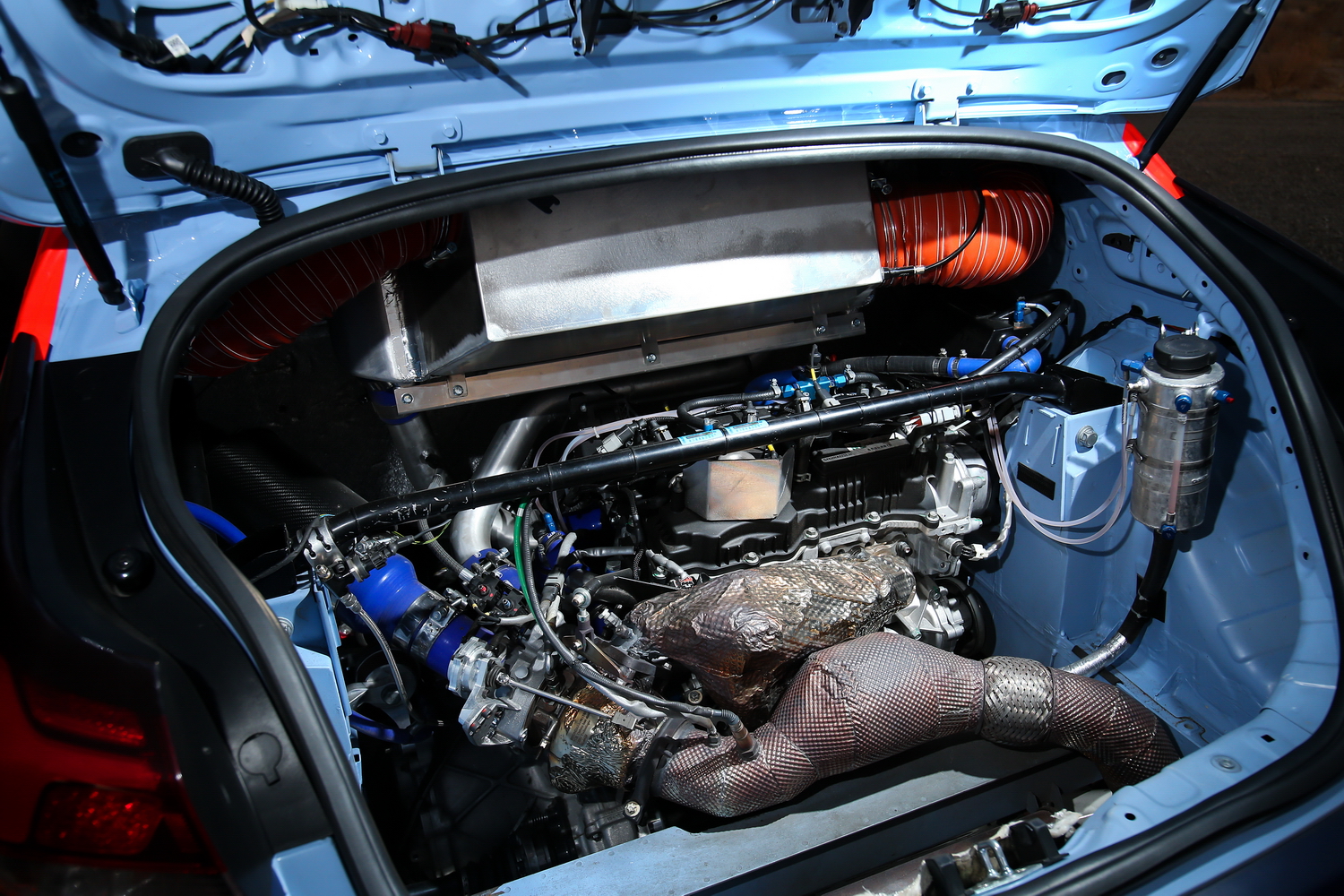 The car is stunningly quick, putting what feels like a full measure of its 295 lb.-ft. (400 Nm) of torque to the ground in an instant and across the power band.

In addition to its responsiveness, the 3,200-lb. (1,450-kg) RM19 displays sharp handling and superb grip, but with some of the quirks of a rear-engined, rear-drive sports car, as we discover when we push a little too hard on the throttle in one decreasing-radius hairpin and find the car’s limit, briefly rotating into the gravel runoff area. So yes, even a car with this level of capability is vulnerable, but it certainly makes a driver feel superhuman.

While it’s tough to gauge the exact level of performance offered by the RM19 against competitors such as the mid-engine Porsche Cayman S – the RM’s target – it’s safe to say a road-going version of this 2-seat monster definitely would turn some heads – and open some pocketbooks.

Having recently experienced a drive in the all-new mid-engine Chevrolet Corvette Stingray, a production RM19 might even give the General’s near-perfect near-supercar a run for its money.

Hyundai says the idea of a mid-engine performance car, most likely with an electrified powertrain, is within the realm of possibility as it launches more than three dozen eco-friendly models by 2025. We can only hope a road-going version of the RM19 makes the cut.

The Hyundai RM19 (right) shares some skin with the production Veloster N, but is a completely different animal from the South Korean automaker.