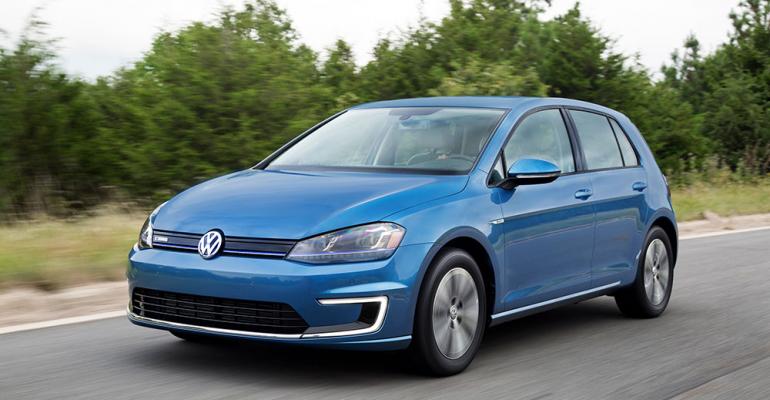 Volkswagen&rsquo;s first EV for the U.S. market comes with all the room, comfort and drivability of the standard Golf 5-door.

The battery-powered ’15-model e-Golf that goes on sale this fall not only is fun to drive, it gives up nothing in interior volume or cargo room to the conventionally powered version.

The MQB architecture, which debuted with the Audi A3 and now underpins the complete line of new Golfs, eventually will spawn some 60 different models, including VW’s pivotal CrossBlue midsize CUV that will be built in Chattanooga, TN, in time for a 2017 debut.

In creating the platform, Volkswagen made sure it was engineered to incorporate all current and future powertrains seamlessly, including its new battery-electric technology and envisioned fuel-cell system expected down the road.

The result is the battery doesn’t eat up an inch of the Golf’s 93.5 cu.-ft. (2.6 cu-m) in passenger room or 22.8 cu.-ft. (0.6 cu.-m) of cargo volume, because its dumbbell-shaped lithium-ion pack is sandwiched below the floor, protruding only ever so slightly and inconspicuously beneath the front seats.

The e-Golf loses little when it comes to performance, as well. Handling is crisp, and the car boasts VW’s characteristic solid and balanced feel along the back roads of Virginia horse country here.

Acceleration doesn’t disappoint, either. In fact, VW says the e-Golf will outrun the Golf GTI 0-30 mph (48 km/h), thanks to the instant-on delivery of its 199 lb.-ft. (270 Nm) of torque and horsepower peak of 115. After that, the GTI quickly catches up, but that initial jump should be enough pop for most EV buyers.

Drivers can select from three modes – Normal, Eco and Eco+, though the latter two range-extending settings tend to take the fun out.

Eco+ further trims horsepower to 74, torque to 129 lb.-ft. (175 Nm) and top speed to 56 mph (90 km/h), flattening pedal response even more. Air conditioning is switched off. Several warnings will appear as the battery nears depletion, and the car automatically will go into a limp-home mode to conserve energy as long as possible, VW officials say.

The e-Golf also offers three brake settings that progressively increase regeneration and extend the driving range. They can be selected with the 1-speed automatic transmission’s gear selector. That makes it possible to slow the car relatively smoothly, and ultimately bring it to a full stop, by shifting through the braking modes in a fashion similar to stepping down gears with a manually shifted automatic, though most drivers likely will pick the mode they’re most comfortable with and leave it there.

Starting at $35,445 (not including $820 destination and handling fees), or available to lease at a competitive $299/month (after $1,999 downpayment), the electric model is nicely equipped, settling in near the top end of Golf’s trim packages, with navigation system, keyless access, heated seats, leather-wrapped steering wheel, rearview camera, Park Distance Control and VW’s Car-Net telematics as standard.

Exclusive blue accent trim on the gear selector and unique gauges that provide readouts on battery performance also highlight the cabin, which benefits from some additional insulation that ensures a quiet ride.

The exterior is distinguished by LED headlamps, slightly different bumpers and exclusive badging and aerodynamic features, plus low-rolling-resistance tires.

A rarity is the lack of an active-cooling system for the e-Golf’s battery pack. Chevrolet’s Volt and Ford’s Focus EV use liquid-cooling, and Nissan’s Leaf has an air-cooled system. VW engineers appear confident the battery will not suffer, saying only under extremely hard and protracted acceleration will temperatures rise enough to degrade performance.

VW developed the battery in-house, using 264 individual prismatic cells supplied by Panasonic. The 323V pack consists of 27 modules with six or 12 cells each, combining for overall capacity of 24.2 kWh.

A complete recharge from empty takes about four hours. VW has tied up with Bosch to offer a 240V home-charging unit. The device costs about $500 and installation varies depending on complexity, starting from about $200-$300. The supplier partners with other automakers as well, such as BMW, and says it has sold roughly 25,000 chargers in the U.S. to date.

Buyers also will be able to recharge at their local VW dealership, which will be installing fast chargers that can fill the battery to 80% capacity in 30 minutes.

The e-Golf goes on sale in the U.S. in November at select dealers in zero-emission-vehicle markets such as California, Oregon, New York, Maine, New Jersey, Massachusetts and a handful of other East Coast states.

It’s a pretty good runabout for those whose driving cycle fits within the confines of EV range, and at $299/month it’s not a bad lease deal.

For those who don’t want to worry about how far they’re driving, the Golf’s new 2.0L TDI clean diesel might be the better option. It bases at $27,995 with a manual transmission – a $3,000 reduction from ’14, comes pretty well equipped, offers plenty of pep, gets 45 mpg (5.2 L/100 km) highway and boasts a range between fill-ups the e-Golf can only dream about.