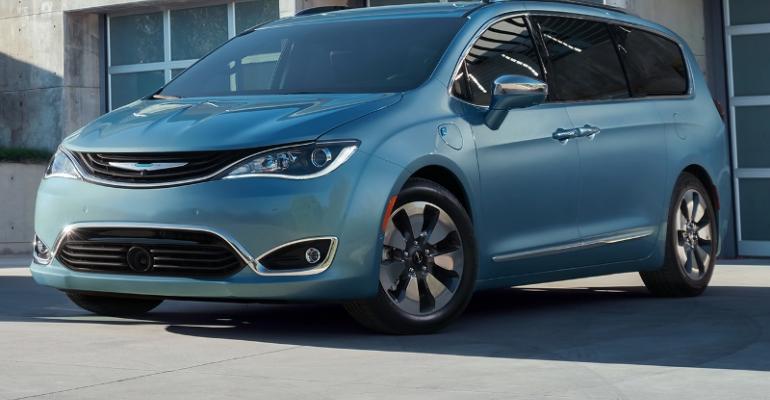 Plug-In Pacifica Goes the Distance, And Then Some

We’re very familiar with Chrysler’s all-new minivan, having logged a considerable number of miles in it as we evaluated it for both our Wards 10 Best Interiors and the inaugural Wards 10 Best UX competitions. The Pacifica took home a trophy in each of those categories and the plug-in hybrid powertrain is a nominee for a Wards 10 Best Engines award.

At first glance, Chrysler’s first-ever mass-market electrified minivan for North America appears fairly similar to the standard gasoline-powered model, with the only obvious differences being an added charging port on the front fender, teal accents and “e” symbols that mimic common computer “power on” buttons liberally applied to cosmetically reinforce the electric message. The hybrid’s interior is trimmed in black and metal touches, with ice-blue stitching and black piping seat accents.

Kevin Mets, chief engineer, says the Pacifica’s styling is an automatic aid to the hybrid model because its slick aerodynamic profile already reduces the amount of power required to move the vehicle through the air.

Further examination reveals the more significant alterations. The underfloor tubs now are filled with a 16-kWh lithium-ion battery pack provided by LG Chem, eliminating the van’s convenient Stow ’n’ Go function for the second-row seats. Removable captain’s chairs replace the stowable seats; the third row still can be folded flat into the rear floor. Also, there is no option for the built-in vacuum system because that space is taken up by hybrid hardware.

Up front is a completely revised instrument panel with hybrid gauges reporting such values as state of battery charge, EV miles available and overall efficiency. Five dash-top lights clearly indicate when the battery is charging.

The hybrid system pairs a 3.6L Pentastar V-6 with an FCA-developed dual-motor, electrically variable transmission. Compared with the standard Pacifica V-6, the hybrid engine is modified to run on an Atkinson cycle and uses a higher 12.5:1 compression ratio and unique cams, pistons and valves. The engine also eschews a cooled exhaust-gas-recirculation system and variable valve lift and has no need for a starter or generator.

Many hybrid systems use the large motor to drive the wheels with or without the gas engine, but the large motor never works in tandem with the smaller motor that primarily serves as a starter-generator.

In the Pacifica Hybrid, the opposite is true. An electrically variable transmission, trademarked eFlite, uses a planetary gear set and a one-way clutch to create a compact and highly efficient powertrain that draws on both electric motors and the gas engine to drive the wheels.

“The car will always be in the most efficient mode possible,” says John Gibson, chief engineer-electrified powertrains.

Charging via a 240V, 6.6-kW onboard charger takes about two hours, while 120V household current replenishes the battery in about 14 hours. Five large dash-top blue lights indicate when the battery is properly plugged in and visibly show its state of charge.

The entire battery pack is actively cooled and heated to maintain the most efficient operating temperature. A 12V battery serves as a stabilizer for the electrical systems and provides power for accessories when the hybrid powertrain isn’t running.

Driving the Range and Beyond

Driving the Pacifica Hybrid doesn’t require a “green” foot to get the most out of the system. Whether driving in city traffic, on freeways or along winding mountain roads, we give little thought to our fuel efficiency – and still post some surprising numbers.

The hybrid doesn’t nag you to drive efficiently, but rather offers coaching via the instrument panel with the display illuminated in green when operating in EV mode and blue when the gas engine joins in. Gauges clearly show state of charge, fuel level and electric and fuel range.

Whirring silently out of the staging area with an indicated 100% charge and 30 miles (48 km) of range, the combined output of the electric motors provide ample power for stop-and-go city and suburban driving, similar to the kind of commute an owner might experience on a daily basis.

What’s more, unless you need instant power for passing or rapid acceleration, the V-6 doesn’t kick in even at expressway speeds as long as there’s enough juice in the batteries to power the motors and you don’t step all the way onto the accelerator. FCA says top speed in all-electric mode is 75 mph (121 km/h).

We run on pure electric power for the first leg of the drive, a 28-mile (45-km) jaunt that depletes 90% of the charge, leaving us with an estimated 5 miles (8 km) of EV range.

When the engine finally does fire up, either due to battery drain or a heavy accelerator, it’s fairly imperceptible, creating no unexpected surges in the powertrain response. Once we run our Pacifica Hybrid batteries to zero, the engine joins in, but there’s no more sound than one might expect from a V-6.

The Pacifica Hybrid does a nice job of seamlessly shifting from electric motor to engine, or combination of engine and motor, and back again. We found driving in colder climates can quickly deplete battery power due to ambient temperature and use of heating and other accessories, but we also note the vehicle will continue to cycle into full-EV mode at lower speeds even when the battery gauge reads empty.

As noted, we’ve written about the Pacifica and its capable handling and quiet and comfortable ride, and the hybrid version doesn’t diminish those impressions. Though the hybrid carries an extra 650 lbs. (295 kg) including a 350-lb. (159-kg) battery pack compared with the gasoline-engine Pacifica, the extra weight rides low in the chassis so, if anything, this model feels even more grounded and stable.

Quietness is assured through active noise cancellation, making the whir of the electric drive motors and even the electric power steering more audible.

Chrysler anticipates owners will drive a lot of electric-only local miles in the Pacifica Hybrid, possibly for weeks, so the vehicle monitors the average age of the fuel and will start the engine automatically to burn through fuel more than three months old.

The Pacifica Hybrid goes on sale in December with availability increasing early next year, priced at $41,995 for the Premium trim and $44,995 for the top Platinum model. Prices do not include $1,095 destination charge. The minivan qualifies for the full $7,500 federal tax credit for EVs.

Competition in the minivan segment, or even in 7-seat CUVs, doesn’t exist. The closest rivals might be traditional minivans or 5-seaters like the Toyota Prius V and electrified versions of the Toyota RAV4 and Highlander.