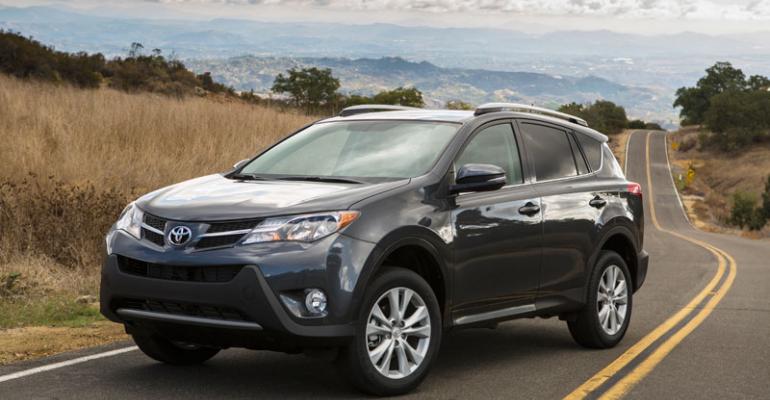 Toyota&rsquo;s next-generation ute is cute no more, veering more toward athleticism in appearance and performance. However, it lacks some of the mom-oriented features that have helped make the Honda CR-V a top seller.

SCOTTSDALE, AZ – The Toyota RAV4 helped start the compact cross/utility-vehicle craze in the U.S. with its 1995 introduction.

While there is more than double the competition of 17 years ago, the segment’s oldies-but-goodies still reign supreme.

Honda's CR-V, another early entrant and the RAV4’s No.1 cross-shop, has been dominating the sector in recent years. This year, CR-V sales, driven by a new generation that debuted a year ago, tallied 255,919 units through November, almost 100,000 more than the RAV’s 157,526.

We agree with Toyota that the new RAV4 is better looking inside and out, more fun-to-drive and consumes less fuel than the outgoing model.

But in other ways the predecessor was better, possessing heavier, more direct steering and creature comforts that have been dropped such as a sunglasses holder and tall visors with extenders.

The current CR-V has deficiencies, too, largely in areas where the new RAV4 excels, making the next-gen Toyota an on-par contender.

The biggest change for the '13 RAV4 is its appearance. Prodded along by CEO Akio Toyoda, company designers gave the “cute ute” a more expressive face. A prominent new nose, similar to the treatment Mitsubishi and Nissan CUVs receive, is balanced by a simple, single horizontal-bar grille.

The new RAV4's horizontal taillights and high plate holder echo BMW’s X3 – a good look to copy. Many of the visual cues, such as a more raked roofline and new rear spoiler, also improve aerodynamics.

For ’13, Toyota has ditched the available V-6, unnecessary in such a small vehicle, in favor of the ’12 RAV’s 176-hp 2.5L 4-cyl. The engine also is in the ’13 Camry. The powerplant is sufficient for the mall-shopping and school-drop-off duties the CUV will be called on to perform, although mid-range torque could be better for highway passing.

The LE- and Limited-grade RAV4s tested here generally are quiet but protest loudly when climbing hillier terrain. However, the CR-V driven here, with its 185-hp 2.4L 4-cyl., is noisy even during steady, flat-road cruising.

The RAV’s 2.5L now is mated to a 6-speed automatic instead of a 4-speed. The two additional gears, plus shorter ratios, improve fuel economy and optimize acceleration, Toyota says. A new "flex start" torque converter keeps engine speed low when accelerating from a standstill to conserve fuel, a feature previously available only on the top gears of the outgoing 4AT.

Sport mode provides a good jolt, decreasing electric-power-steering effort 20% and making for faster shifts, although the Mazda CX-5 is a more athletic choice.

Most dimensions of the '12 RAV4 carry over for the ’13 model, but weight is up slightly for both front-wheel- and all-wheel-drive models. Toyota attributes the increase to additional wiring and safety technologies.

The now-automatic AWD, which uses information from the CUV’s electronic controller to distribute up to 50% of front torque to the rear, likely is perfectly fine for paved-road, inclement-weather scenarios. But based on a harsh gravel-road experience here, the system is not suitable for off-roading.

Most interior dimensions have grown, save for front and rear headroom, due to the lower roofline, and second-row leg and hip room, although the former isn’t noticeable as space still is generous.

Toyota claims class-leading cargo volume of 73.4 cu.-ft. (2.1 cu.-m) with second-row seats folded. With those seats up, cargo space falls shy of the CR-V’s. The Honda also has a taller opening, helped by a lower load floor, reflecting its stroller-lifting-mom slant.

Moms should like the RAV4’s new adjustable tailgate, standard on Limited models. Holding a button for a few seconds sets the maximum opening height of the tailgate, good for those vertically challenged.

Toyota designers and engineers paid particular attention to the RAV4's cabin, upping material quality and limiting hard plastic. A large soft-touch piece spans the dash. Stitching is simulated in the LE but the real deal in the Limited. Toyota switches to a circular-knit headliner in lieu of rat fur.

Advantage goes to the RAV4’s seats, though, one of the vehicle’s very best features. They are comfortable and enveloping, with a decent-length bottom seat cushion for good thigh support.

The RAV4 has a nicer steering wheel than the CR-V, but the center-stack controls are a draw: the RAV’s are better-placed, while the CR-V’s are simpler.

In short, the RAV4 is better-suited to non-parents than families, based on the CR-V’s amenities such as the low load floor and optional rear-seat entertainment system. The RAV4, with its new Sport mode, is the CUV to buy pre-baby, post-teen.