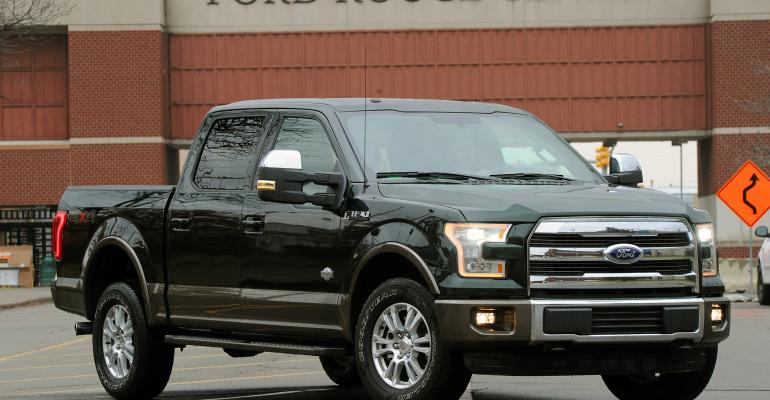 <p><strong>The all-new &rsquo;15 F-150 is light, handles better than any pickup before it, and retains its ruggedness and capability.</strong></p>
Vehicles>Test Drives

The all-new &rsquo;15 F-150 is light, handles better than any pickup before it, and retains its ruggedness and capability.

SAN ANTONIO – Time will tell whether the new aluminum-intensive ’15 F-150 will redefine the fullsize pickup segment. But there’s one thing for sure, it’s a darn good truck.

The all-new ’15 F-150 is light, handles better than any pickup before it and retains all the ruggedness and capability that has made the F-150 the best-selling pickup for 37 consecutive years.

The first thing you notice behind the wheel of the new F-150 is the 700-lb. (317-kg) reduction vs. the outgoing truck made possible by the aluminum body, particularly when cornering.

Nimble isn’t often a word used to describe a fullsize pickup, but it fits here, as the F-150’s handling attributes belie its large proportions. The truck acts more like a midsize sedan than a pickup.

The F-150’s weight loss particularly is noticeable with the new 2.7L direct-injected twin-turbo EcoBoost V-6, one the smallest engines ever installed in a fullsize pickup. The mill pumps out 325 hp and 375 lb.-ft. (508 Nm) of torque, so it has more than enough power for traditional pickup duties and comes standard with a stop/start system.

The fuel-sipping mill and light aluminum body on the XLT SuperCrew model combined for 21.3 mpg (11.0 L/100 km) in highway/city driving here, much of it fairly aggressive.

Official EPA figures are yet to be released, but Ford appears to have hit the mark with this engine and body combo, as most fullsize pickups struggle to break the 20 mpg (11.7 L/100 km) bogey in combined driving.

The 5.0L normally aspirated V-8 gets a number of upgrades for ’15, including a new long-runner intake manifold, revised intake cam duration and pulse-separated exhaust manifolds. The modifications nudge output up to 385 hp and 387 lb.-ft. (524 Nm) of torque, an impressive jump from the previous engine’s 360 hp and 380 lb.-ft. (515 Nm).

The 5.0L V-8 is plenty powerful, but for slightly more money, about $700, the 3.5L V-6 is the better choice, with a higher tow rating, nearly the same hauling capacity and superior fuel economy.

A normally aspirated base-level 3.5L V-6 rounds out the lineup. Ford did not make one available for testing, but on the ’14 F-150 the carryover mill proved capable, yet uninspiring. That said, the engine, producing 283 hp and 255 lb.-ft. (345 Nm) of torque should feel more powerful in the lightweight ’15 F-150, making it a decent choice for the budget-conscious and fleet buyers in need of a heavy-work truck.

As well as the F-150 handles on road, it performs just as well off it. Along an aggressive off-road course here, a pickup equipped with the 5.0L V-8 and 4-wheel drive plunges through knee-deep puddles, rockets over exposed boulders and easily climbs steep inclines. While unlikely F-150 owners ever would put their trucks through such rigors, it’s nice to know the capability is there.

The most noticeable exterior difference for ’15 is the front fascia. While still retaining the prominent tri-bar grille, its shape has changed, with a more rounded appearance where the grille meets the hood. The grille also has been angled back, which directs airflow down the sides to reduce drag.

The headlamps are reworked into a U-shape, while square fog lamps replace the round ones on the outgoing model.

The top of the tailgate has been reworked to serve as a spoiler, while the cargo box has been made narrower than the cab. Both changes were made to further reduce drag.

Sheetmetal changes are minor. The new F-150 doesn’t offer the eye-catching styling of the Ram 1500. It takes more of a function-over-form approach, with every change meant to make the truck more aerodynamic. It would help if the design were a little more flashy.

Interior changes are minimal, but depending on trim level you can go from bare bones to all-out luxury, with top-end options such as the King Ranch with its Western motif and the sleek Platinum offering.

A couple of changes worth noting include the addition of a well-placed beltline armrest on the front doors and the repositioning of entertainment information on the center stack, which Ford says caters to those who use their trucks for work and want vital vehicle information in the instrument-panel cluster.

The updates build on what the previous interior offered, namely comfortable seats, a meaty steering wheel and a plethora of easily accessible driver and vehicle information.

The ’15 F-150 indeed raises the bar in the ultra-competitive fullsize pickup segment. Now it’s up to the rest of the industry to respond.