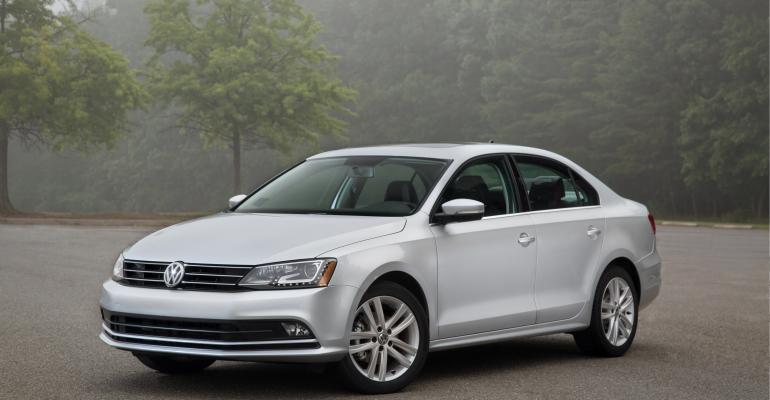 VWA has led the U.S. in the diesel category, where TDI take rates have hovered around 40% for the Passat sedan, 35% for the Jetta and 23% for the brand overall. So the expanded availability of the even better new 2.0L should be a hit.

Besides the all-new Golf that finally is hitting U.S. shores, Volkswagen of America has little ammo at its disposal for the ’15 model year as it battles to reverse a sales slide that has seen volume for the VW brand tumble by double-digit rates so far in 2014.

But it does have the diesel.

The all-new 2.0L TDI, which bowed first in the Golf earlier this year, now can be found under the hood of the more popular Jetta, which also gets a few nips and tucks to hold the sedan over until a major redesign and shift to VW’s MQB platform for 2017.

VWA has led the U.S. in the diesel category, where TDI take rates have hovered around 40% for the Passat sedan, 35% for the Jetta and 23% for the brand overall. So the expanded availability of the even better new 2.0L should be a big deal in the marketplace.

“What we’re really proud of is our unique-selling TDI,” Mark Barnes, vice president-sales, noted in April – before the new 2.0L even hit the market.

The new diesel, imported from Europe for now but destined for production at VW’s Silao, Mexico, engine plant within the next couple of years, is rated at 150 hp at 3,500 rpm, on par with but coming on a little quicker than the Chevrolet Cruze’s 151-hp peak at 4,000 rpm.

The move to the new 2.0L, which now features a selective catalytic reduction exhaust aftertreatment system like in the Cruze, marks a big efficiency play for VW. This sixth-generation engine represents the first time the German automaker has been able to use identical diesels in Europe and the U.S., where emissions standards vary.

VW sells about 400,000 of the diesels in Europe and 100,000 in the U.S., so making the two match means production for this market is much more cost effective, mitigating the addition cost of the SCR system.

More importantly, the engine proves a nice fit in test drives with the new Jetta near VWA’s Virginia headquarters and in and around the Detroit area in the ’15 Golf.

At initial blush, the off-the-line jump in the automatic-equipped cars is a bit disappointing. But once you adapt to the TDI’s driving characteristics and learn to access full torque by coaxing the turbo more quickly into spool-up mode, the fuel-frugal Golf/Jetta becomes quite fun to drive.

The cars perform even better when toggled into Sport mode with a flick of the gear selector, a move that eliminates the rushed upshifts that maximize fuel economy but wring some of the life out of driving. In more than 400 miles (644 km) at a variety of speeds and under various conditions around town with the Golf TDI, we easily topped 40 mpg (5.9 L/100 km), so sacrificing a few mpg in favor of fun is highly recommended.

For even more spirited driving, the 6-speed dual-clutch transmission can be completely controlled via paddle shifters.

There’s no mistaking that this is a diesel when standing outside the car, but inside it’s hard to tell. The cabin remains quiet at speed, and there’s only a tiny hint of shake through the steering wheel. Overall on the refinement front, the Jetta engine gets a slight nod over the Cruze diesel.

Other tweaks to the Jetta sedan for ’15 are far less obvious, so no need to rush to the showroom to see it.

Inside Ready for MQB

The biggest retooling inside centers on a reversal of the stalk controls around the steering wheel. What was on the left side of the ’14 model is now on the right, and controls that were on the right have been moved to the left, matching the new Golf.

This will either delight or infuriate current Jetta owners who make the switch, but the main reason for the move is to prepare the car for its migration to the MQB platform, where consistency from one model to the next is the hallmark of the architecture’s mass-production flexibility.

Maybe more critical is some re-engineering you don’t see. VWA says the Jetta’s body-in-white has been reconstructed to improve its crash performance, and the automaker expects the ’15 model to lead its class in independent testing.

In addition to the diesel, the Jetta can be had with a host of carryover powertrains, including a base, naturally aspirated, 115-hp 2.0L gasoline engine and the midlevel 1.8L turbocharged 4-cyl. that delivers 170 hp. Transmission options include a 5-speed manual or the 6-speed DCT with the two gasoline engines, while the diesel offers a 6-speed manual along with the twin-clutch automatic.

A hybrid model continues to top the line, mating a 1.4L TSI engine with a 20kW (27-hp) electric motor.

Prices, not including the $820 destination fee, start at $17,325 for the S trim and ratchet up to $21,640 for the base diesel model that adds such things as heated seats, cruise control, iPod cable and satellite radio. Stickers top out at $31,670 for a Jetta Hybrid SEL.

Pricing begins at $21,640 for the diesel Jetta S. And VW says safety systems such as blindspot detection, rear traffic alert, forward collision warning and park-distance control are available in less-costly packages. Golf TDI 2-door prices have been lowered $3,000 for the new model, matching a move made with the Jetta in ’14.

With only modest tweaks, the new model isn’t likely to draw the eyes of Corolla, Civic, Cruze and Focus intenders in greater numbers, nor is there a compelling reason for owners of ’11-or-newer Jettas to trade in.

But thanks mainly to the new diesel, this latest version of VW’s biggest seller has gotten just a tiny bit better.