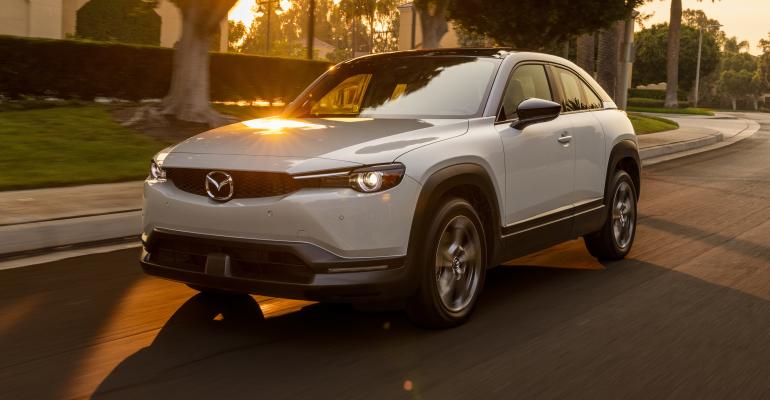 Based on the CX-30, Mazda’s battery-electric MX-30 debuts in California before going nationwide in a year.
Vehicles>Test Drives

Mazda’s MX-30, a precursor to a portfolio of electrified models, is short on range and neck-snapping performance, but high on handling prowess. Mazda likes it that way, but will the buying public agree?

IRVINE, CA – Mazda dips its toe in the electric-vehicle market with the MX-30, a small CUV with only 100 miles (161 km) of range but one that cuts a wide swath when it comes to the Japanese automaker’s alternative-vehicle future.

A peek under the hood tells the story: There’s a huge open space next to the electric powertrain (see inset below), a void reserved for a rotary engine that will power a generator as part of a plug-in hybrid-electric version of the MX-30 for the U.S. market.

That PHEV and a series of hybrids and other pure electrics are planned for introduction between 2022 and 2025. The chassis also will underpin a range of other powertrains globally, depending on market.

A focus on the future minimizes the obvious shortcomings of Mazda’s first electric entry in the North American market: It’s a BEV that doesn’t win on pricing with similar-range competitors such as the Nissan Leaf and the Mini Cooper SE, and it doesn’t win on range compared with slightly higher-priced offerings such as the Kia Niro and Tesla Model 3.

Both its relatively small, 35.5-kWh Panasonic lithium-ion battery providing about 100 miles of range and its Hitachi-supplied 107-kW (143-hp), 200-lb.-ft. (271-Nm) single-motor drivetrain seem a decade out of step compared with most BEVs entering today’s market. 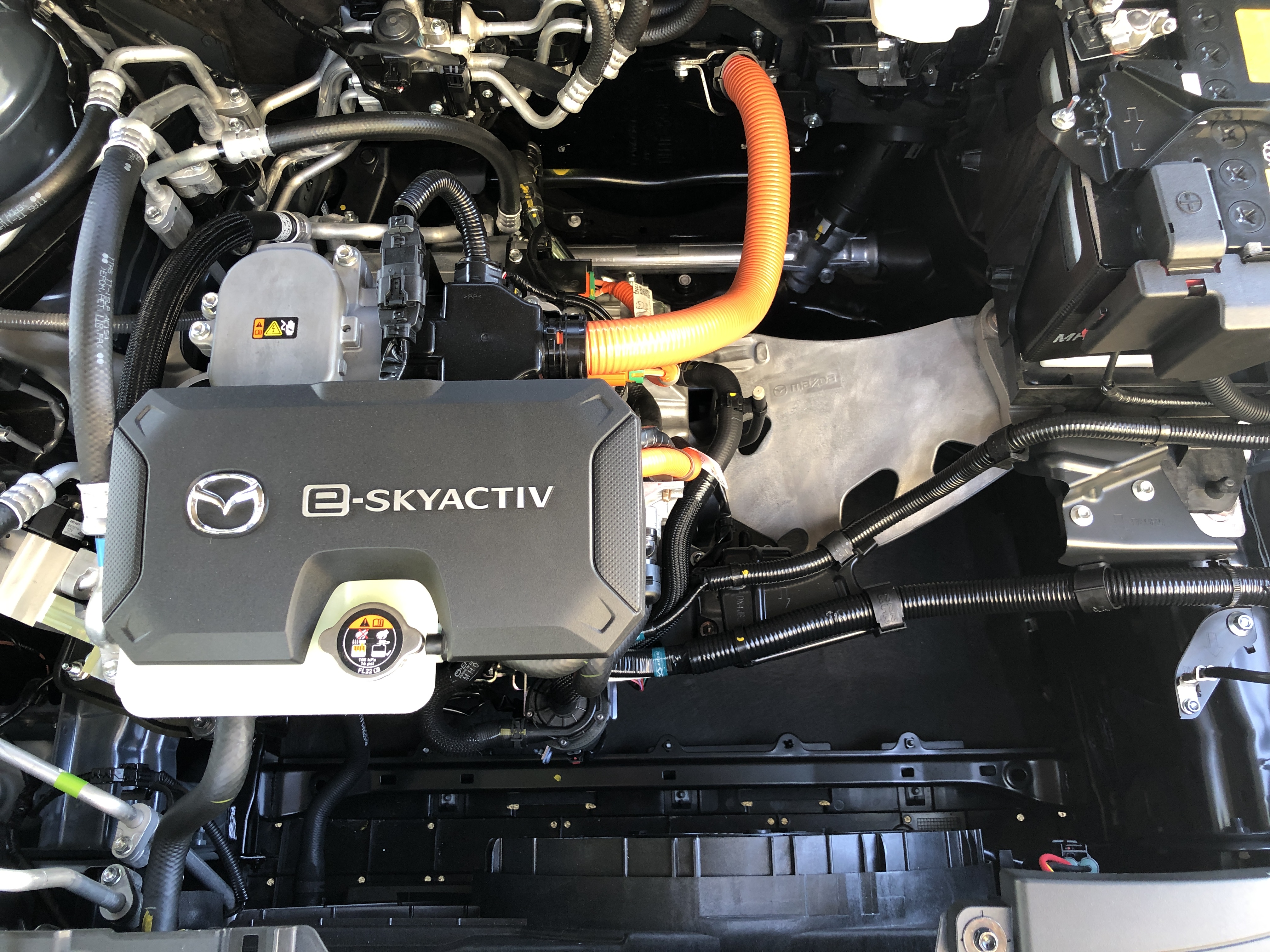 Mazda says that’s by design. The car is intended for young, urban buyers who don’t need a long-range vehicle, or those looking for a second car for emission-free commuting and around-town errands.

For longer, out-of-town trips, Mazda will allow MX-30 buyers to borrow a gas-engine Mazda from a dealer for up to 10 days per year during the first three years of ownership.

“There’s no reason to drag around 300 miles (483 km) of battery weight when you only need to go short distances,” says Jay Chen, powertrain manager.

Instead, Mazda engineers focused on propulsion system response and driving dynamics that are clearly demonstrated during our test drive here in Southern California.

Chen says the MX-30 powertrain is tuned to mimic the response of a base-engine, ICE-powered Mazda with smooth power delivery and minimal regenerative braking response, with the objective of reducing the level of jerkiness compared with most BEVs.

With acceleration comparable to that of a gas-powered non-turbo CX-30 at about 8.0 seconds to 60 mph (97 km/h), the MX-30 falls two seconds short of BEVs such as the Volkswagen ID.4 and the Ford Mustang Mach-E.

The powertrain offers five levels of regenerative braking effort, including two that reduce that response, a pair that amp it up and a neutral setting, all accessed via steering-wheel paddles.

The result is a powertrain without the kind of assets typically touted in today’s BEVs. There is no instant-on, zero-rpm torque at launch, nor does the MX-30 exhibit the kind of aggressive regenerative braking that allows for one-pedal driving capable of bringing a vehicle to a complete stop without applying brake-pedal pressure.

Rather, the MX-30 offers smooth acceleration and braking that Mazda believes is more in sync with what drivers have come to expect in their ICE vehicles. Time will tell if that’s a legitimate selling point, or an excuse for having engineered a vehicle that doesn’t take advantage of what might be considered inherent pluses of electric powertrains.

Regardless, during our 61.3-mile (98.6-km) drive in near-perfect 75° F (24° C) conditions, we averaged 3.1 miles (5.0 km) per kWh, with regenerative braking adding a few extra miles to the reserves. The readout on the instrument cluster reported 41% of the battery still in reserve at the end of the drive, good for another 42 miles (68 km).

The responsiveness of the electric powertrain and the system’s ability to apply subtle regenerative braking to balance the chassis – something not possible with an internal-combustion powertrain – actually makes e-GVC Plus better than its non-EV counterpart, Coleman says. 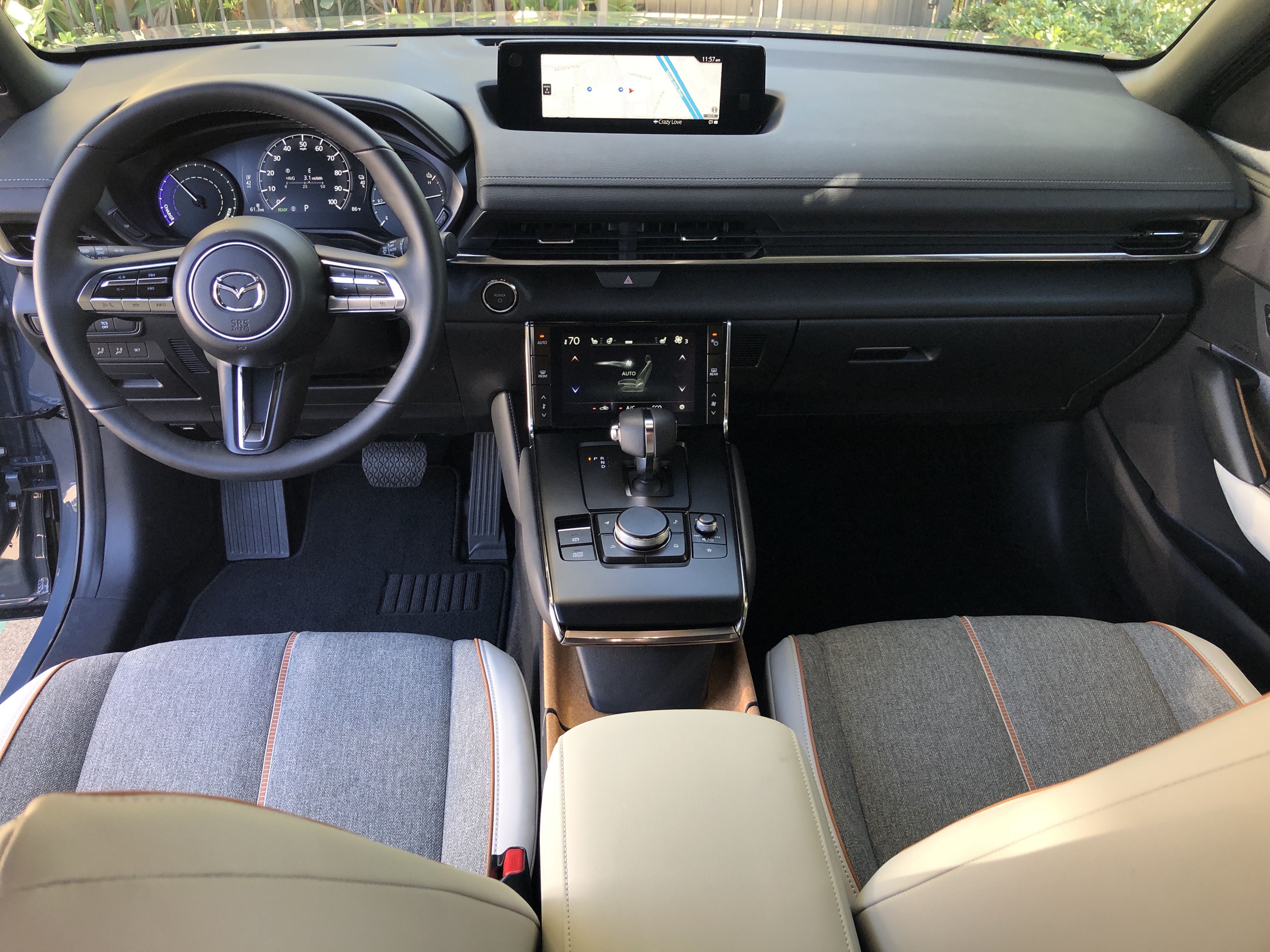 We tend to agree. The smooth application of power and regen combined with the 683-lb. (310-kg) battery mass tucked low and rearward in the chassis give the MX-30 a planted handling feel.

Despite its front-drive architecture (shared with the CX-30), the car exhibits zero understeer as the rear tires dig in while the fronts pull the vehicle through corners. That’s despite carrying around an extra 400 lbs. (181 kg) compared with the CX-30.

Love it or hate it, Mazda pipes in an accompanying artificial propulsion sound that matches the level of torque being used; we found it acceptably subtle most of the time.

Mazda employs unique pillarless doors on the MX-30, with the front doors pivoting 90 degrees while the rear doors swing nearly as far, providing wide-open access to the interior.

The interior is pleasantly appointed and functional, with the application of earth-friendly recycled plastic in the door trim and cork as a primary accent element. Rear seat room is tight, but knee and legroom is aided by deep recesses in the front seatbacks.

Mazda is starting out small with the MX-30, with plans to sell just 560 copies in the coming year, only in California. Next year brings nationwide availability of the MX-30 BEV, along with the addition of the rotary-engine series PHEV.

An additional PHEV and a CUV hybrid follow by 2025 in the U.S., providing the brand with what it says will be a foundation for further expansion of its BEVs and other electrified offerings depending on market demand and regulatory requirements. Mazda says it expects to offer three BEVs, five PHEVs and five hybrids globally by 2030.

The MX-30 goes on sale this month, priced at $33,470 for the base model and $36,480 for the premium plus package that includes Bose audio, parking sensors, front cross-traffic sensing and 18-in. wheels. Prices do not include $1,175 for delivery. 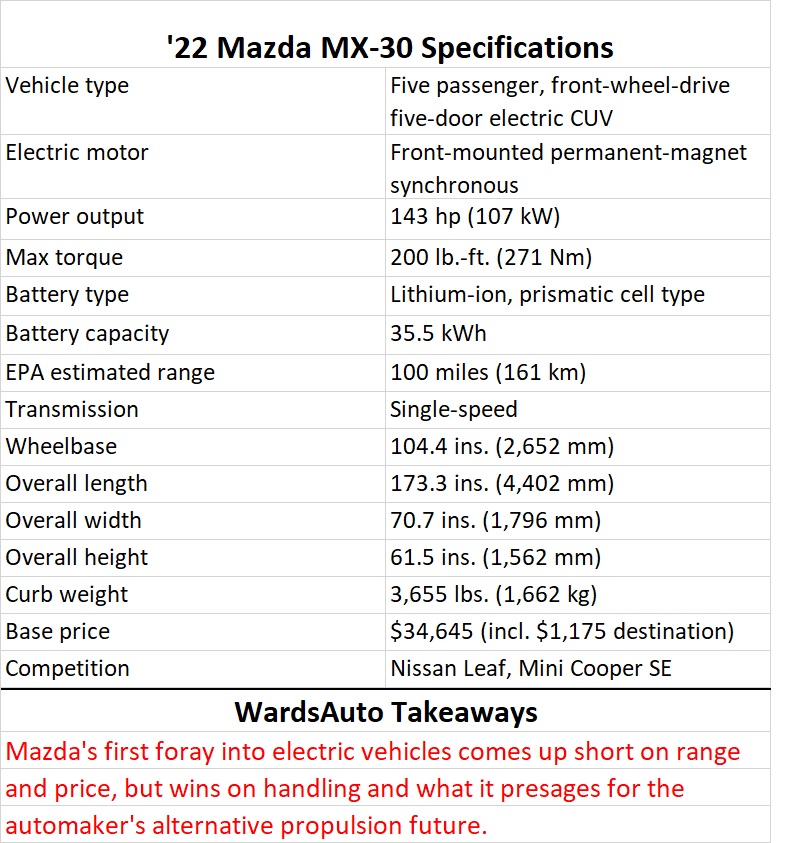