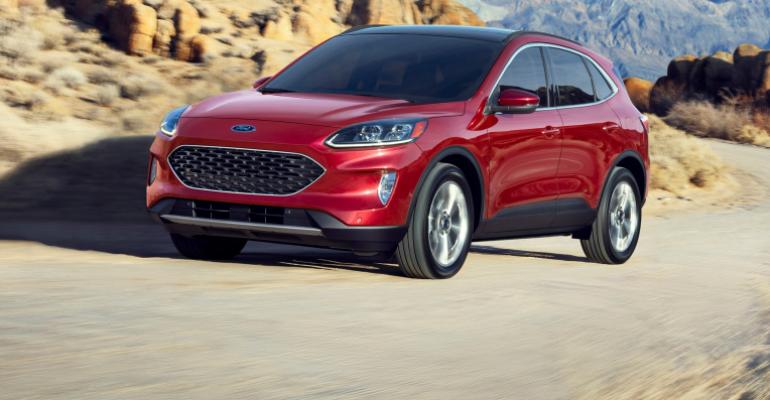 The all-new fourth-generation Ford Escape includes two hybrids, marking a return to a niche Ford owned from 2004-2012 when it sold 114,071 electrified Escapes in a market devoid of competition.

LOUISVILLE, KY – The electrification push is on at Ford, where in the past few months the Dearborn automaker has deployed an efficiency-oriented Ford Explorer Hybrid, a performance-tuned Lincoln Aviator Hybrid, and now follows up with the return of not one, but two, Escape hybrid options.

The hybrid combining a 200V electric motor and a 2.5L Atkinson-cycle 2.5L 4-cyl. arrives in dealerships this month as one of four powertrains offered in the all-new ’20 Escape, including two turbocharged gas-engine options, a 1.5L 3-cyl. and a 2.0L 4-cyl. A plug-in, front-wheel-drive-only version of the hybrid with an estimated 30-mile (48-km) electric range is due next spring.

Improvements to the 181-hp, 190-lb.-ft. (258-Nm) 1.5L include deactivation of a single cylinder and the addition of a balance shaft. While Ford says the net effect is a 20% improvement in fuel efficiency and a 10% performance gain, the small engine vibrates noticeably at idle and in a brief drive struggles to power our 3,300-lb. (1,497-kg) front-drive tester.

The 2.0L offered in SEL and Titanium trims clearly is the cream of the crop in terms of output and performance, sending 250 hp and 280 lb.-ft. (380 Nm) of torque via an 8-speed automatic transmission to the vehicle’s Intelligent All-Wheel Drive system that features a fuel-saving AWD disconnect.

The uplevel 2.0L powertrain is punchy, providing ample torque at launch as well as on demand at higher speeds, giving the driver a high level of confidence to match the vehicle’s spry handling characteristics. Assured brake response and surprisingly agile cornering capability are hallmarks of the new Escape.

But if fuel economy is your measure, consider paying the $1,160 premium for the 200-hp hybrid powertrain, standard in SE Sport and Titanium trims. Ford is still awaiting official EPA numbers for the hybrid, but estimates fuel economy should be about 39 mpg (6.0 L/100 km) combined, or about 50% better than the outgoing front-drive ’19 Escape fitted with a 1.5L 3-cyl. turbo and 6-speed automatic. 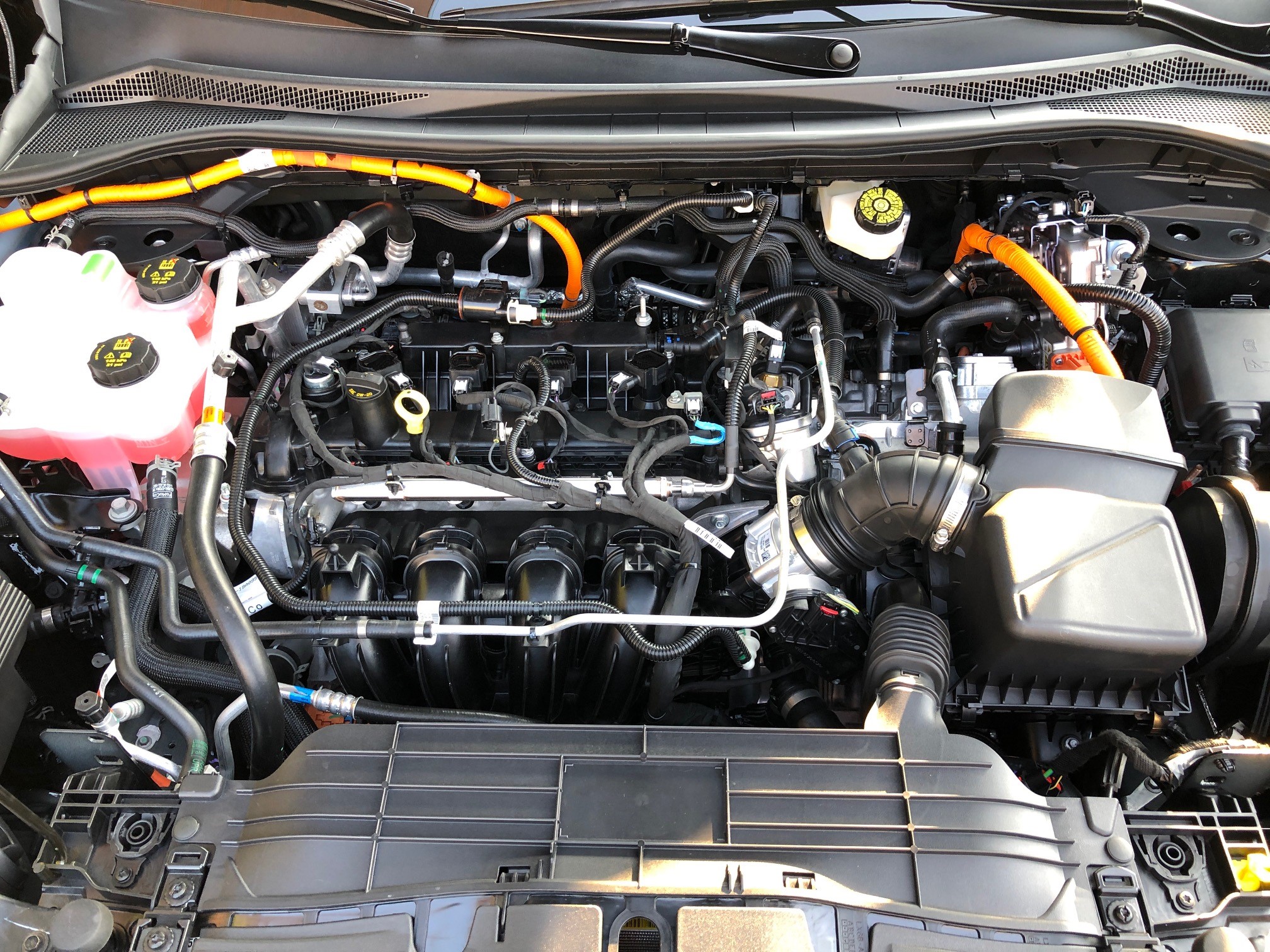 The Escape’s primary competition, Toyota’s RAV4 Hybrid, costs an extra $800 over the gas-only model and is rated at 39 mpg combined.

Driving the wheels via what Ford calls its PowerSplit electronic continuously variable transmission, the hybrid provides ample power while minimizing the rubbery reaction where engine speed seems to race beyond the normal rpm one might expect to achieve acceleration.

Credit the three-mode layout of the e-CVT developed by Ford’s powertrain engineers that combines engine, motor and regenerative power from the wheels to determine engine and motor output based on driver demand.

We drove the all-wheel-drive hybrid extensively through the curving, hilly roads here in Kentucky near where the vehicle is assembled, mostly operating in the highest-regenerative “L” (Low) transmission mode. The powertrain proved reasonably responsive and especially smooth and capable of moderating speed under throttle lift, encouraging one-pedal driving as it pares off velocity in a pleasing manner and without any sudden, unexpected responses.

The Escape offers five drive modes: Normal, Eco, Sport, Slippery and Snow/Sand, each affecting transmission, engine and steering response. Steering effort increases in Sport mode, but not quite as much as we’d prefer to match the vehicle’s excellent handling.

A 200-lb. (91-kg) weight reduction in the new C2 architecture improves fuel economy across all models through the use of aluminum for the hood, spare-tire wheel and suspension lower control arms. Use of high-strength steel in key areas such as the A-pillars and around the door frame cuts weight and allows for significantly slimmer front pillars, aiding visibility.

Reducing interior noise also is a focus with a new isolated rear subframe, fully shielded underbody, improved aerodynamics and laminated windshield and front side glass aiding the effort. Ford says minimizing sound bouncing off solid seat covers led to a decision to use less-reflective perforated leather in the Escape.

Overall, the Escape interior is roomy and nicely appointed, with faux-open-pore wood pieces on upper trim models that actually feels grainy to the touch. Ford touts increased cargo room to 37.5 cu. ft. (1,062 L), enough to accommodate four sets of golf clubs, and a sliding second row that offers up to 6.0 ins. (15.2 cm) of added legroom. Packaging of the hybrid powertrains and batteries is designed to eliminate cabin intrusion. 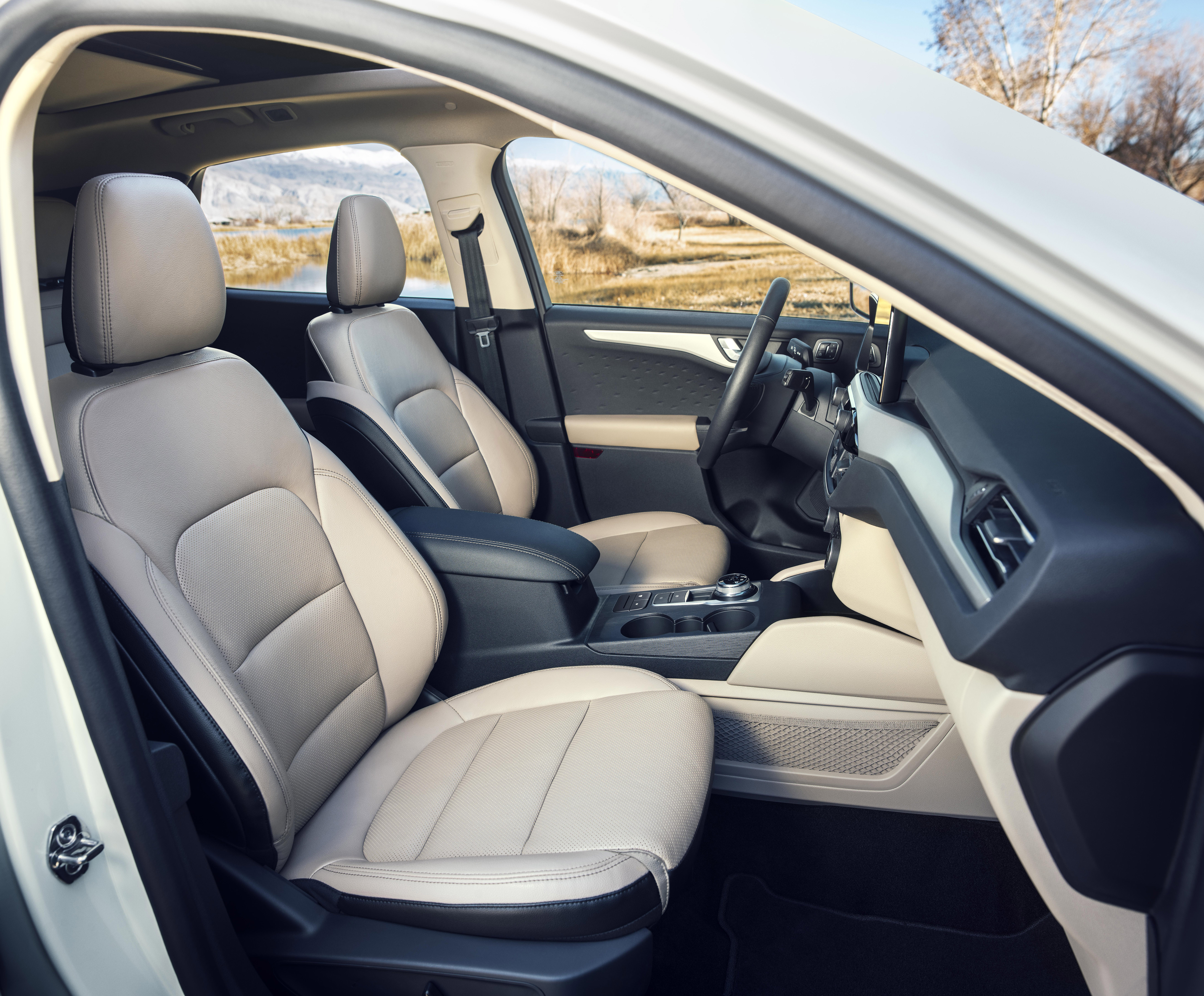 We sampled all of the Escape’s UX features, including superb phone pairing and excellent mapping on its 8.0-in. (20.3-cm) center touchscreen (standard on all but the base model). The wide 12.3-in. (31.2-cm) reconfigurable instrument cluster provides ample information in a clear format, while the head-up display’s small pop-up plastic display panel is functional but falls short of today’s standards.

Both the adaptive-cruise and lane-centering functions proved highly capable during our test drives, bringing the vehicle calmly and safely to a stop and resuming adequately if traffic ahead proceeded within a few seconds. The lane-centering function also kept the Escape between the lines even on long curves with little or no driver intervention.

Ford estimates about a quarter of Escape buyers will opt for the new hybrids, another quarter for the 2.0L and 50% going for the thrifty-priced 1.5L version.

Ford has sold some 6 million Escapes globally and 4.2 million in the U.S. since introducing it in 2000 as a ’01 model. But sales have slipped 6.0% this year, according to Wards Intelligence data, with Escape ranking fifth among Middle CUV segment competitors led by the RAV4 and including the Honda CR-V, Chevrolet Equinox and Nissan Rogue. In 2018, Ford sold 272,228 Escapes in a segment that accounted for 3.7 million sales. 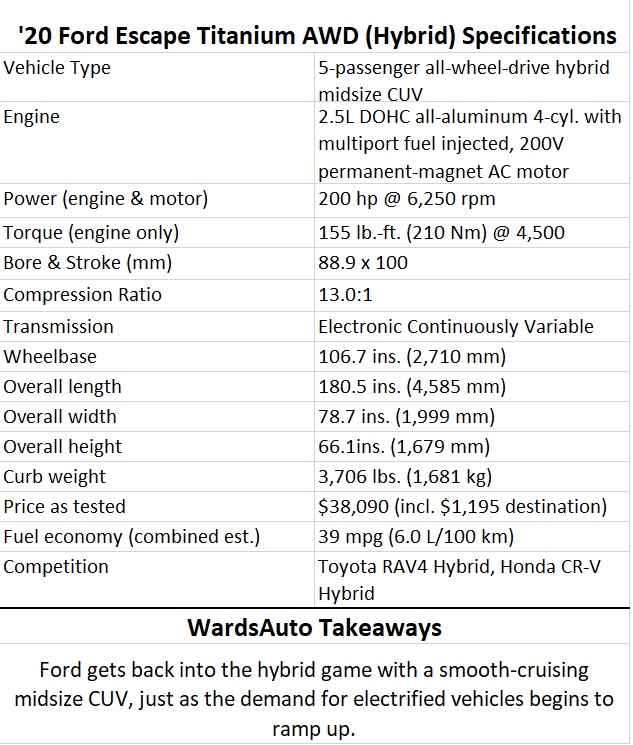