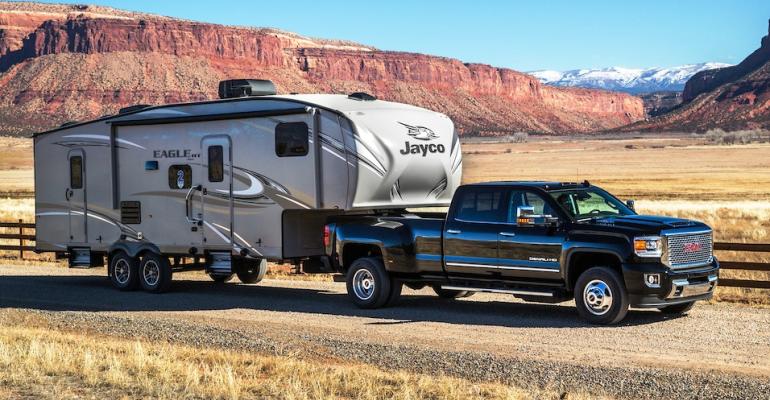 These are the diesel engine names that resonate with customers shopping for heavy-duty pickups from General Motors, Ford and Fiat Chrysler (Ram), respectively, for towing goods that invariably are several times more valuable than the vehicles themselves. We’re talking luxurious travel trailers, thoroughbred horses, racecars and speed boats.

Which stump-pulling turbodiesel is the best? The most trouble-free? The smoothest long-haul cruiser? The quietest? The most capable at towing? Ask these questions in a room full of heavy-duty truck owners and the matter might have to be settled outside.

GM’s 6.6L Duramax V-8 is the new kid on the block, having been fully redesigned for ’17 heavy-duty Chevrolet Silverado and GMC Sierra pickups that went on sale in December.

This re-engineered pushrod powerplant (codename L5P) makes a compelling case for overall segment supremacy by being whisper-quiet and nearly vibration-free at idle and steady-state cruising. It tows big loads with aplomb, even on treacherously steep, narrow winding roads past spectacular rock formations here that make it awfully difficult for drivers to keep eyes pointed strictly at the road.

How hushed is the new Duramax? GM engineers will say it’s nearly 2 dBA quieter than the engine (codename LML) it replaces. But it might be more meaningful to say the climate-control fans in the well-appointed hotel rooms hosting the media drive were significantly louder than the new Duramax, especially when the truck isn’t towing or hauling a massive load.

Take the Sierra Denali HD, with its monumental 910 lb.-ft. (1,234 Nm) of torque, up to 75 mph (121 km/h) on the highway, then let off slightly on the throttle when the truck begins a gentle downhill grade. No fooling, it’s about as quiet as a Nissan Leaf.

Hitch a properly stout trailer to the back end, weighing 10,000 lbs. (4,536 kg) and packed with a GMC Canyon pickup truck, and witness the L5P Duramax earning its stripes. Finally, the distinctive diesel clatter that has been the sound signature of compression-ignition engines over the ages becomes apparent as the duty cycle demands more air and fuel and more work from the 32-port valvetrain.

“Clatter” could be construed as negative, but not in the Sierra Denali HD. In heavy-duty trucks of old, the sound was constant, loud and annoying, attempting to rattle loose one’s dental work even at idle. The new Duramax, built in Moraine, OH, does a great job masking that unpleasantness; the combustion “dieselness” comes on like an old friend who is warmly greeted upon arrival but doesn’t overstay his welcome.

GM’s fullsize HD pickups were new two years ago, and the automaker focused intently on loading up the engine bay and cabin with sound-damping material at that time. Those efforts were stepped up modestly in the ’17 trucks, while most of the engineering attention was directed at improving the engine.

The L5P Duramax redesign was extensive, resulting in 90% of parts being all-new, including the crankshaft, connecting rods, pistons, exhaust aftertreatment system, cast-iron block and aluminum heads. The torque converter was upgraded to handle the additional power.

The structural upgrades helped boost in-cylinder pressure 20% to 2,611 psi (180 bar). Key goals of the engine program were to accommodate more air, resulting in a higher maximum boost pressure (32 psi [2.2 bar] up from 31 psi [2.1 bar]), and the ability to accommodate higher exhaust temperatures.

The powertrain team wanted (and achieved) more power (up 12%) and torque (up 19%) and to enable more engine braking to prevent excessive wear on brakes.

Helping on all these fronts was a redesigned camshaft profile, all-new BorgWarner turbocharger and more-robust Inconel gaskets. The Allison A1000 6-speed automatic transmission has been improved as well.

Another important piece is the all-new high-pressure common-rail fuel injection system, which sprays fuel directly into each cylinder with the force of 29,007 psi (2,000 bar).

Bosch had supplied the sophisticated piezo-electronic fuel injectors previously (also capable of 29,007 psi), but the automaker switched for the new Duramax program to Denso, which achieved program goals with less-expensive solenoid-based injectors.

Not many pickup trucks have hood scoops, but GM’s new heavies, built in Flint, MI, have one that is fully functional (and barely noticeable), allowing more air into the engine and helping with cooling. GM has a patent pending for the new induction system.

That scoop sure comes in handy when it’s time to pass a poky driver on a 2-lane road, going uphill. With the accelerator mashed, the Sierra Denali HD 2500, weighing in at 6,532 lbs. (2,963 kg), springs to life and darts easily around Gomer.

In this situation, it’s evident how the diesel barely seems to break a sweat, launching the behemoth to 85 mph (137 km/h) while spinning at a mere 2,500 rpm. Most gasoline engines will need twice the revs to get the same job done.

Although the numbers barely have changed, the powertrain team is convinced customers will discover the new L5P tows big loads with a lot more confidence while being more efficient as well. Trucks this big do not carry EPA fuel-economy ratings, but suffice to say mileage numbers in the single digits have been common over the years, when towing.

So imagine our surprise when our first 84-mile (135-km) leg in a 4-wheel-drive Crew Cab on undulating roads from here to Colorado delivered a somewhat shocking 18.4 mpg (12.7 L/100 km). Granted, there was no cargo in the bed or trailer on the hitch, but there were three adults inside.

Kudos to any automaker striving for better real-world fuel economy in this segment, especially because heavy-duty trucks such as these with gross vehicle weight exceeding 8,000 lbs. (3,629 kg) are exempt from CAFE regulation.

For years, the fierce competition in this “mine is bigger than yours” sector demanded the highest possible torque rating each time an engine was re-engineered. A decade ago, it was a big deal when these workhorses broached the torque threshold of 600 lb.-ft. (813 Nm), which seems paltry now.

But times have changed, and GM seems perfectly content to let Ford’s Power Stroke 6.7L V-8 in the Super Duty pickups hoist the torque crown with a staggering 925 lb.-ft. (1,254 Nm). Instead, GM’s engineering team is proud of the new urea injection system contributing to a 35% reduction in emissions, particularly nitrogen oxides and nonmethane hydrocarbons.

These trucks are not cheap. Yes, the base price with a gasoline V-8 is $35,085, but most customers want the Duramax diesel, which is package-priced at $9,550.  About 25% of all GMC Sierra pickups are heavy-duty, and the average transaction price is about $54,000.

There seems to be no shortage of well-heeled customers willing to spend $60,000 or more on the most capable diesels, and GM marketers say growth in the heavy-duty sector is outpacing that of the more-popular light-duty trucks.

Automakers would be crazy not to exploit this segment for all they can, as long as they can.