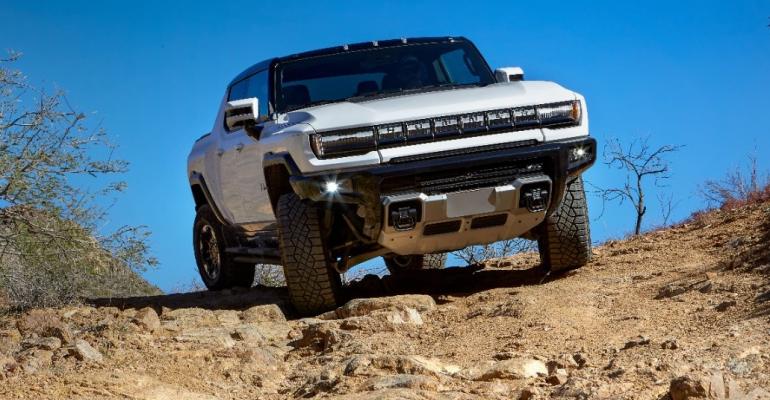 GMC’s Hummer EV puts the exclamation point on electric vehicles, allowing General Motors to start at the top of the mountain with a maximum Ultium-powered vehicle that will the pave the way to affordable, everyday BEVs powered by the same, scalable system.

SCOTTSDALE, AZ – We’ve seen the pictures, watched the videos, read the early reports. But having now driven the GMC Hummer EV pickup from dragstrip to deep off-road trails, with some hands-free highway miles in between, it’s safe to say General Motors’ first offering from its Ultium platform is nothing short of a mechanical marvel.

Yes, it’s a behemoth, weighing in at a reported 9,063 lbs. (4,111 kg), well beyond any light-duty vehicle. Yes, a battery-electric vehicle carrying the Hummer brand may seem the antithesis of anything environmentally friendly. And yes, very few people really need or can afford a BEV that stickers in the six figures.

All that said, GM’s latest approach to the BEV market may make the most sense compared with earlier swings and misses (or near misses). The Detroit automaker has a long and checkered history in electrification, with the life – and what critics have argued was the untimely death – of the EV1 BEV. The subsequent Chevrolet Volt/Cadillac ELR extended-range hybrids are more examples of programs that produced great vehicles but may have been scrapped before their expiration dates.

So far, the Chevy Bolt EV and Bolt EUV live on, but on borrowed time until expansion of the Ultium platform makes their architecture outdated. 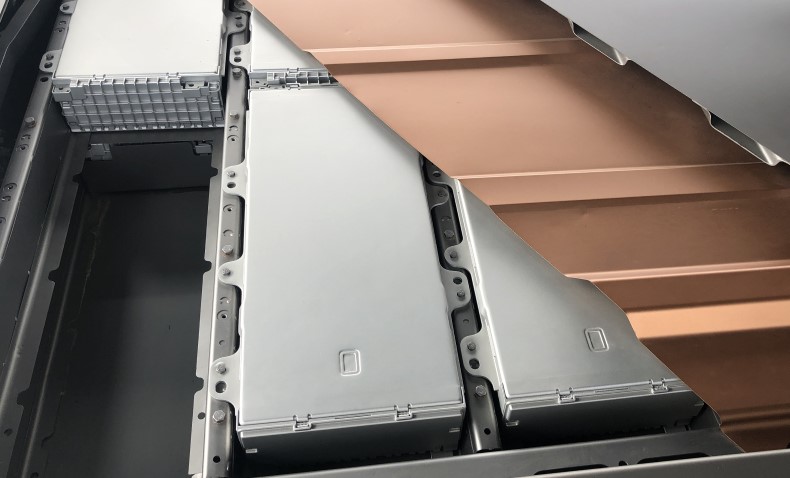 So why does a Hummer EV makes sense? Here’s how: BEVs are prohibitively expensive, and they’re going to stay that way until the cost of batteries comes down enough to make electric powertrains competitive with internal-combustion power. Even with government incentives, which in their current form are rapidly going away as each automaker surpasses EV sales limits built into those programs, sticker prices remain high.

So why not accept the inevitable: that BEVs can be pricey, and build one that comes with every imaginable capability and a sticker price to support it?

GMC spokesman Chad Lyons says the six-figure Hummer EV is the tip of the spear in the introduction of GM’s Ultium architecture that includes battery and motor technologies that will underpin a bevy of EVs within GM’s portfolio, covering vehicles with a wide range of sizes and segments.

“GM was purposeful in establishing a halo strategy with a vehicle like the GMC Hummer EV first so as to showcase and set the stage for what Ultium can do,” Lyons explains.

“This trickle-down strategy is the right approach to build credibility and prove the capability surrounding Ultium and the vehicles it’ll underpin. For instance, customers will understand and appreciate that the battery chemistry in a supertruck like the Hummer EV is the exact same battery chemistry being utilized in a vehicle like the Chevrolet Equinox EV.”

Lyons adds the landscape for electric vehicles has changed dramatically since the first Volt arrived in 2010. Charging infrastructure has expanded and improved with fast-charging capabilities, and EV costs are down. Some 70% of Hummer EV intenders are new to EVs, he says.

“High-priced EVs when the Chevrolet Volt first launched would probably not have been well received,” Lyons tells Wards. “Now is the time, however, for a strategy like GM has selected, with astonishing vehicles at the pinnacle of our innovation offering, leading the way and setting the pace for the significant EV transformation GM is about to embark upon.”

We expected the Hummer EV to excel off-road, building on the legacy of the brand’s formerly gas-powered behemoths that were able to crawl and climb over nearly any obstacle. But we didn’t anticipate how capable the same machine would be in on-road and on-track driving.

On-track, in a Hummer? GMC set up a straight-line dragstrip to show off the Hummer EV’s Watts to Freedom zero-to-insane velocity prowess, and it’s hard to really describe the rush of acceleration that occurs when the vehicle launches. All four tires paw for traction in a way that sounds as if the pavement is being shredded underfoot and the machine blindingly blasts to 60 mph (97 km/h) in 3 seconds and past any legal limit a heartbeat or two after that.

The sheer mass and upright stance of the Hummer EV brings to mind the kind of quickness we’ve experienced in the bank-vault Mercedes-Benz G63 AMG or the Ford F-150 Lightning (the supercharged V-8 version of old, not the electric pickup. More to come on that one). We’re not sure where and when the owner might show this off to his friends, but hey, “FREEDOM!”

Out on the highway running to an off-roading area, the Hummer EV runs stunningly silent and steady despite its giant 35-in. Goodyear Wrangler Territory rubber. The vehicle features the latest version of hands-free Super Cruise, allowing automatic lane changes with a flick of the turn-signal stalk when conditions permit. In our tests, this version of Super Cruise proves slick and capable. 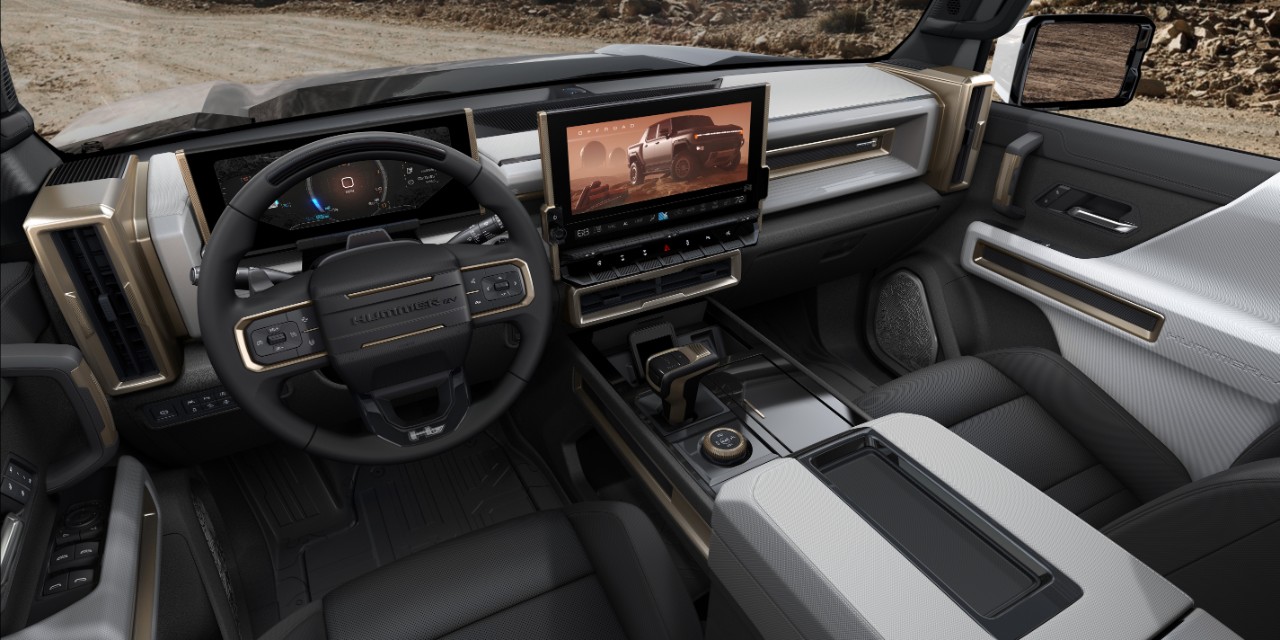 Of course, off-road is where the predecessor Hummer made its reputation and the electric version carries on that tradition, with some unique twists. Literally. There is nothing quite like driving a vehicle with these dimensions, using its low-speed, out-of-phase 4 Wheel Steer, to deftly dance around boulders and other obstructions.

It can feel unnerving at first, as though the chassis and body have become disconnected, but you get used to it. And that’s before you switch into CrabWalk, which turns the rear wheels up to 10 degrees, in phase with the fronts, to allow the vehicle to pivot sideways with surprising dexterity.

Though relatively rugged, the trails we toured here rarely tested the Hummer EV’s capabilities; once or twice we switched on the front e-locker just to get a little more traction on some loose gravel on sharp uphill grades.

That level of quick charging could come in handy, considering on our test drive the vehicle consumed 1 kWh of power for every 1.6 miles (2.6 km) travelled, putting it at the low end of the miles/kWh scale. Most BEVs we’ve tested manage about 3 miles (4.8 km) per kWh.

With a 329-mile (529-km) range, drawing on a 400V, 24-module battery pack sending juice to three motors (single in front, dual-motor rear) producing a combined 1,000 hp and 1,200 lb.-ft. (1,627 Nm) of torque, the Hummer EV certainly carries on the brand’s legacy of being the biggest, baddest off-roader. But with zero emissions and silent running, is the Hummer EV (along with some electrified Jeep offerings) rewriting the rules of off-roading?

Says GMC’s Lyons: “No zero-emissions vehicle should be thought of to be at odds with ‘environmental statements.’” 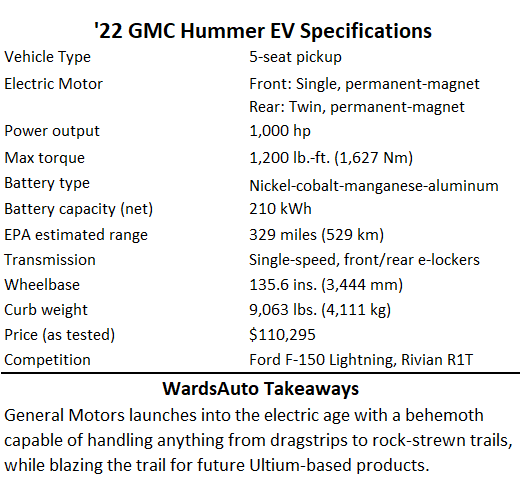