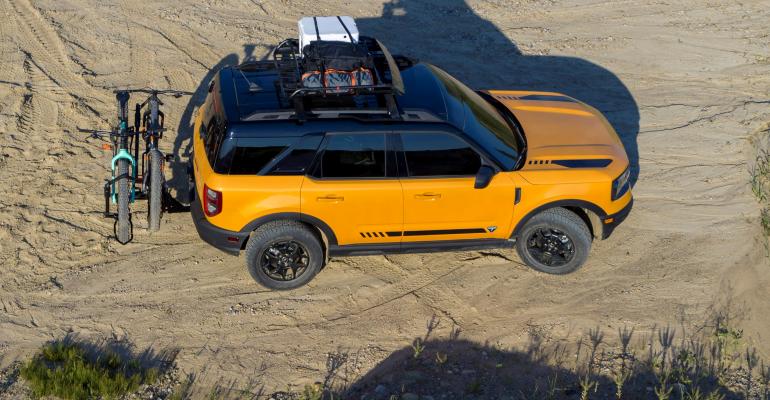 With the 2021 Bronco Sport, Ford engineers have transformed a humble grocery getter (the Ford Escape) into a rut-traversing, stream-fording, hill-climbing badass. It goes on sale this month in the U.S.

HOLLY, MI – When Ford announced it was releasing a Bronco Sport in addition to the regular all-new Bronco coming later, eyebrows were raised.

Some questioned if the Sport was going to be a fashion statement, worthy of being called an off-roader in the Bronco tradition. After spending an afternoon crawling around inside its cabin, as well as making it crawl up and down rough terrain in a one-hour intense off-roading session, we can say, “yes and yes.”

Ford engineers impressively have transformed a humble grocery getter (the Bronco Sport is based on the current Ford Escape platform) into a rut-traversing, stream-fording, hill-climbing badass.

Each of the five grades of the Bronco Sport – base, Big Bend, Outer Banks, Badlands and the limited-number First Edition – have all-wheel drive.

The advanced “4x4 system” (not truly 4x4 as this is a unibody vehicle) on the Badlands and First Edition grades has a twin-clutch rear-drive unit, with a differential locking feature – similar to a mechanical locking rear differential – that can send nearly all rear axle toque to either wheel. 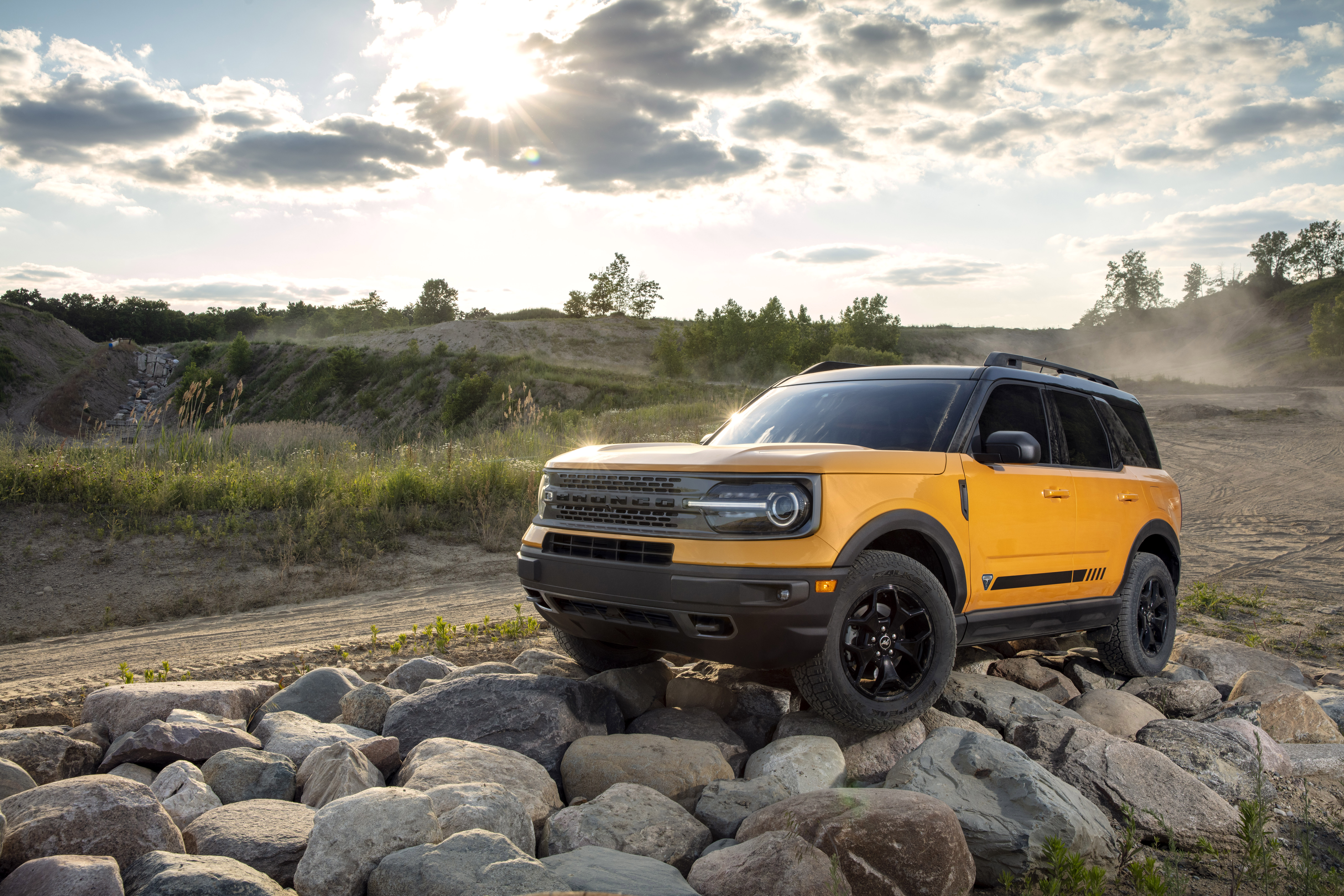 We put an Outer Banks grade – expected to be the most popular trim level among buyers – to the test at the Holly Oaks Off-Road Vehicle park, site of a former sand and gravel pit, north of Detroit.

The ORV park (pictured below) is famed for its “mild to wild” adventure areas – including a Moab-simulating Mount Magna area – designed with input from longtime off-road enthusiasts. 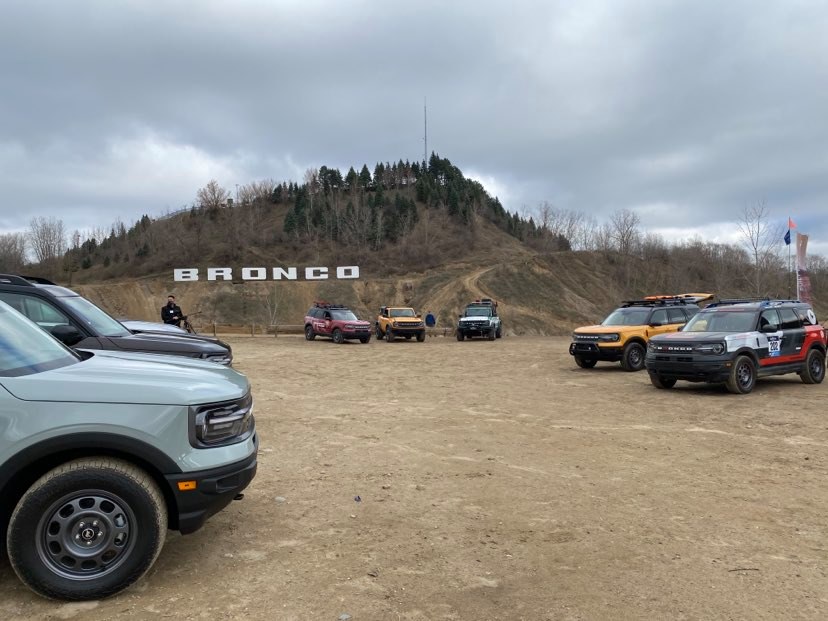 Over boulders, up and down rutted steep hills and through a moderate stream (the Outer Banks grade has 17.7 ins. [45 cm] of water fording depth compared with 23.6 ins. [60 cm] for the Bad Lands and First Edition grades), our Bronco Sport tackles just about every challenge with ease.

The exception is a sandy incline, made wet by a recent rain. It took a few tries to get up and over, but the third time was the charm, with more speed.

The Bronco Sport has two of the new Escape’s three engines: Ford’s 1.5L EcoBoost 3-cyl., with an estimated 181 hp and 190 lb.-ft. (257 Nm) of torque. This is standard in the base, Big Bend and Outer Banks grades and we enjoy its low torque peak (3,000 rpm), helpful during an on-road passing maneuver and during the off-road hill climbs.

On-road engine noise is minimal. The ride is mostly comfortable, although mildly rough on some roads in northern Oakland and southern Genesee counties with older, broken-up pavement.

We use Eco GOAT mode the most on-road, firming up the accelerator to suppress lead feet and resulting in fantastic overall fuel economy of 34.3 mpg (6.8 L/100 km – highest observed 36.5 mpg [6.4 L/100 km]). On a deserted gravel road, we gun it in Sport mode and there’s no fishtailing or noticeable loss of traction.

The Bronco Sport’s boxy shape is a nod to both SUVs of yesteryear as well as more recent reboots of retro SUVs, such as Toyota’s FJ Cruiser and the Land Rover Defender.

Like those models it uses dark plastic cladding to contrast with painted sheet metal. The flat hood, upright A-pillar and D-pillar and vertical grille seal the Bronco Sport’s upright, squarish stance in distinguishing it from the ubiquitous Escape.

The interior’s a corresponding feast for the eyes, with clean, subtle style thanks to muted colors and unique shapes and textures.

The Outer Banks grade we drive 55 miles (89-km) on-road has a dark gray-blue interior, with a gray fleece-like fabric paired with a slate-blue leather on seats, an embossed image of a bucking bronco atop front seats and a plethora of thoughtfully textured and patterned surfaces – including inside bins and the zip-up seat pockets on the back of front seats.

Front seats are roomy, while rear seat legroom can be tight depending on how the front seat is positioned. The raised elevation of the backseat allows passengers a good outward view.

The infotainment system is near perfect. Our voice commands, despite being wrong in structure per on-screen suggestions, nevertheless are understood, and quickly too. Requests to change stations and find various stores and restaurants result in lightning-fast and accurate responses.

Both the gauge cluster screen and main touchscreen are bright with high resolution. We appreciate how obvious Ford made icons to indicate when certain ADAS technology is in use, specifically adaptive cruise control and the speed at which it is set.

As in other newer Fords, much of the ADAS technology on board our Bronco Sport can be fine-tuned in the settings menu, with increased or decreased sensitivity and the elimination or addition of various warnings.

But no USB ports on the back of the center console mean rear passengers wishing to charge devices will need to snake cords out of the center box. There is a second-row 110V AC outlet though.

The cargo area has a 12V outlet, as well as a 110V outlet in Badlands grades, for powering various camping gear.

The lack of rear USB ports, plus a weird experience where we can’t change a radio station via buttons, even after an engine shutdown and restart, keeps us from granting a full A grade to the Bronco Sport’s infotainment system.

We spend about 50% of our on-road route testing the ADAS technologies, discovering that, like most in market today, they’re far from perfect.

ACC’s ability to detect traffic ahead is good, but lane-line detection is spotty, even on roads with fresh-looking solid paint, which we presume is due to bright sunlight and/or dirt picked up on gravel roads impacting cameras and radar.

Lane centering gives us the most to grumble about, sometimes jerking the wheel strongly to pull us closer to a lane line than we want to be.

There’s plenty of utility in this utility vehicle for off-roading, camping, kayaking or biking gear, with sewn straps on seatbacks able to store various gear, such as flashlights and carabiners; rear flood lights to illuminate dark camp sites; flip-up rear glass; and a steel roof/roof rack able to handle a 150-lb. (68-kg) load in motion or a 600-lb. (272-kg) load when parked. Aftermarket accessories for the Bronco Sport include a roof-mounted tent and rubberized cargo and seatback pads. 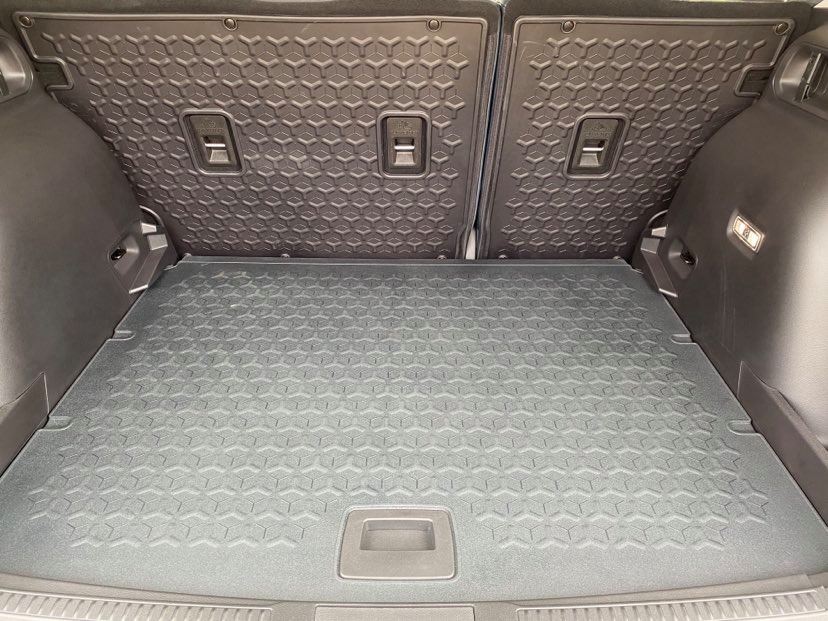 Given that there’s nothing quite like it in the Middle CUV segment – Honda’s Passport, Subaru’s Forester and Outback and select grades of the Jeep Cherokee and Toyota RAV4 have off-road prowess but stylistically are weak – we think the Bronco Sport will sell well.

A plethora of features to please the serious off-roader, plus the comfort, style, technology and convenience for on-road driving, make this new CUV the total package. 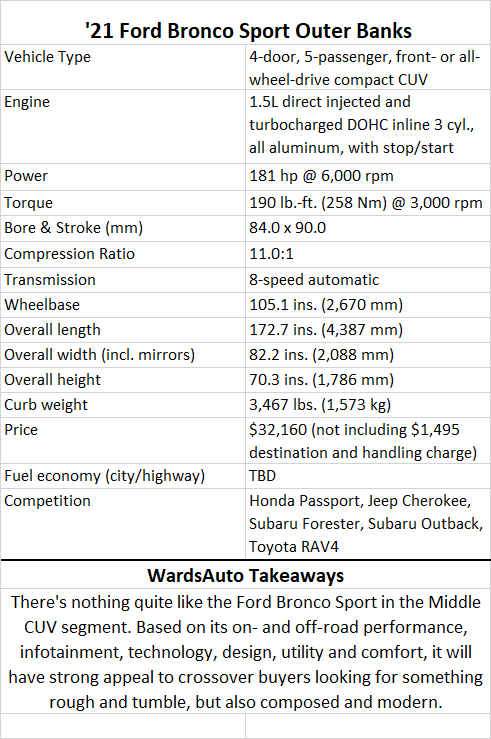