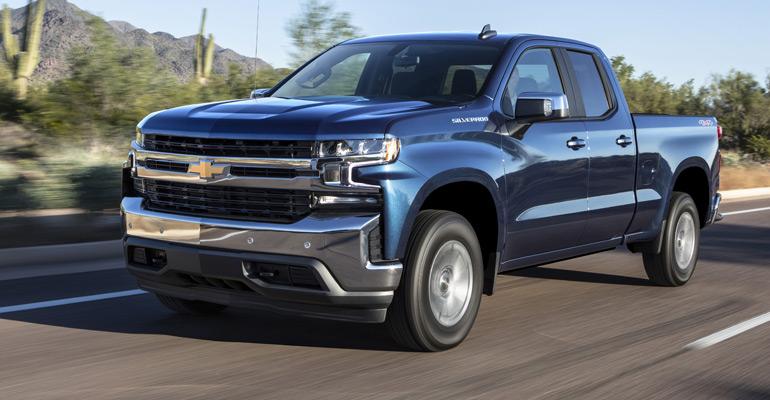 TONTO NATIONAL FOREST, AZ – If a speck of doubt remains over the dominance downsized boosted engines will enjoy within the industry going forward, the ’19 Chevrolet Silverado with its 2.7L turbocharged 4-cyl. washes it away with a firehose.

The all-new, gasoline inline-4 from GM Propulsion arriving at Chevy dealers is standard equipment on Silverado LT and RST trim levels. It was developed specifically for truck applications and replaces the 4.3L naturally aspirated, small-block V-6 that bowed with the previous-generation Silverado. The GMC Sierra large pickup also receives the engine.

However, “replace” diminishes the technological chasm between the two engines. In baseball terms, the 4-banger would be Mike Trout stepping in for a Thursday night beer leaguer. Not to bash the 4.3L V-6 too harshly, it fit the bill as a sound utility player with good towing capability for five model years. But the game, as they say, has moved on and it was time the 4.3L did so too.

The argument for downsizing and boosting is easy: Smaller-displacement engines outfitted with turbochargers can improve fuel economy without sacrificing power.

That means despite shouldering some 4,700 lbs. (2,132 kg) of pickup, the engine provides excellent acceleration merging a 2-wheel-drive Silverado RST crew cab into traffic along Phoenix freeways or overtaking slower traffic in the desert foothills here. The torquey-ness also means owners pulling light loads, such as a pair of jet skis or dirt bikes, can leave the stoplight cleanly and still get good fuel economy unladen. 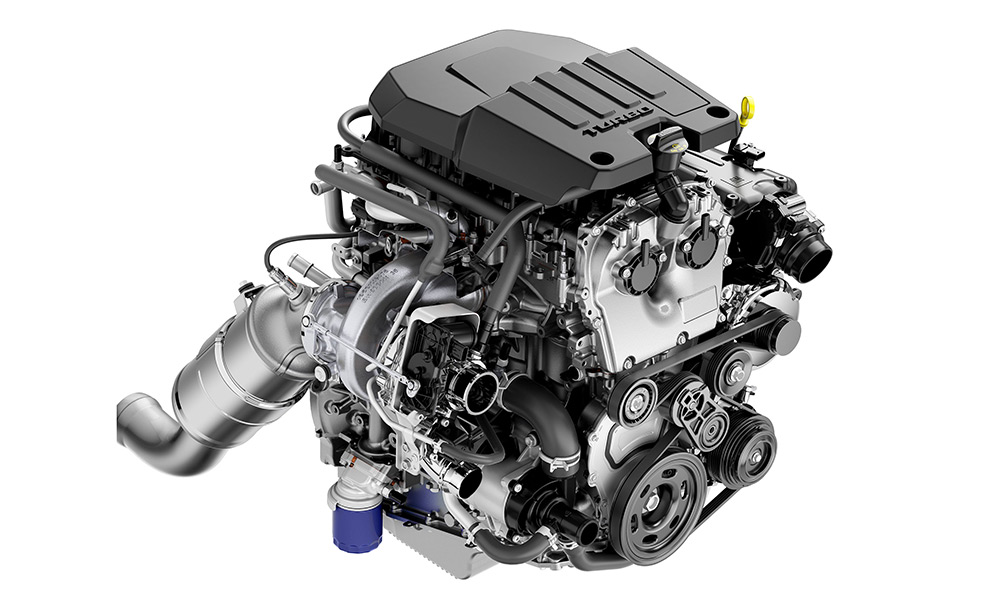 Credit a BorgWarner-sourced turbocharger, which leverages a unique dual-volute design. Exhaust gases enter through two ports, pushing hard on the turbine to spin it up quickly and diminish turbo lag. An integrated exhaust manifold, which is part of the cylinder-head assembly, also reduces turbo lag.

Linked to an 8-speed automatic transmission, GM says the Silverado 4-cyl. sprints to 60 mph (97 km/h) in less than 7 seconds. An aluminum block and head reduce weight and mass.

As effectively as the engine performed during testing, there are a few caveats to note. For starters, 2.7L is a larger 4-cyl., and a house cat probably could squeeze into the turbo chamber it is so large. This is not the pint-size 2.0L, or even 1.5L, turbos overflowing the market today in cars and crossovers.

But as a bigger 4-cyl., it also is more refined than its smaller, oftentimes buzzier brethren. At the same time, hard throttle does not return the familiar sound of a V-8 or big V-6 most of us are accustomed to in large pickups. There is a noticeable lack of turbo whine and while fuel-saving stop-start technology comes on and off smoothly enough, GM has put forth more seamless systems.

On top of turbocharging, the DOHC engine draws efficiency from other new technologies. It is the first time a Chevy employs cylinder deactivation. Under light load, two of the cylinders shut down.

The engine also uses a sophisticated cam-phasing technology, where it operates in high- and low-lift valve profiles. The greater range of valve lift, in short, permits a greater range of performance and efficiency. Valve timing is continuously variable, too, so it can be optimized to any engine speed for greater efficiency.

A technology GM calls Active Thermal Management uses targeted engine heating and cooling to improve engine performance according to the ambient temperature, and it can raise the comfort quotient by heating the cabin more quickly. An electric water pump replaces a traditional engine-driven unit, which also improves efficiency and keeps the cabin warm in cold weather when the engine’s stop-start system is engaged.

The result is an awfully high-tech 4-cyl. engine punching far above its weight but seemingly unfazed by the workout. Of course, the big question is how efficient it would be under load. A bugaboo of turbocharged pickups is once they get loaded up, the turbo works too often and fuel economy plummets.

That evaluation would have to be for another day, but as it stands the Silverado 4-cyl. is a no-sacrifice alternative to less-efficient 6-cyl. models on the market. 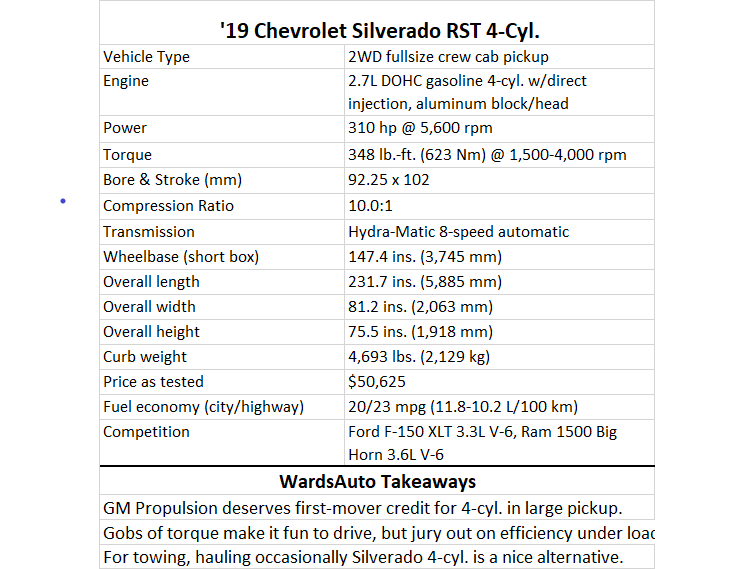