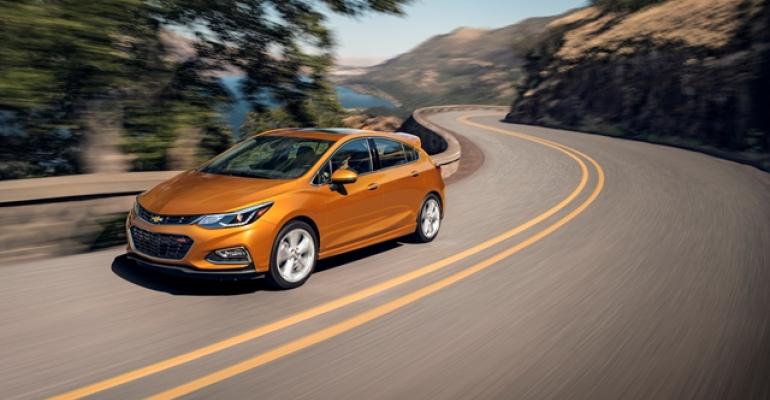 Form follows function, so the Cruze Hatch should appeal to buyers with active lifestyles. Folding the second-row seats opens up 47.2 cu.-ft. of cargo space.

DETROIT – Designers often say a hatchback finishes what a sedan starts. The adage could not be truer than with the new Chevrolet Cruze Hatch.

The ’17 Cruze hatchback arrives at U.S. dealers in the coming weeks on the heels of the sedan, which hit the market earlier this year with dramatic, flowing exterior lines and a swooping coupe-like profile.

The 5-door takes that contemporary look a step further, losing the rear decklid for a shorter, sportier-looking rear overhang. Clipping off the trunk also creates a profile suggesting a mass of tension, like an Olympic sprinter up in the starting blocks.

Wrap-around tail lamps and an integrated spoiler atop the lift gate punctuate its athletic look. Models with an RS appearance package, which adds items such as larger wheels, unique front and rear fascias and rocker panels, are especially fetching.

There is a price premium for the hatch of about $1,000 for well-appointed LT-trim base models with a 6-speed manual to $500 for up-level variants with a 6-speed automatic.

But form follows function, so the Cruze Hatch should appeal to buyers with active lifestyles. Folding the second-row seats opens up 47.2 cu.-ft. (1,336 L) of cargo space and a tunnel to chuck equipment inside quickly and easily.

If there is one complaint about hatchbacks it is noisiness, an idiosyncrasy created by the lack of a trunk. In the worst cases, front and rear passengers hardly can hear each other speak over amplified wind, road and tire noise in the open cabin. On extended road trips it can be fatiguing.

The Cruze Hatch is a veritable tomb by comparison. General Motors engineers added 10 extra pieces of insulation to the lower rear area of the car, while close-out plugs seal hookup points utilized during the assembly process. Alternative roof bows were used to further tamp down noise.

The attenuation also reduces unpleasant exhaust sounds, a side benefit that makes the car’s 1.4L turbocharged 4-cyl. sound more refined than in the Cruze sedan.

The remainder of the interior’s appointments carries over from the sedan. There is a lot of elbow room for a compact car and it will seat five adults, although, like its sedan sister, the Cruze Hatch lacks the safety of a headrest for center-rear seating position. The steering wheel is chunky, which marries nicely with the electronic system’s on-center feel.

Cloth door and dashboard inserts on LT models are a bit of a head-scratcher. They would seem to pick up dust and stains easily, but it is a bit of Euro flair some folks might find appealing. Our preference is for the leather inserts inside top-of-the-range Premier models.

The Cruze Hatch also receives a suite of excellent-performing connectivity items, including available OnStar, a 4G Wi-Fi hotspot and, as standard equipment, Apple CarPlay and Android Auto compatibility so owners can sync smartphones to the car wirelessly.

A ring of available advanced safety technology wraps passengers. There is lane-keep assist, rear cross-traffic and side blindspot alerts and rear-parking assist.

Unfortunately, as sporty as the Cruze Hatch appears it does not receive any performance upgrades from the sedan to set it apart mechanically. The 1.4L turbocharged gasoline 4-cyl. with direct injection is mated to a 6-speed automatic transmission. It is a satisfactory unit, but no stunner of a powertrain. The combination returned 31.3 mpg (7.5 L/100 km) after 90 minutes of mixed driving compared with an EPA-estimated 29/38 city-hwy (5.9-6.4 L/100 km) on the sticker.

The good news is GM soon will offer performance exhaust and air-intake upgrades from the factory, which can add upwards of 10 hp to the package. An all-new 1.6L 4-cyl. diesel, along with an available 9-speed automatic transmission, join the mix next year and should come with significant bump up in driver-pleasing torque.

Perhaps as importantly as anything, the Cruze Hatch should press the Chevy brand forward. The gold bowtie boasts a car lineup as technically competitive and fresh-looking as any in the U.S. but trails rivals Toyota, Honda and Nissan in market share, according to WardsAuto data. Ford is a close fifth behind Chevy.

But the hatchback segment, while still quite small in the U.S., is growing. The 5-door body style accounted for 10.6% of car sales in ’16, up from 7.5% in ’11. And contemporary C-segment hatchbacks typically appeal to a wealthier, trendier customer, which is exactly the kind of buyer Chevy needs to support its transformation from the market’s bargain nameplate to among its most desirable.