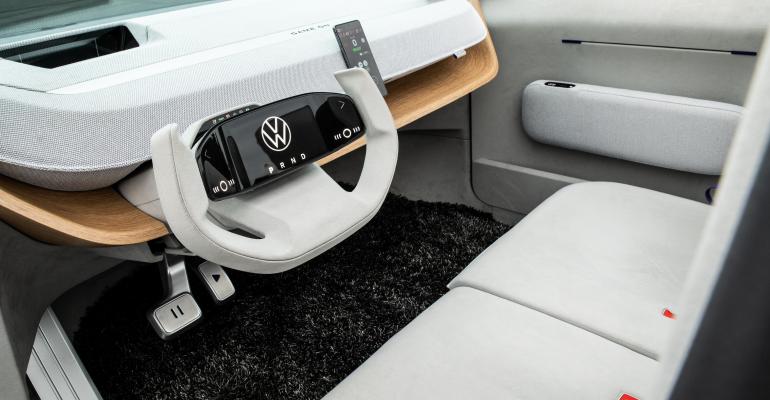 The electric-powered CUV points toward a future of modestly priced, zero-emission personal mobility in much the same way the original Beetle promised the world access to affordable combustion-engine motoring over eight decades ago.

It wasn’t an extensive drive. Time spent in multimillion-dollar concept cars is rarely anything but a fleeting experience in the best of times. But a handful of laps around Volkswagen’s Wolfsburg, Germany, test track was much more than we expected when we were invited to drive the ID. LIFE.

The electric-powered CUV points toward a future of modestly priced, zero-emission personal mobility in much the same way the original Beetle promised the world access to affordable combustion-engine motoring over eight decades ago.

There will be SEAT and Skoda sister models. In fact, moves are already under way to produce the new Volkswagen model at SEAT’s Martorell factory in Spain, which is being geared up for annual volumes of up to 500,000 BEVs on the back of generous European Union subsidies.

An original strategy called for the introduction of the new, price-leading Volkswagen electric model in 2027. But amid faster-than-expected acceptance of electric cars among private buyers, Volkswagen CEO Ralf Brandstätter moved the launch forward by two years.

The aim with the styling of the ID.LIFE was not simply to create a smaller ID.3 with some CUV- like touches. Rather, VW says it wanted to establish a more timeless lineage that could be carried through to the future production version without radical changes. As such, its design shares little with the automaker’s other electric-powered models, taking on a more-boxy profile meant to provide it with maximum versatility within relatively compact dimensions.

Previewing the engineering of the planned production version, the concept is based on a modified version of Volkswagen’s MEB platform boasting a 4-in. (100-mm) shorter wheelbase than that used by the ID.3 hatchback at 104 ins. (2,650 mm).

A 57-kWh battery, one of a number of different capacity units planned to be offered in the production version of the entry-level ID. model, is mounted within the floorpan, providing the interior with a flat floor. It uses a different chemical process than that of the ID.3 with lithium-ion phosphate (LFP) cells replacing the more cost-intensive Li-ion nickel-cobalt-manganese (NCM) formulation Volkswagen now uses.

In a further departure from the ID.3, the concept CUV’s electric motor is mounted low within the front axle and drives the front wheels via a fixed single-speed reduction gearbox instead of being sited on the rear axle and driving the rear wheels. It develops a claimed 231 hp and 214 lb.-ft. (290 Nm) of torque.

The production version is unlikely to offer such strong reserves, though Volkswagen is keen to display the potential of its latest electric model, suggesting a front-wheel-drive GTX performance model could be in the cards if a market for such a car develops. An all-wheel-drive option is not envisioned.

The decision to mount the motor within the front axle was made primarily on cost grounds. Additionally, there are packaging benefits, with the space at the rear set to be dedicated entirely to trunk space. There’s also a small frunk up front. 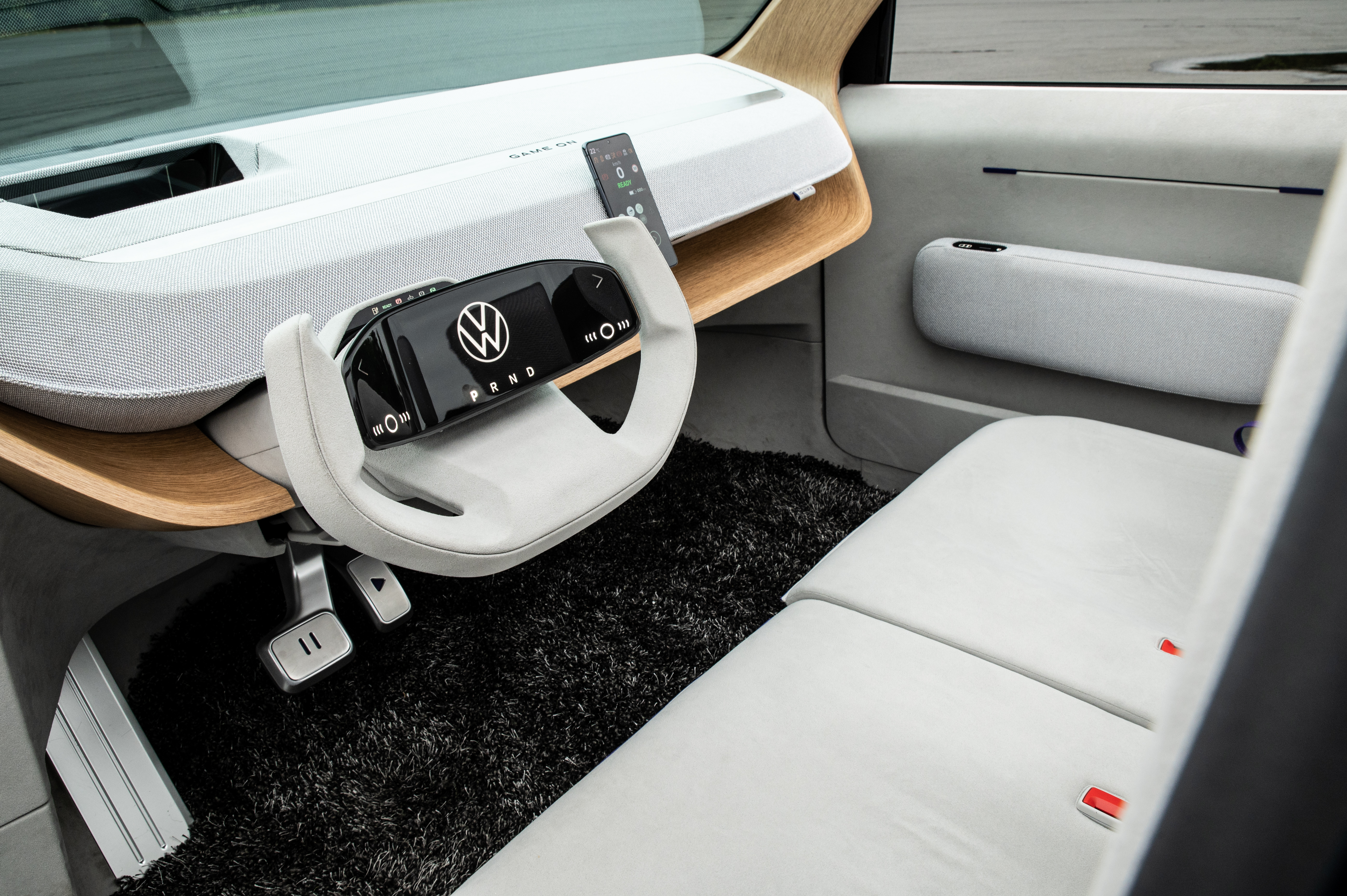 The design of the interior (pictured, above) mirrors the minimal look evident in the exterior. A digital instrument display is mounted within a yoke-style steering wheel, while the wooden dashboard is upholstered in a recycled polyester material and trimmed with brushed aluminum.

There is no dedicated infotainment display. Volkswagen proposes you use a smartphone instead.

There’s also a built-in projector with a screen that extends from the roof, allowing you to view video when the new Volkswagen is stationary. The lounge effect is further enhanced by bench-style seats both front and rear. This enables a range of different possibilities, from cinema seating to a bed.

A starter button is etched into wood of the dashboard, while the gear selector is incorporated as a permanent readout within the steering wheel-mounted display (pictured, below) along with the indicators, doing away with the need for column stalks. 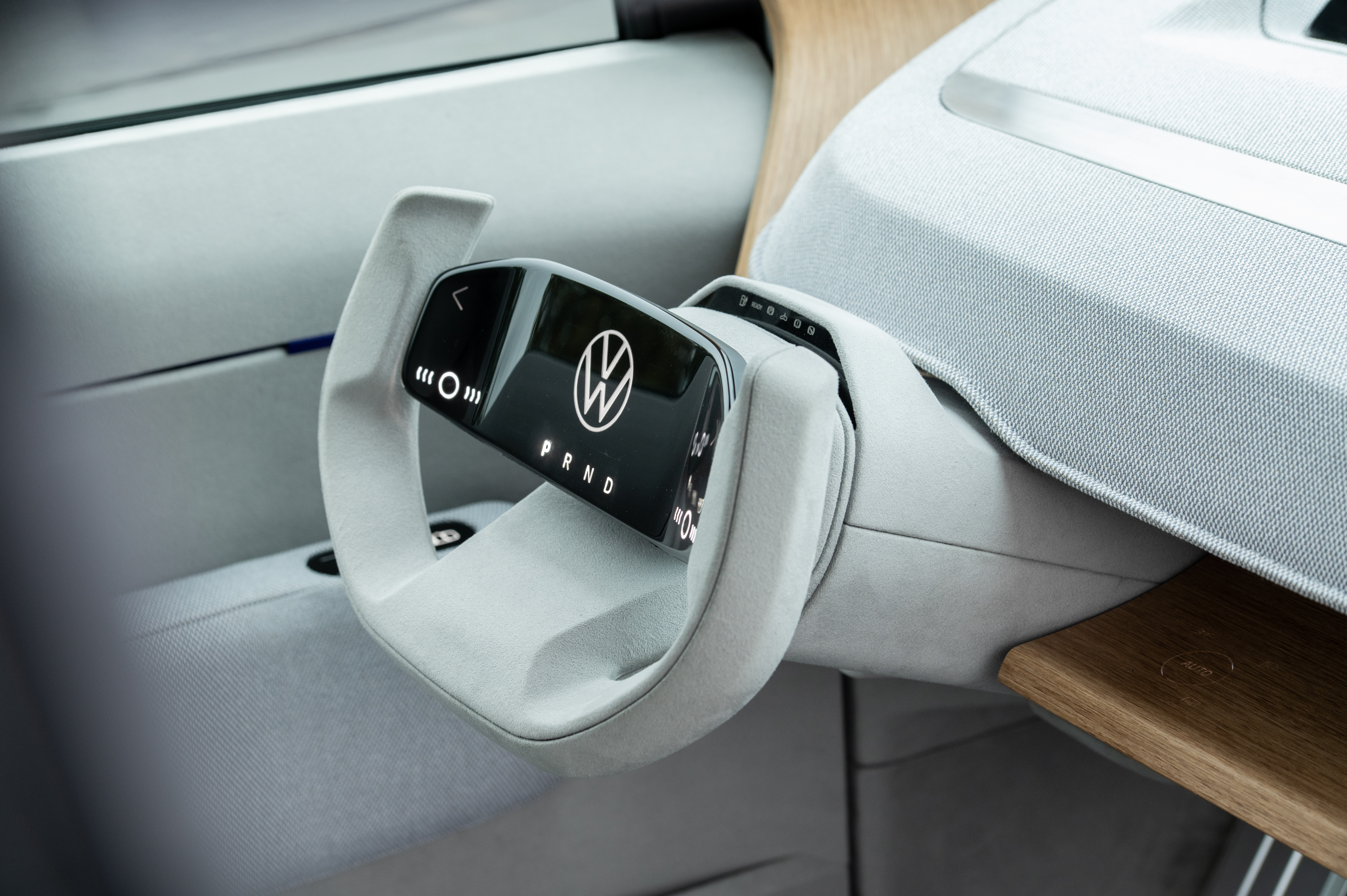 After getting comfortable, we press “D” to get under way.

The raised seating gives you a pretty good idea of how the production version of the ID.LIFE might feel from the driver’s seat, providing good visibility to each corner. However, there’s predictably little about the driving experience to tell you what it will be like on the road.

The one-off crossover has been constructed as a proof of concept. It is meant to demonstrate what is feasible in terms of design and packaging. Right now, it lacks the engineering integrity to tackle the more demanding sections of Volkswagen’s test track with any great vigor.

That said, the junior ID. model is much better to drive than many concept cars we’ve come across over the years.

This can partly be attributed to the fact that it is already based on an early version of the production car’s platform, rather than one cobbled together from an existing combustion-engine Volkswagen structure, giving it a good degree of structural rigidity.

The shortened MEB structure supports a MacPherson strut front and torsion beam rear suspension. As with the electromechanical steering system, it is sourced from the ID.3 hatchback. The 20-in. wheels wear 235/45 profile Continental Eco Contact tires.

It is quite responsive off the line. However, the subsequent acceleration reveals little of the potential promised by the official performance claims. That is because Volkswagen has limited the top speed to just 18 mph (29 km/h). When we reach it, there is a strong whine from the front-mounted electric motor and a noticeable amount of wind buffeting where the windshield meets the fabric roof.

We’ll have to wait until 2025 to see how much of the ID.LIFE actually makes it into production. As a rolling show of intent, though, it demands to be taken seriously. 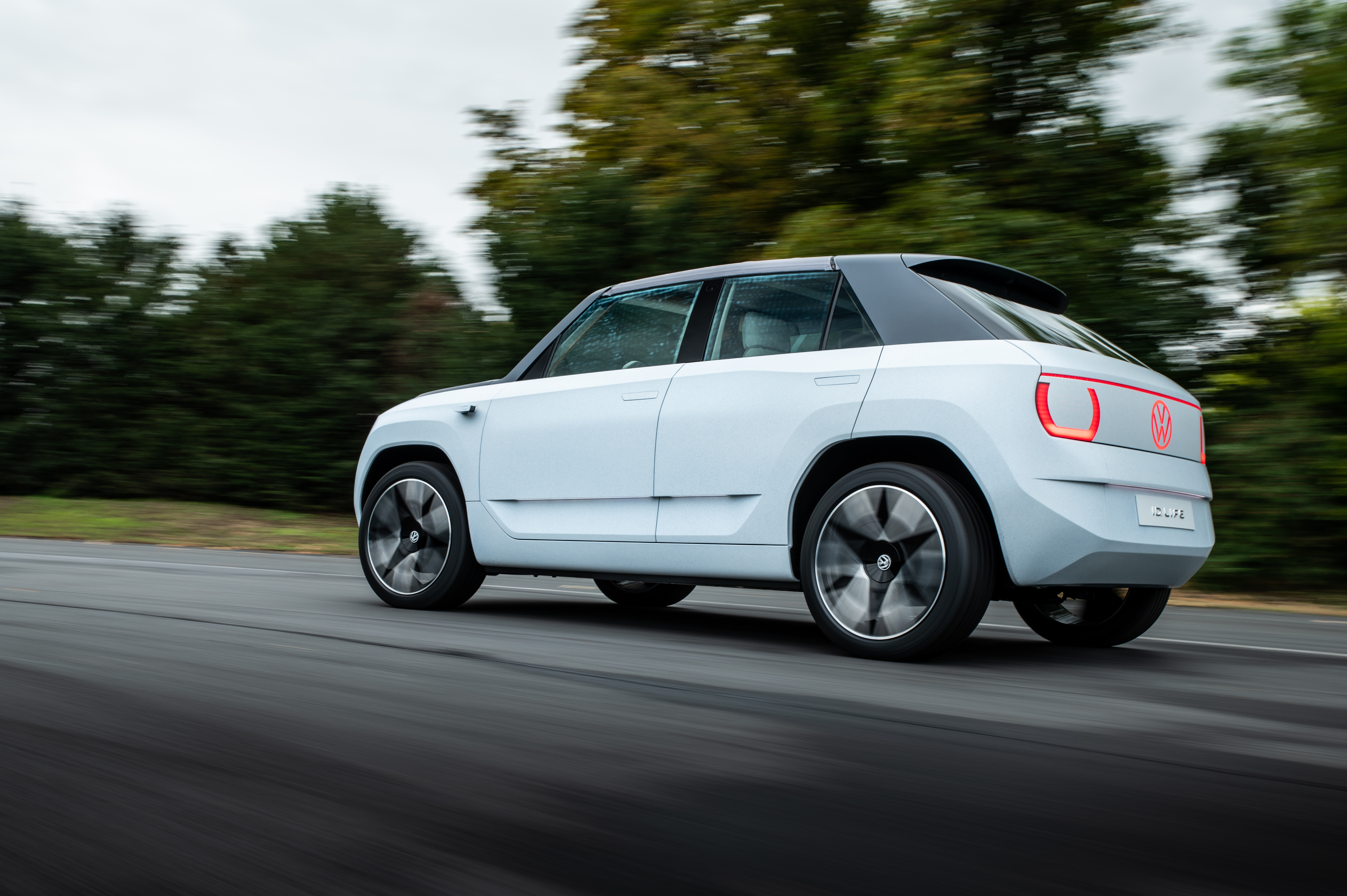