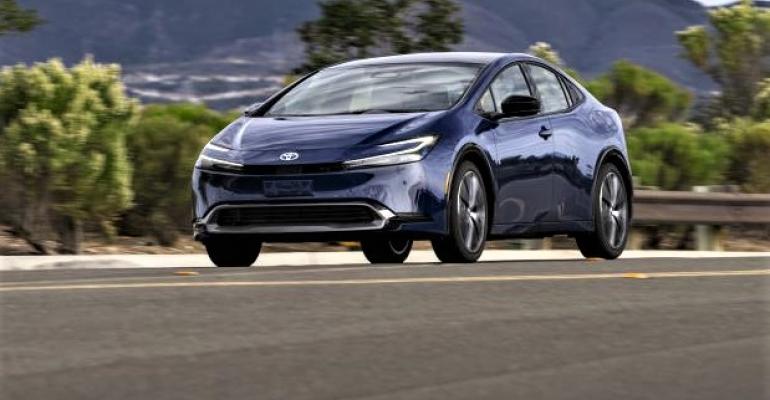 Toyota
2023 Prius on sale in U.S. in January.
Vehicles>Test Drives

The Japanese automaker’s venerable hybrid isn’t what it used to be, and that’s a good thing.

DEL MAR, CA – It is hard to believe it’s been 22 years since the Prius first went on sale in the U.S. The car synonymous with “hybrid” had an incredible run, with volume hitting a crescendo of 188,176 units in the U.S. in 2012, Wards Intelligence data shows.

The Prius was so successful, Toyota even toyed with the idea of creating a Prius sub-brand.

But sales began a downward slide in 2016 and stand at a mere 22,098 this year. The quirky design of the fourth-gen model, the introduction of the tech-ier Tesla Model 3 and Model Y full battery-electric vehicles and Toyota’s own hybrid RAV4 CUV were likely culprits.

So how is Toyota planning to get the Prius back on track? By making it look good.

The fifth-generation Prius wears a sleek (dare we say, sexy?) visage across a body that is lower, longer and wider than before.

Gone is the signature split rear glass, replaced by a single-piece window. Wheels are pushed to the corners and A-pillars are so laid back they may as well be sipping a Mai Tai. The thin but wide upper grille and slanted headlights remind, in a good way, of a sleepy sting ray. The beltline slopes upward from the nose to the tall decklid. The continuous thin-line LED taillight is placed in the middle of a wide, black piece of plastic that spans the width of the vehicle, somewhat reminiscent of a UFO-like, first-generation Oldsmobile Aurora. 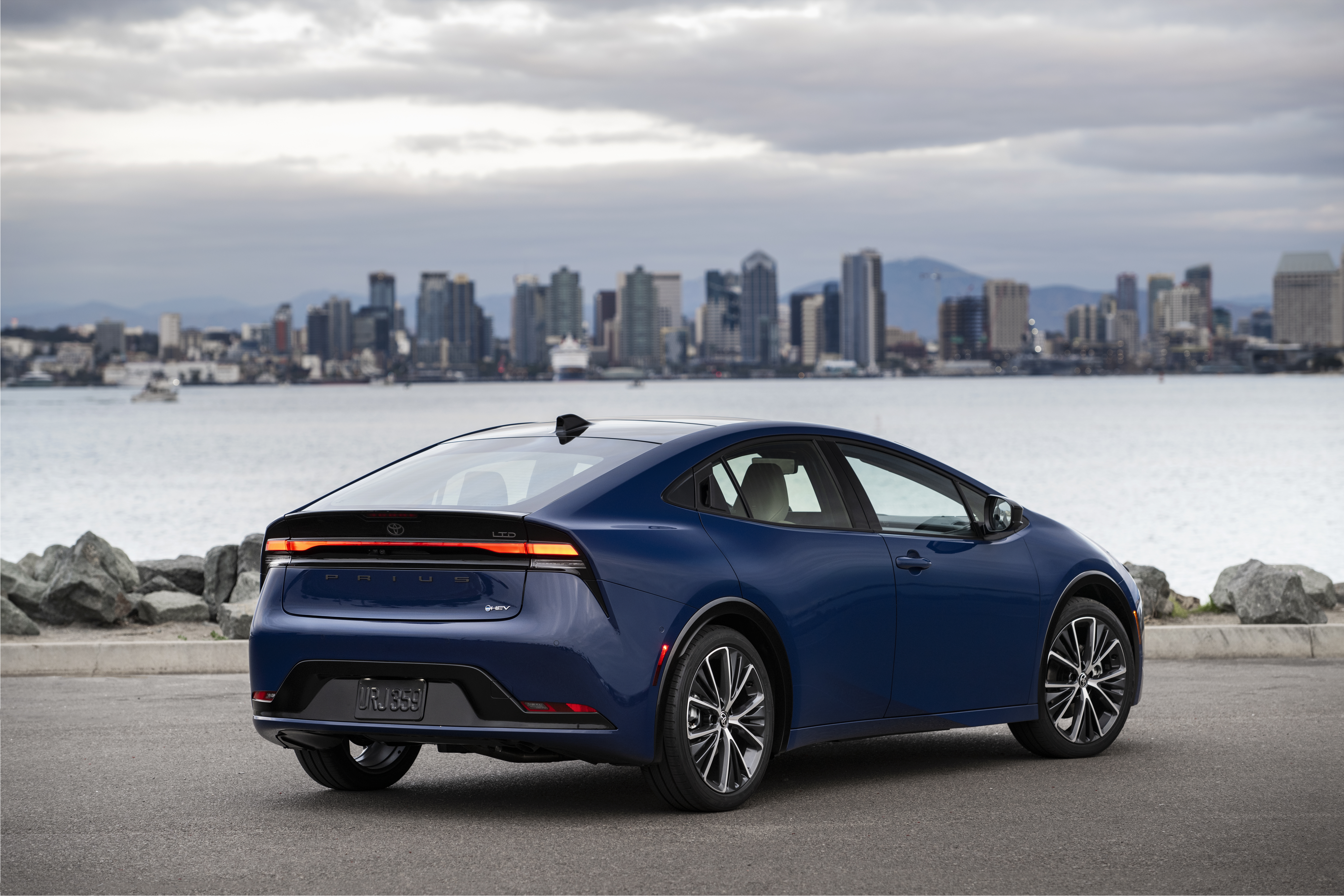 Other than its exterior, the other big news with the ’23 Prius is its still-great fuel economy despite a big increase in power. It maintains roughly the same estimated mpg, 57 mpg (4.1 L/100 km) combined, from the ’22 model for the new the LE base grade.

The Prius still uses a 4-cyl. Atkinson-cycle gas engine, but switches from a 96-hp 1.8L to a new 150-hp 2.0L, plus gets a more powerful motor-generator that drives the front wheels. Net system horsepower grows 60%, from 121 hp in the ’22 Prius to 194 hp in ’23 Prius front-wheel-drive grades and 196 hp in all-wheel-drive models. The car’s front motor-generator makes 111 hp vs. 71 hp in the fourth-gen Prius. The hike in motor output is due to a new electromagnetic steel plate and magnet, with the number of magnets embedded inside the rotor going from three to six per pole.

The car’s lithium-ion battery pack also is 14% more powerful and 14% lighter than before. (There is no longer a nickel-metal-hydride pack in any grade.)

A smaller, rear motor (climbing from 7 hp to 40 hp, fourth gen to fifth gen) enables electronic on-demand AWD in models so equipped. The e-AWD works at all speeds and is the same system already on Toyota’s Corolla, Highlander and RAV4 hybrid models.

The lower ride height and wider body noticeably improve handling vs. that of the outgoing fourth-gen Prius. The new, wider Prius corners flatter and with less body lean than the taller ’22 model.

Electric power-assisted rack-and-pinion steering is nicely weighted in the new car, lighter at low speeds, heavier at high speeds, but not so light as to give it a toy-car feel like an early-aughts hybrid.

Truth be told, we don’t push our ’23 test cars as hard as do some of our colleagues in a quest for fuel economy supremacy. During separate drives of three ’23 Prius models here, one XLE and two Limited grades, fuel economy averages 49.5 mpg, 56.4 mpg and 62.2 mpg (4.8, 4.2 and 3.8 L/100 km). The latter figure mostly is without trying, as we benefit from a largely flat route.

As for the new Prius interior, it’s a design improvement but a materials regression due to more hard-plastic trim. Like the outside of the vehicle, the inside is sleeker and less cluttered than the fourth-gen model. There’s no center stack, just a medium or large touchscreen (8 ins. [20 cm] in the LE and XLE, 12.3 ins. [31 cm] in the Limited and optional on the XLE), with vents and HVAC controls integrated mid-dash. A blue light pipe is a nice dash design flourish, as are contrasting colors on upper seats.

Gone is the fourth-gen car’s central, wide multi-information display located high atop the instrument panel, replaced with a more typical behind-the-steering-wheel display. The MID was big and busy with lots of graphics. But, while the new cluster display has lots of information too, it is presented in smaller fonts and icons. Attracting younger car buyers to the ’23 Prius, as is the expectation of Toyota, may be inevitable given one older driver here tells me he can’t see the trip readout.

The infotainment system is well laid out and uncluttered, with logical menu structures. One slight complaint: Toyota still segments SiriusXM stations into categories, meaning you can’t easily seek or tune from pop to rock to rap, etc. But, with wireless Apple CarPlay and Android Auto standard on the fifth-gen Prius, you don’t have to bother with the native system should you wish for a more personalized infotainment experience. 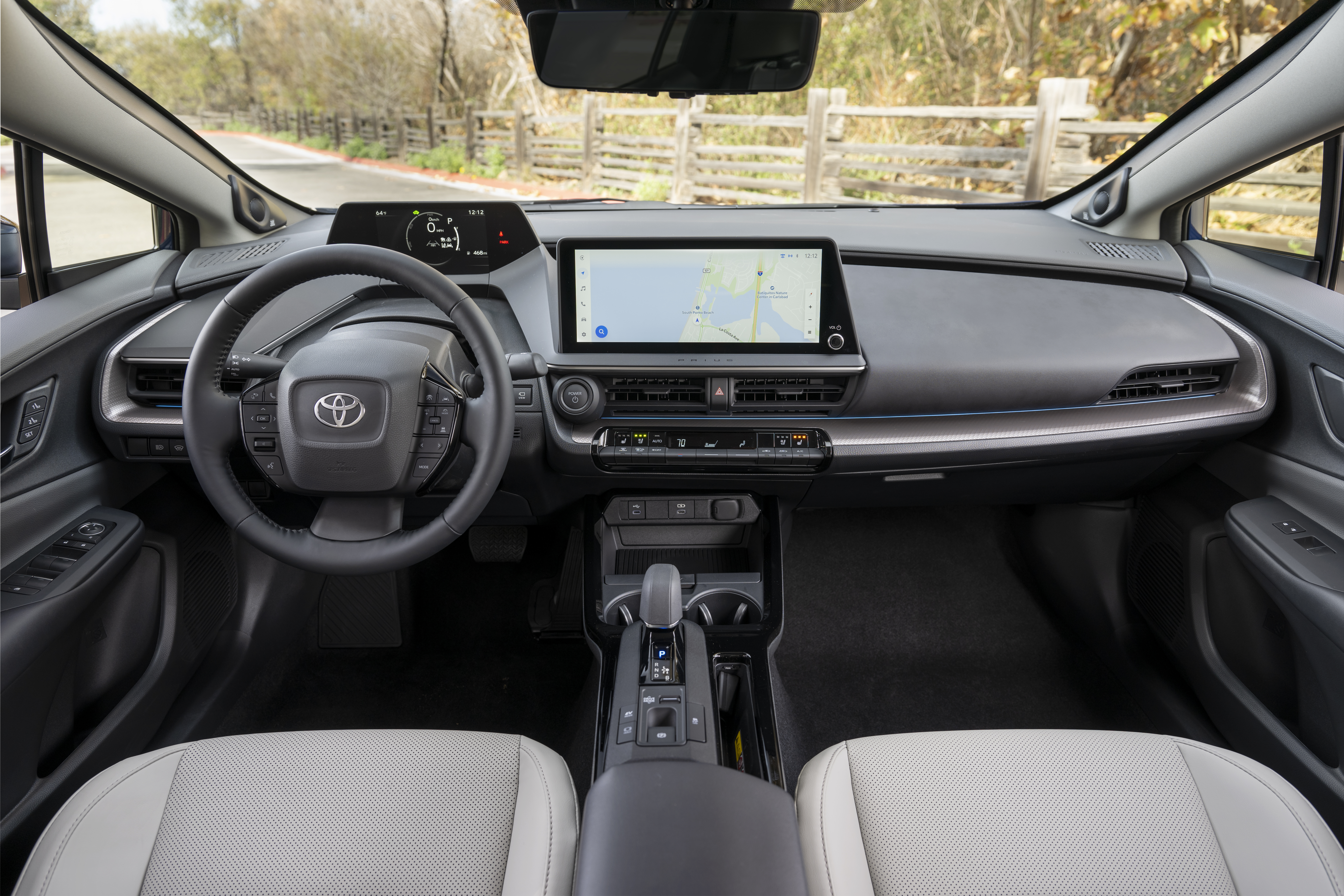 Comfort is good overall, with generous lumbar support for the driver’s seat in our Limited testers and decent legroom in the rear. We’re irked by a pocket on just one rear seatback but consoled by two USB-C ports for rear seat passengers – two of six USB-C ports standard across all grades. (There’s two more up front and another two in the center console. There’s also a Qi wireless phone charger in the front, standard on XLE and Limited grades.)

Like pretty much every ADAS on the market, its performance is wildly divergent, in one instance stopping us gently behind a car making a left turn and then five minutes later almost plowing us into the back of a truck stopped ahead at a red light. Lane line detection is spotty due to faded paint as well as shadows on roads. As we always note, these are merely assist systems. There is no such thing as a self-driving vehicle in the market today. Drivers must always remain aware and ready to take over while ADAS is on.

A school of thought holds hybrids are over and this vehicle should no longer exist, or at least be a plug-in-hybrid only as it will be in Europe. We disagree. While it would be great to get every American into a battery-electric vehicle, it’s simply not realistic right now, for a multitude of reasons. Hybrids still are needed to bridge the gap. And while the new Prius isn’t perfect, it’s pretty darn good, especially for the price point. We would like to see Toyota become more aggressive on BEVs, but again hybrids are necessary, if for no reason other than cost.

A well-appointed, roomy LE base grade begins at $27,450. Unfortunately, that’s not as cheap as the Prius used to be, but no car is. It’s still a great deal considering the fuel economy, the eye-catching styling, performance attributes, tech features and the interior passenger and cargo space. That’s also a price virtually no BEV can touch, save for the Chevy Bolt. Heck, even the Prius XLE and Limited grades, starting at $30,895 and $34,465, respectively, are good deals given most BEVs available in the U.S. today exceed $50,000.

The ’23 Prius, assembled in Tsutsumi, Japan, goes on sale in the U.S. in January, with the yet-to-be-tested Prius Prime PHEV due in the spring. 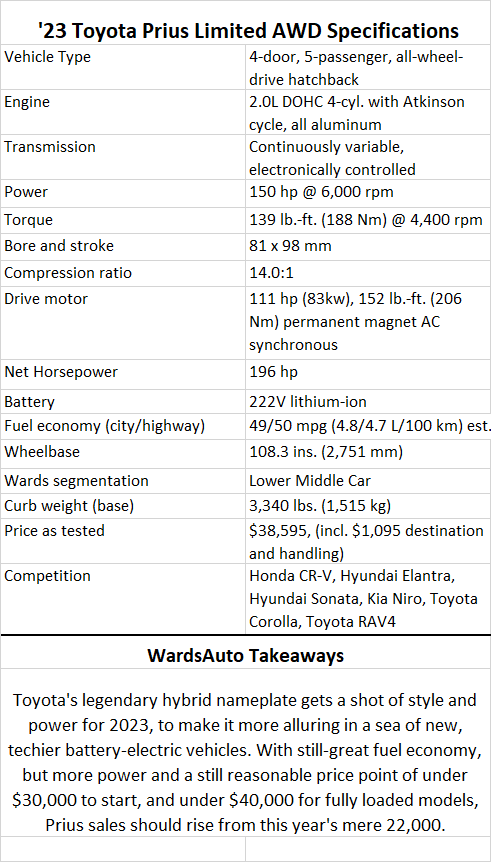