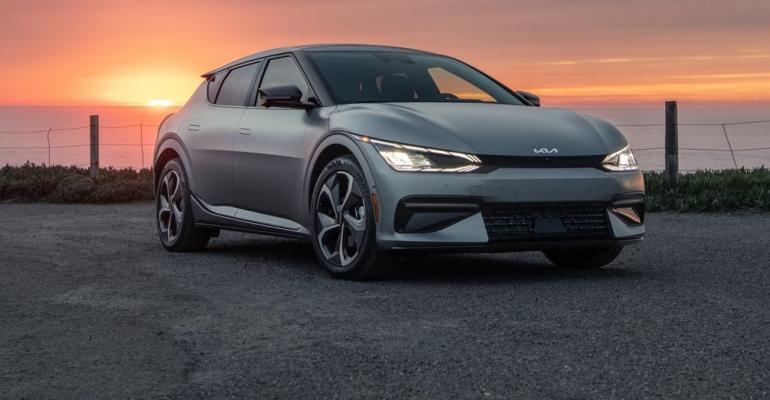 Kia
Kia EV6 due to arrive in showrooms starting this month.
Vehicles>Test Drives

Kia’s new EV6 is larger than it looks, fun to drive and offers very fast charging, but will shoppers see it as a CUV?

There are several things any shopper should know about the ʼ22 Kia EV6, the new long-range electric vehicle from the smaller of the two Korean brands selling in the U.S.

One is that it’s a car. Kia rather hopes customers will see it as a crossover utility, since that’s what most buyers prefer these days over passenger cars. But if so, it may be the sleekest, lowest-appearing CUV in the house. The EV6 (pictured, below) makes even a Porsche Macan or a Lamborghini Urus look tall, blocky and oversized. It has a third window behind the rear door, but it’s vestigial at best.

For the record, NHTSA views the car as a “small station wagon,” but Kia never lets the W-word cross its lips: It’d scare away the shoppers.

Another is that its long, wind-cheating looks are deceptive. In person, the Kia EV6 is a much larger vehicle than photos indicate. The 114.2-in. (2,901-mm) wheelbase is identical to the Kia Telluride 3-row crossover, and its roof height, at 5 ft. (1.5 m), is almost neck-high to a 6-foot driver. 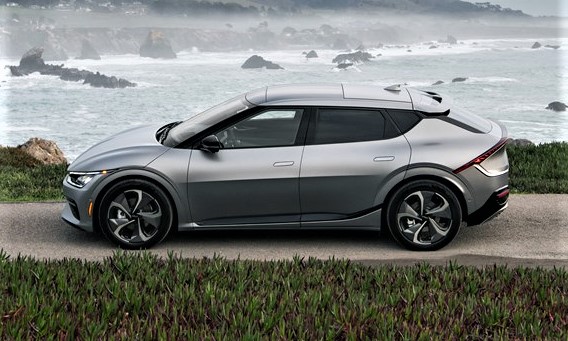 Finally, the EV6 is a very competitive new electric entry with a feature too many shoppers fail to focus on: very fast DC fast charging, due to its 800V battery architecture. We didn’t get a chance to recharge our EV6 test cars, but this reporter has seen the same hardware – wearing a Hyundai Ioniq 5 body – charge at more than 200 kW. Under optimal conditions with a largely discharged battery, this lets an EV6 add up to 180 miles (290 km) of range in 15 minutes using a 350-kW charging station.

For the record, only four cars on the U.S. market can accept 800V charging today. The EV6 and Ioniq 5 are two of them; the others are the six-figure Porsche Taycan and Audi e-tron GT. Pretty nice company to be in, eh?

On the road, we found the EV6 more composed and sure-footed in spirited driving through twisting roads than was its platform-mate Ioniq 5. That parallels the experience of reviewers in Britain, where the car has been on sale for several months. 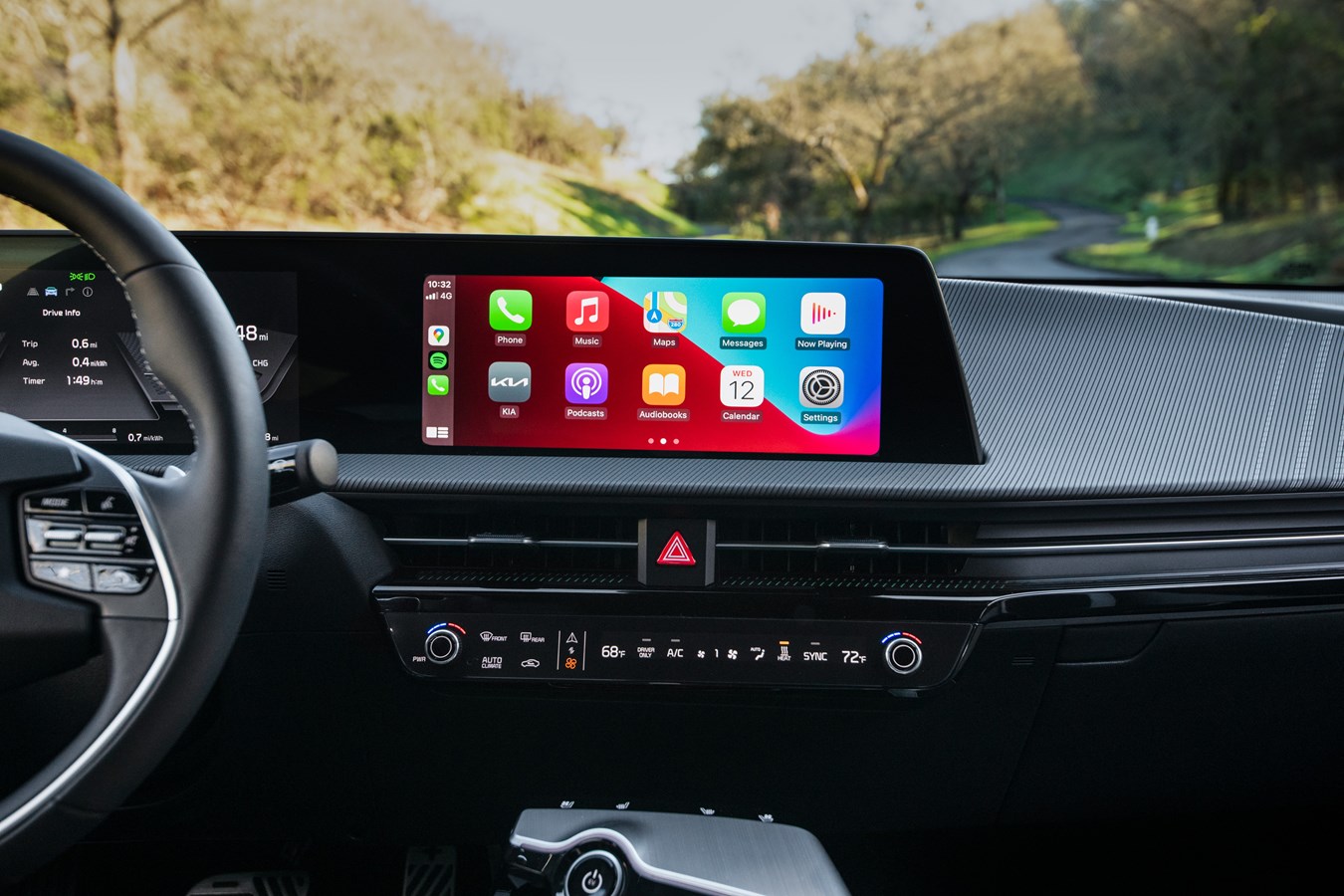 Behind the wheel, drivers are faced with an instrument cluster plus the familiar icons of Kia Connect (nee UVO) on the center touchscreen (pictured, above). The EV6 offers a wide suite of standard and optional advanced driver-assistance systems, including the latest Highway Driving Assist II adaptive cruise control with lane centering. During the one leg in which we used it, we found HDA II superior to similar systems from Toyota and Honda.

On the road, the EV6 is similar to many EVs: Acceleration is swift off the line, and the entire driving experience is calmer and quieter than comparable gasoline vehicles. Driving modes include Normal, Sport, and Eco; we left the car in Normal most of the time, with intervals of Sport when quick passing on two-lane roads was required.

Kia expects 70% of EV6 buyers to be new to electric vehicles. The remaining 30% of owners with prior BEV experience likely will ask immediately about one-pedal driving abilities. The EV6 has three levels of regenerative braking, invoked by pulling back on the left steering-wheel paddle (pictured, below left). The lowest essentially mimics a car with an automatic transmission, while the highest is suitably aggressive but ends below 10 mph (16 km/h). 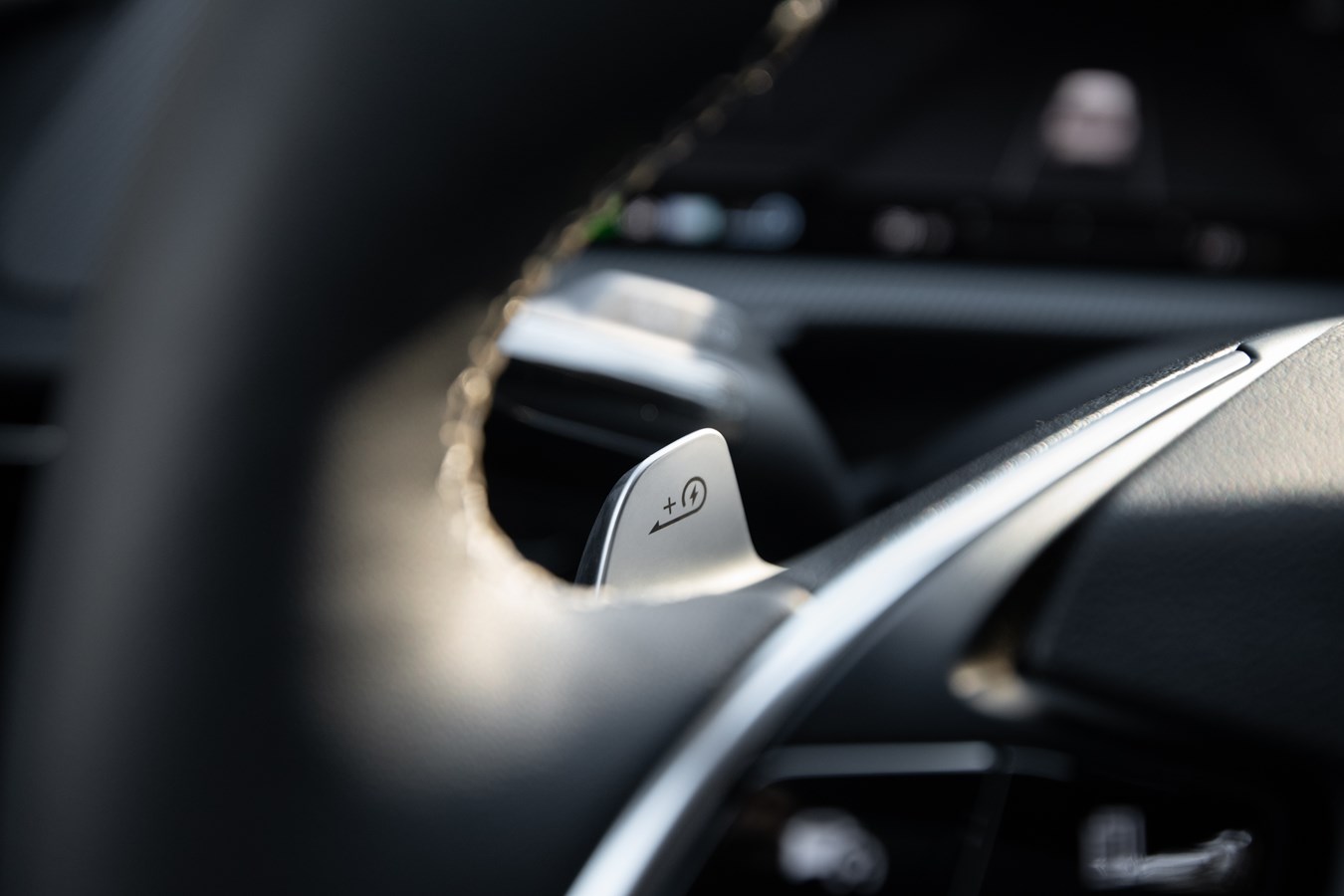 True one-pedal driving is possible by pulling the paddle one additional time to switch on “i-Pedal,” which blends regenerative and friction braking to decelerate down to 0 mph. Frustratingly, the level of regeneration set by the driver endures through power cycles, as does the Auto Hold stopped-braking function, but i-Pedal must be restarted each time –unlike, say, the Chevrolet Bolt BEV.

Overall, the EV6 is a pleasure to drive: sufficiently responsive in Normal mode, muted in Eco mode and feisty enough in Sport mode – with a higher-performance GT model (not “GT-Line”) promised soon.

Given the unusual mix of driving, with hilly climbs of 2,000 ft. (610 m) and some acceleration testing, it wouldn’t be fair to quote efficiency data. We’ll just say we’d expect the EV6 to come in at 3.0 miles (4.8 km) per kWh or better in most temperate-climate uses.

Heat Pump, but No Charging Cable

For less temperate climates, the EV6 bundles useful winter features with its AWD models. Each one includes heated front and rear seats and steering wheel, along with an additional Snow Mode that splits torque 50-50 front and rear. The AWD models also include a more efficient heat pump for cabin heating and cooling; Kia says this cuts heating-related range loss from 30% to 17%, a difference of about 40 miles (64 km).

One oddity of the EV6 is that it won’t be sold with an accessory charging cable, due largely to Kia wanting to keep each version within a specific weight class. The company expects a majority of EV6 buyers to charge at home, a safe bet for four out of five households affluent enough to buy a new vehicle these days. Following several questions from startled reporters, Kia executives at the media drive promise accessory cables will be available at every dealership “very soon” after the car launches.

Unlike Hyundai’s Ioniq 5, the ’22 Kia EV6 will be launched simultaneously in all 50 states. Kia execs say their goal is to have at least one EV6 in every one of its more than 750 dealerships by the time an ad for the new BEV airs Feb. 13 during the Super Bowl. 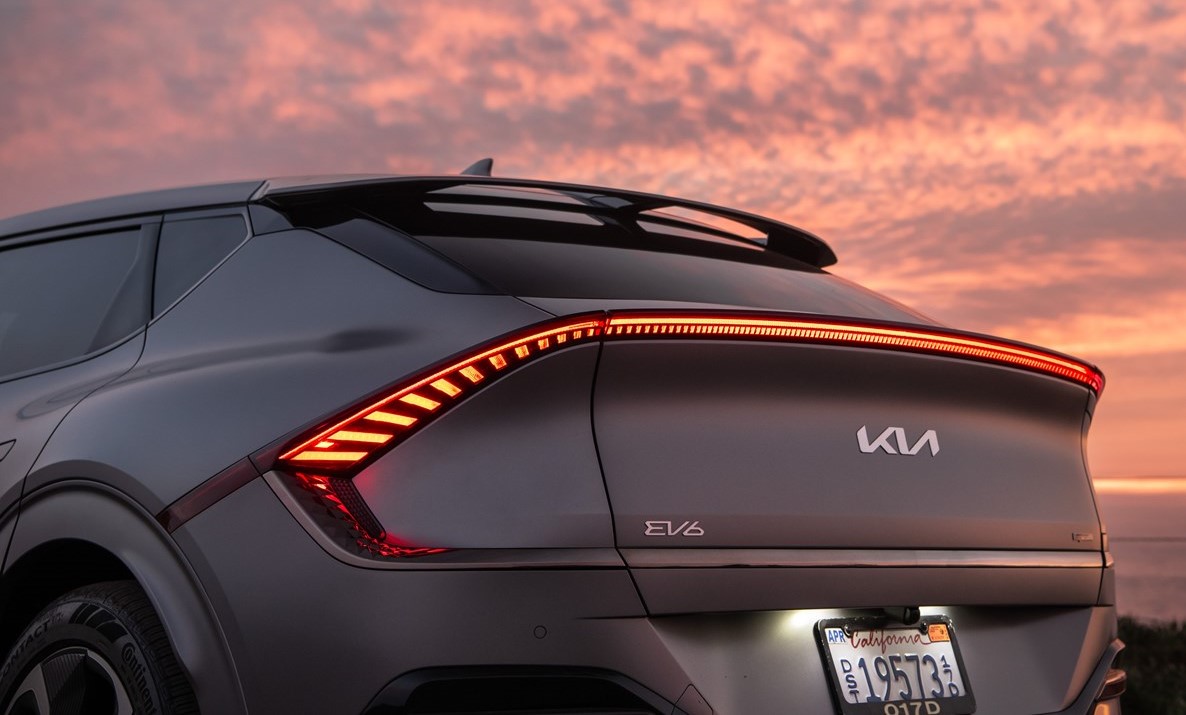