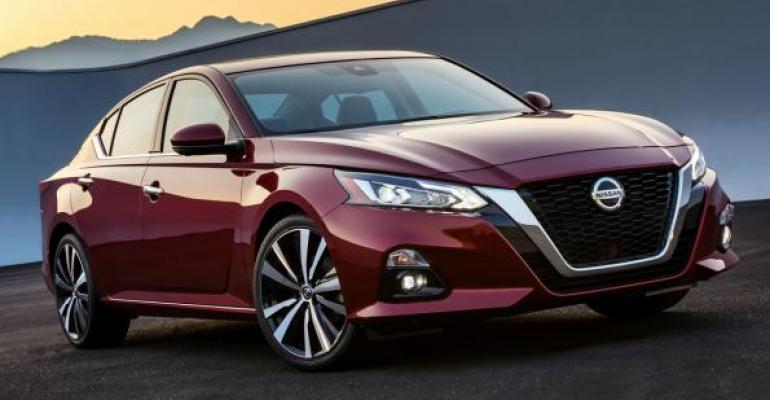 Two great engines that make the car fast and fuel-efficient, as well as loads of safety and convenience technology, should give Nissan’s newest iteration of its midsize sedan a fighting chance in a sinking segment.

SANTA BARBARA, CA – The plight of the midsize sedan has been well documented. They used to be the belle of the ball until those newfangled CUVs stole the limelight.

Yes, sales of the once most-popular vehicle type in America are down. Way down. A segment that at its peak tallied 6.07 million deliveries in 1978 and 3.07 million as recently as 2014 last year recorded 2.19 million sales, per Wards Intelligence data.

Chrysler already has bailed on the group, and Ford has said it will bail when the current Fusion finishes its run.

Toyota and Honda, retailers of the No.1 and No.2 best-selling midsize sedans in the U.S. and the Altima’s traditional top cross-shops in the segment, have seen sales of their respective Camry and Accord models fall this year despite new generations of those vehicles intended to raise sales.

Nevertheless, Nissan is undaunted, investing big in a new generation of its Altima while noting even if it sells 200,000 copies per year (and not the usual 300,000) that’s still hefty volume.

After spending a day behind the wheel of a few different flavors of the redesigned ’19 Altima, on sale in the U.S. this month, we conclude midsize sedans aren’t dead yet and offer more fun behind the wheel and bang-for-your-buck than a CUV.

The new, sixth-generation Altima is roomy, refined and fast.

The “fast” is due to two great engines.

Nissan gives the Altima the first non-Infiniti application of the luxury brand’s variable-compression-ratio turbocharged engine, VC-Turbo for short. The mill is a dutiful replacement for the legendary 3.5L VQ V-6 (a longtime Wards 10 Best Engines winner) in the outgoing Altima.

Making 248 hp and 280 lb.-ft. (380 Nm) of torque, the 2.0L 4-cyl. VC-Turbo pulls your face back, thanks to torque peaking as low as 1,600 rpm, and delivers power smoothly without lag. The horsepower figure is using premium fuel, while using regular cuts 12 hp and 13 lb.-ft. The 2.0L VC-T is available in SR and Platinum grades and is the sole engine in the limited-volume Edition One launch grade.

Thanks to unique multi-link connecting rods, compression ratio varies from 8:1 to 14:1, the former giving more power for spirited driving and the latter improving fuel economy during cruising.

However, the Altima’s base engine, a 2.5L naturally aspirated 4-cyl. with direct injection, isn’t the red-headed stepchild. While its output looks modest on paper – 188 hp and 180 lb.-ft. (244 Nm) of torque peaking at 3,600 rpm, it drives bigger and is extremely refined. Accelerating onto the CA-23 freeway up an on-ramp is a revelation – lightning fast as we quickly match the 70 mph (113 km/h) speed of prevailing traffic.

Nissan claims the 2.5L isn’t carryover from ’18 but 95% new, boasting such features as an integrated exhaust manifold, new direct injection and cooled exhaust-gas recirculation. It also is said to have a “world-first” thermal-insulated resin intake port for reduced noise, vibration and harshness.

Like many low-and-wide midsize sedans the Altima has great toss-ability, apparent while zipping through the switchbacks of the Santa Ynez Mountains near here.

For added agility, Nissan engineers extended the car’s wheelbase and reduced body weight by increasing aluminum content and upping the amount of high-strength and ultra-high-strength steel in the body structure. It also has 10% more lateral and roll stiffness and a 15% reduction in longitudinal stiffness, to reduce body motion and impact shock, respectively.

The ’19 Altima gets the car’s first application of rear monotube dampers and dual-pinion electric power steering.

While a benefit of the latter system is said to be reduced steering effort at low speeds and increased effort at higher speeds, we find steering on our 2.5L Platinum front-wheel-drive Altima ultra-light with little resistance at lower and mid speeds. It makes us wish we took a sportier SR grade to tackle the twisties as the steering feel, or lack thereof, doesn’t inspire handling confidence. A note: There is no “Sport” mode in the Altima, which in other vehicles typically brings about heavier steering feel when activated.

We get great fuel economy during two test drives of two different grades, the 2.5L Platinum FWD model and the 2.0L VC-Turbo Edition One.

Our second leg, behind the wheel of the VC-Turbo-powered Edition One, earns a whopping 38.0 mpg (6.2 L/100 km), overshooting its 34-mpg (6.9 L/100 km) highway rating on a route up Pacific Coast Highway/CA-1 and with heavy use of adaptive cruise control.

Both Altima engines are matched to a CVT. Nissan is a longtime CVT proponent and has refined the transmission so much that it lacks the characteristic droning or rubber-banding that many associate with the transmission type. Helping make it familiar to drivers of traditional automatics are faux step gears Nissan has built in to simulate shift points.

The Altima’s infotainment system is hugely improved from those of current Nissans and boasts a new 8-in. (20-cm) touchscreen.

Color and resolution are bright, virtual buttons are large and thus easy to select while the car is in motion, response times to inputs, both touch and verbal, are fast and phone pairing quick.

The interior is roomy and comfortable, helped by new front seats with better lateral support for the long-legged.

Fit-and-finish in our test vehicles is above par, and we are delighted by the unique perforation pattern on leather seats (best described as wheat-like stalks) and pin-less overhead grab bars.

That said, there are couple quibbles. Voice recognition requires some unnatural speaking (i.e say “Audio” or “Phone” first before whatever command you want to give) and changing map view is a multi-step process (Settings>Navigation>Map Settings) requiring a dive into menus.

Apple CarPlay and Android Auto are standard on the new Altima, as Nissan considers both the price of entry into the new-vehicle market today.

The car also is compatible with Amazon Alexa Skill and Google Assistant Action via Nissan’s telematics plan, enabling an owner to remotely start their vehicle via an Amazon or Google smart speaker.

Vehicle styling isn’t a huge departure from the outgoing generation, with the same general silhouette, but now with more pronounced creasing.

The Altima offers a large suite of Nissan ADAS technologies in grades SV and above, including its ProPilot Assist technology, blending adaptive cruise control with active steering and already available in the new Leaf EV and Infiniti QX50.

Our experience with ProPilot here on the Edition One Altima was the best yet, as the system rarely lost sight of lane lines, something that frequently happened during spring and summer tests of the Leaf in Michigan.

Adaptive cruise control also easily finds and tracks the vehicle ahead of ours during the PCH leg and has reaction times similar to a human driver.

Hoping to appeal to a wide swath of buyers, pricing for the new Altima begins at $23,750, not including $895 destination and handling, and tops out at just under $36,000 for an Edition One minus any options.

All-wheel drive, optional for the first time on the Altima, is a $1,350 option on 2.5L grades and an effort by Nissan to woo those who may go to CUVs simply for the feature.

Models with the base engine have been Altima’s best-selling, the reason why Nissan chose to pair AWD with the 2.5L and not the 2.0L VC-Turbo. The on-demand system can distribute torque evenly front-to-back at startup, 100% to the front for better fuel economy or 70% to the rear for improved cornering.

Typically sunny and dry California weather doesn’t provide much of a test during a brief jaunt in a Platinum AWD grade. Nissan is counting on the model appealing more so to buyers in the Northeast and other winter-weather regions, while noting AWD does give some handling and safety advantages in temperate, rainy climates, too.

Nissan hopes to woo young buyers who don’t want to drive mom and dad’s vehicle (i.e. a CUV or SUV). But the high seating position and increased cargo volume of CUVs is so alluring that it’s hard to imagine the downward decline in midsize-sedan sales reversing anytime soon, even among Gen Y and Z.

But for those still wanting a 4-door, D-segment car, the offerings, Altima included, never have been better. 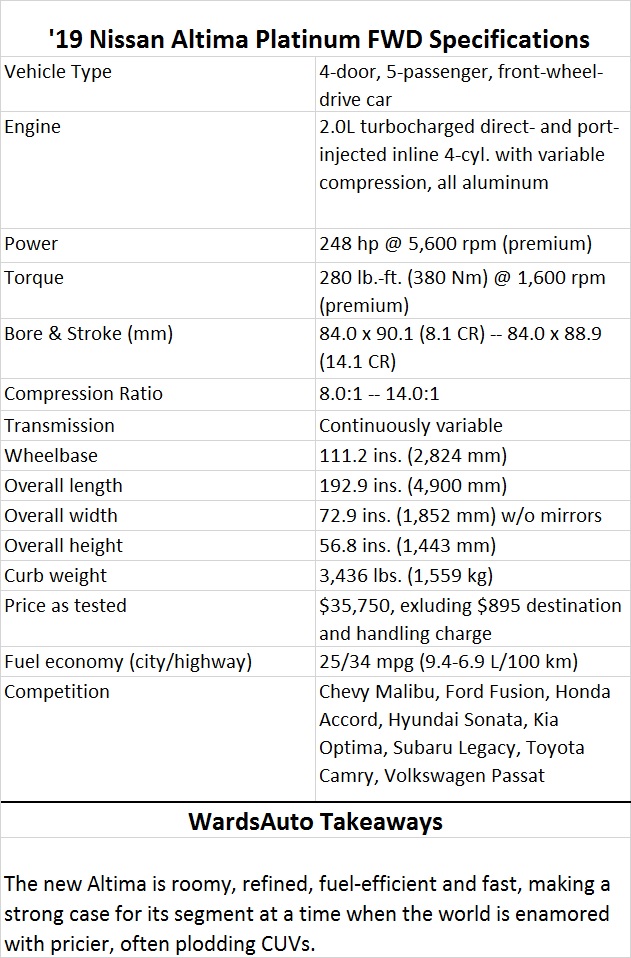