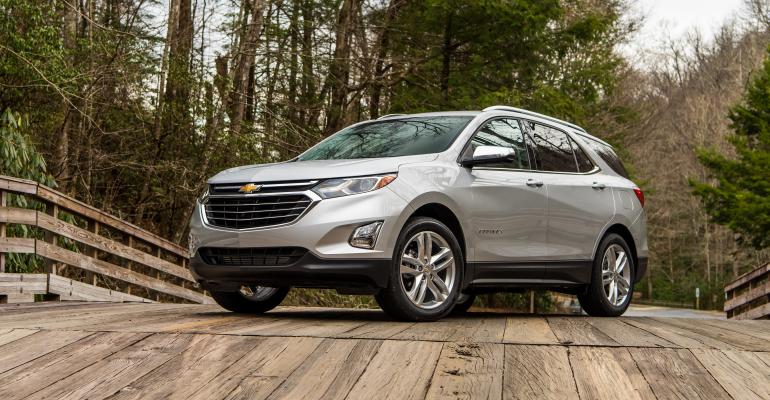 ’18 Chevy Equinox Plays It Down Middle

The &rsquo;18 Equinox is redone from head to tail in a bid to surge ahead of key competitors such as the newly redesigned Honda CR-V and Nissan Rogue.

ASHEVILLE, NC – If ever there was a product to epitomize the raging popularity of CUVs, it is the Chevy Equinox.

Not only has the 5-passenger crossover sold 2.2 million units since its introduction in 2004, according to WardsAuto data, it is the second-best-selling Chevy behind the Silverado and the fourth best-selling CUV in America.

Perhaps more impressive, the Equinox has accounted for 1.7 million deliveries since it was redesigned in 2009, and last year, its eighth and final full year on the market, sold a head-shaking 242,195 copies when there were nearly 100 newer CUVs to choose from.

Product planners at General Motors deserve a nod for delivering the right package of cargo room, easy ingress and egress, an upright view of the road and good fuel economy, but the staying power of the Equinox also illustrates if the crossover were a food it would be a good old ribeye steak.

Into this feeding frenzy saunters the ’18 Equinox, which is redone from head to tail in a bid to surge ahead of key competitors such as the newly redesigned Honda CR-V and Nissan Rogue.

The latest Equinox receives a more contemporary exterior design, as well as a stylish and connected interior to go with an all-new engine lineup and a lighter body structure.

The front end of the Equinox more closely resembles others in the Chevy lineup, most notably its big brother, the Traverse. The gold bowtie is positioned prominently atop the 2-piece grille and standard projector-beam headlamps are wafer-thin, wrap sleekly around the corners of the car and are bookended by turn signals and fashionable, energy-saving LED daytime running lamps. It is a likeable face.

Along the body side of the Equinox, a pair of feature lines gives the CUV a sculptured appearance. One line shoots off the front panel of the car before falling into the rear wheel well, while the second one runs straight off the rear taillamp and forward through door handles.

A third feature line near the bottom of the door panels plays with natural light to add more character to the profile of the Equinox. A flash of chrome trims the greenhouse and roof rails for a bit of bling, while a small dose of cladding along the sill and front and rear fascia conveys a degree of ruggedness. Altogether, there’s a little something for everyone in its appearance.

The rear of Equinox is wide to suggest a planted stance, as well as offer easy cargo loading through the liftgate, which now includes a hands-free feature by swiping a foot under the rear bumper.

Inside, leather trims the front and rear seats, as well as the steering wheel, of our range-topping Premier model. A pair of optional packages adding $5,215 to the test car includes items such as newly available 19-in. wheels, a Bose 7-speaker audio system, Chevy MyLink infotainment and navigation with an 8-in. (28-cm) touchscreen, a heated steering wheel, cooled driver and front-passenger seats and heated outboard seats for the second row.

The packages also outfits the Equinox for the first time with advanced safety items such as low-speed forward automatic braking, a haptic seat to alert drivers of a potential crash or unseen pedestrian, an indicator to monitor the following distance of a car ahead, a 360-degree overhead view of the car to complement its backup-camera image, and high-beam headlamps that shut off automatically in city settings or when another car approaches.

OnStar concierge service with a 4G Wi-Fi hotspot carries over to the ’18 redesign. The hotspot is a key competitive advantage for the Equinox and works as flawlessly along the rural Blue Ridge Parkway as it does in bustling downtown Asheville. The AT&T connection is available for the first time with an unlimited data package for $20 per month.

Apple CarPlay and Android Auto connectivity also remain, but my iPhone took several attempts to launch and there was some latency to the icons on the infotainment screen, hiccups I’d never experienced in a Chevy product previously. Android phones charge wirelessly.

Although the exterior of the Equinox is 4.7 ins. (119 mm) shorter than the outgoing model, interior volume grows by 3.5 cu.-ft. (0.6 cu.-m). Rear seats are a 60/40 split and now fold flat enough to slide items all the way up to the front seatbacks without snagging. The truck feels roomier than its predecessor, too, suggesting the 400 lbs. (180 kg) it lost between generations led to noticeable gains in shoulder and hip room.

But the interior gains the most ground. Part of it is owed to the outgoing model being so darn long in the tooth, but the cabin of the ’18 Equinox is modernized and more functional. For example, the saddle-on-black combination of my tester resembled black jeans paired with fashionable brown loafers. Soft aluminum decoratively frames HVAC openings and the steering wheel, while chrome trims key touchpoints such as the ignition button, cupholders and door pulls.

The MyLink touchscreen is brought forward and sits more upright atop the center stack, so it is easier and safer for the driver to browse its functions. There are fewer buttons and dials on the center stack for a cleaner look and redundant steering wheel controls are bigger and simplified to heighten ease-of-use.

Under the hood, the Equinox does away with its longtime 2.4L gasoline 4-cyl. in favor of an all-new 1.5L gasoline turbo 4-cyl. as standard equipment. Later this year, a 2.0L turbo gasoline 4-cyl. and a 1.6L turbodiesel 4-cyl. will join the lineup as options.

The 1.5L turbo motivates the Equinox well enough during casual driving, although it works awfully hard on the hills and through the curves where the turbo rarely rests. A lazy 6-speed automatic does it no favors, either. It is reluctant to kick down a gear after stabbing the throttle and leaves the impression all that weight loss went for naught.

At the same time, the model tested here returned an impressive 30.8 mpg (7.6 L/100 km) in a mix of city driving and twisty mountain roads, so what the Equinox sacrifices in responsiveness it makes up for in efficiency. Nonetheless, smart shoppers might want to wait for pricing on the optional engines, because they will have much more punch and come with an efficiency-boosting 9-speed automatic.

The chassis feels stiff and for a taller vehicle body lean is surprisingly limited. It is outfitted with MacPherson strut suspension up front and a 4-link independent design in the rear to absorb bumps nicely. Electronic power steering is precise.

The new Chevy Equinox occupies a fiercely competitive segment where buyers almost could close their eyes and pick a winner. For example, the daring Rogue arguably remains the more expressive choice stylistically, while the social-climbing CR-V lays on more luxury and the Mazda CX-5 deserves a look for its zoom-zoom credentials. Within that sample set, the Equinox would be the eyes-wide-open choice, a medium-rare cut with appeal for the masses.