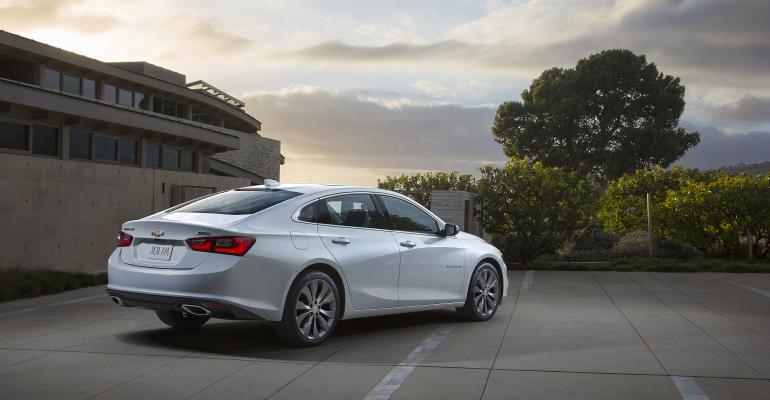 After several years of missteps for a long list of both objective and subjective reasons, the second-best selling Chevy car rights the wrongs of the recent past and hits all the high notes.

PALO ALTO, CA – Americans might be running wild to CUVs these days at the expense of midsize cars, but with 3 million sales annually it would not be accurate to call the good-ole family 4-door a wilting flower.

That’s why automakers keep throwing the kitchen sink at the midsize segment by taking styling risks and adding the hottest technology under the hood and onto the dashboard.

Count the ’16 Chevy Malibu, filling U.S. dealer lots now, among that new generation of 5-passenger stalwarts. After several years of missteps for a long list of both objective and subjective reasons, the second-best selling Chevy car rights the wrongs of the recent past and hits all the high notes.

Whether it will in the near term put a serious challenge to the segment’s runaway leaders, the Toyota Camry and Honda Accord, remains to be seen. But the new Malibu is really good. Outstanding, in fact.

With a stout and fuel-efficient entry-level engine, a sleek, coupe-like exterior design and an interior chock full of comfort, connectivity and an exciting color palette, the new Malibu deserves a fair share more of the segment than the 8.1% it ekes out today. The Camry and Accord, by comparison, command 17.9% and 14.9%, respectively, according to WardsAuto data.

It all starts with the Malibu’s 1.5L turbocharged 4-cyl., a base package that feels light years ahead of the 2.5L 4-cyl. it replaces. The new I-4, a cornerstone of a fresh line of boosted and naturally aspirated small-displacement Ecotec engines from General Motors, eclipses the EPA-rated fuel economy of its predecessor while providing far superior drivability.

Punch the throttle on the all-aluminum DOHC unit and it responds enthusiastically. Full boost starts at 2,000 rpm and carries through to 4,000 rpm. The little engine is so pleasurable to operate, even in a car weighing nearly 3,200 lbs. (1,451 kg) as tested, it eliminates any compromise buyers would make to save a few bucks by choosing the base powertrain.

The engine does run out of breath at highway speeds and could use a little more refinement, shortcomings that narrowly kept it off the 2016 Wards 10 Best Engines list. It also benefits greatly from being in a redesigned Malibu that is 300 lbs. (136 kg) lighter than the previous-generation model, but that’s the beauty of lightweight engineering.

A 2.0L turbo 4-cyl. returns as the premium engine offering in the Malibu. It is detuned a bit from the ’15 model, but with the car’s overall weight savings it delivers superior fuel economy without diminishing drivability. Its ace-in-the-hole is an all-new 8-speed automatic transmission.

Both engines are housed in a body structure that gets a good dose of high-strength steel, which allowed engineers to perform their lightweight magic, and gives the Malibu a rock-solid feel on the roadway.

There’s a hybrid model on the way later this year, too. GM’s past attempts at electrifying the Malibu have been unspectacular, but this time the automaker brings its A-game with technology borrowed from the Chevy Volt extended-range electric vehicle, which nabbed its second Wards 10 Best Engines award this year.

The Malibu Hybrid combines a 1.8L 4-cyl. with a 2-motor drive unit that assists during acceleration. Electric power comes from an 80-cell, 1.5-kWh lithium-ion battery pack capable of electrically propelling the car up to 55 mph (89 km/h). Regenerative braking technology maintains the battery’s charge.

The hybrid also features GM’s first use of exhaust gas heat recovery. The technology helps warm the engine and the cabin, and taking that responsibility away from the engine improves fuel economy.

The hybrid boasts all the comfort and convenience of the gasoline model in a surprisingly refined electrified powertrain. By two motors – one for low speeds and a second for higher speeds – the Malibu Hybrid drives more like an everyday car than most other strong hybrids. GM engineers also nailed the brake feel, a downfall of many regenerative systems.

Stylish Outside, Connected Inside

Exterior styling finally strikes an elusive chord, with a contemporary, coupe-like profile. It’s longer and lower than its predecessor but maintains the same width, giving the Malibu a sleek, planted appearance that emulates the stylish Chevy Impala large sedan. The body sides are sculpted, which gives the car more character, and the Malibu’s nose is lower with smaller, cat’s-eye headlamps to accentuate its windswept appearance.

GM designers slammed the grille down, too, further enhancing its aggressive stance, and decorative LED lighting replaces the old model’s halogen lamps to make the Malibu look more like a luxury car.

The interior is more of a revelation than a redesign. Surprise and delight abounds with an emphasis on comfort and connectivity, such as an easy-to-use 7-in. (17.8 cm) color capacitive touchscreen that is standard on most models to 1.3 ins. (33 mm) of additional rear legroom. And yes, rear-seat passengers can get in and out of this Malibu without knocking their feet against the B-pillar.

Also gone is the 2-tier dashboard, a look that got outdated quickly as a result of more refined competition. GM designers take a layered approach this time around and it is smashingly good, especially on models with colorful 2-tone interiors.

There’s greater delineation between the infotainment and climate-control systems on the HMI, while the gauge package appears pulled from a German luxury sedan. Seats are supportive and comfortable, and the steering wheel has more heft and its 3-spoke design is more fashionable.

Pairing a smartphone to Chevy MyLink is a snap, and customers can choose from Apple CarPlay or Android Auto to complement a connectivity package that again boasts an OnStar 4G LTE wireless hotspot and wireless phone charging for the first time.

But all is not perfect with the new Malibu. Models tested here had headliners with ragged edges and sizeable gaps where they meet the windshield. A model tested more recently suggests GM detected the flaw and is working to remedy it. There’s some puckering on the leather, where seams should be tightly sewn.

The driver’s-side power mirror also failed on one model. That’s ironic given all of the standard and optional active-safety technology on the car, including a Teen Driver system that acts like an automated driver’s-education teacher complete with available electronic report cards. Don’t forget to turn it off, though, and pairing your phone or music cache will be frustratingly difficult.

Road noise from the front wheel wells seemed excessive, too.

Those hiccups, however, fail to tarnish an otherwise impressive, all-around execution of the modern family 4-door.