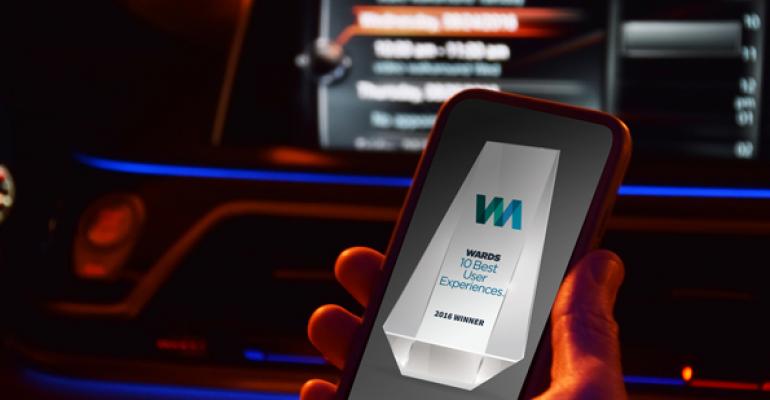 The all-new Wards 10 Best User Experiences competition drills deeply into the user-friendliness of vehicle systems designed to minimize distraction and frustration, prevent accidents and improve safety in neighborhoods and on the highway.

The inaugural selection of the best “user experiences” in today’s vehicle yields a list with three American automakers, three German, three Japanese and a Korean, illustrating that every major market in the world is engaged in this vital and rapidly growing aspect of vehicle development.

The 2016 Wards 10 Best UX competition was created as a spin-off of 10 Best Interiors, which looks more generally at aesthetic, ergonomic and design aspects of today’s passenger compartments.

Wards 10 Best UX drills more deeply into the user-friendliness of vehicle systems designed to minimize distraction and frustration, prevent accidents and improve safety in neighborhoods and on the highway. 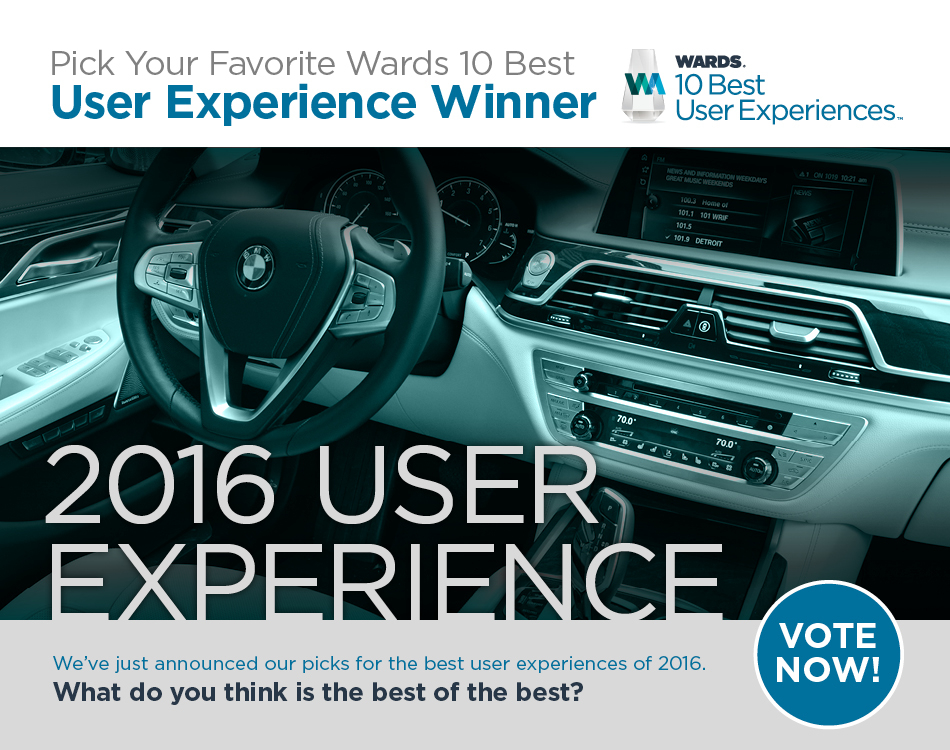 “We’re paying close attention to touchscreens, navigation systems and infotainment, and we want to know if voice controls work well and if connecting your smartphone is simple,” says WardsAuto Senior Content Director Drew Winter in explaining the judging criteria.

“We’re trying to quantify how easy it is overall to interact with a vehicle,” he says. “Are controls easy to understand, or do you have to consult the owner’s manual? Are the driver-assistance systems, such as adaptive cruise control and lane-keeping, functioning reliably, and do the interior materials enhance the user experience?”

The Q7 is one of four CUVs making our list, and it gets high marks for its excellent sound system and the extreme intelligence of the adaptive cruise control system, which is linked to navigation and automatically slows the vehicle when a turn is coming up, which is helpful if the driver isn’t paying attention.

One of our judging criteria recognizes a user experience that delivers “surprise and delight” to the driver, and the Audi Q7 does that many times over.

From the high-resolution, brightly colored graphics and simple phone pairing to the much-appreciated redundant dials, available WiFi connectivity and mesmerizing Virtual Cockpit, the Q7 makes for a user experience that is intuitive and easily tailored to suit the most discerning consumer.

The BMW 7-Series is one of three vehicles making both this list and 2016 Wards 10 Best Interiors (along with Pacifica and RX) last spring.

The 750i was a shoo-in then and now, enchanting the editorial staff with seamless connectivity for phone and music and a personal tablet that can be removed from its cradle so second-row occupants can – among many other functions – change radio stations, spritz the cabin with perfume, get a massage and close or open windows, shades and sunroof.

While you’re away from your car and want to see an overhead map of its location, or find out how much gas is in the tank, an app on your smartphone can tell you.

Expensive? Yes, but the 7-Series user experience, in just about any trim level, will outgun many exotics or luxury cruisers two or three times the price. The iDrive controller works well, and the amount of information at the driver’s fingertips is staggering. And it has one of the coolest fobs ever.

While the 7-Series coddles adults, the Pacifica treats occupants of all ages, especially the young, like royalty. This vehicle has seven USB ports (a record perhaps?), it understands and correctly processes simple voice commands and it can park itself (both parallel and perpendicular). Phone pairing is straightforward and near instantaneous, and text messages can be dictated by voice.

Dials are big, some controls are redundant, and the large pinch-able UConnect touchscreen can be configured with a driver’s favorite apps or functions for quick access, which will be appreciated by frazzled parents.

In the second row, climate controls are easily within reach, and the two huge display screens are loaded with enough games, media and information to keep a bored child from ever asking once again, “Are we there yet?,” no matter how long the road trip.

The display screens are big enough for third-row occupants to see, making the family-friendly Pacifica a rolling entertainment center.

The Ford Escape proves that a great user experience need not cost a fortune. This stylish, functional 5-passenger ute can be had for under $36,000 fully loaded with adaptive cruise control, park assist, lane-keeping, illuminated USB port and an 8-in. (20-cm) touchscreen that provides easy access to the wonderfully capable Sync infotainment system.

Recognizing the importance of consumer electronics, the Escape connects with Apple CarPlay and Android Auto, allowing smartphone users to access their music apps, make calls and get directions by voice or through the vehicle touchscreen, without ever handling the phone.

Want to find, reserve and pay for a parking spot before leaving your house? The new Escape comes available with FordPass, a smartphone app connecting you virtually to the vehicle, as well as loads of information and functionality.

Don’t forget the ability to open the liftgate by wagging a foot under the rear bumper. Anyone who does a lot of shopping might find this the most valuable user experience of all.

General Motors had three entries that scored well, particularly for quick phone connectivity: the GMC Acadia, Cadillac CT6 and Chevrolet Malibu Hybrid. But it’s the Acadia that earns the nod by checking all the boxes on our scoresheet.

This 5-passenger premium CUV is both sophisticated, with a WiFi hotspot easily accessed and split-screen weather report for your current location and eventual destination, as well as our favorite standby: buttons and knobs arrayed prominently in the center stack. These allow the driver to simply toggle between radio or media options and to search for music.

But a vehicle can’t win recognition in this competition by being too old-school. The Acadia also has an intuitive touchscreen that is navigated effortlessly, and voice controls work great, too.

Plus, the CUV gets top scores for a radar-based ACC system that functions autonomously as if an attentive human is at the pedals, slowing down based on the speed of the lead vehicle and then creeping up on the stopped car to close the gap.

Pickup truck buyers can be a fickle bunch, but the second-generation Honda Ridgeline manages to instill enough rugged functionality while baking in user-experience features that make this midsize truck fresh, techy, upscale and comfortable for both casual consumers and crews on the job site.

The innovative audio technology that turns the Ridgeline’s bed into a giant speaker – ideal for tailgating – is arguably this year’s finest example of a “surprise and delight” highlight.

For those wanting to use autonomous driving features, the Ridgeline has adaptive cruise control that will apply the brakes down to 20 mph (32 km/h), then notify the driver to take over.

The camera-based lane-keeping system works well, and you can adjust the sensitivity as you veer toward lane markers. In those cases, the vehicle provides a gentle tugging of the steering wheel to alert the driver, pulling you back into your lane, and there is no beeping to alert passengers that you’re an inattentive driver.

Hyundai’s all-new Genesis G90 is an impressive luxury car, but its Elantra, priced much lower, demonstrates how an entry-level vehicle can be every bit as appealing to technology-minded buyers.

Among compact cars, there are few entries offering ACC that will creep the vehicle through traffic without a foot on the brake pedal, and bring the vehicle to a near stop, while steering itself within the lane. It also offers automatic emergency braking with pedestrian protection. A number of more expensive vehicles in the competition did not have this level of functionality.

But other creature comforts distinguish the Elantra as well: HID headlamps with Dynamic Bending Light, Android Auto, Apple CarPlay and Clari-Fi technology to restore the crispness of compressed music files. And it will tell you how long it will take to get to work, even if you don’t ask.

This level of sophistication illustrates how the user experience is fast becoming the great equalizer, using the latest electronics to make economy cars supremely intelligent. Without question, the Elantra was the value leader in this year’s competition.

The Infiniti Q50 enhances the user experience, thanks to upgrades included in the refreshed ’16 model, including rear cross-traffic alert, forward emergency braking and Around View Monitor that also detects moving objects.

Once behind the wheel of the Q50, the driver’s eye is drawn to the two touch-capacitive color screens, one atop the other in the center stack. Brilliantly lit, these full-color displays contain menus that are easy to navigate for a customized experience. Likewise, the gauges in the instrument cluster are warmly lit, and brightness is simple to adjust.

Infiniti’s InTouch telematics system provides effortless phone pairing and a wealth of information, such as real-time weather and traffic reports, and there are multiple ways to access all of it. Learn a couple key words, and the voice controls work flawlessly.

The Q50 is inching toward autonomy, too, able to steer itself and safely trail a lead vehicle on the highway for several miles without driver involvement.

Lexus has a knack for designing quiet, comfortable vehicles, and one editor describes the new RX CUV as a “calm connection to an otherwise busy world.”

That means trouble-free smartphone pairing, an outstanding color head-up display (easy to see even in bright sunlight), detailed maps and multiple ways to access menus and information, including an ergonomic palm-rest and joystick that, once learned and adjusted for a driver’s preference, becomes second nature. Commands are acted upon quickly.

For those who prefer conventional methods of interaction, the premium switchgear is very smooth to the touch.

The connection to the outside world comes in another important way, as all-speed radar cruise control is excellent, bringing the RX to a complete stop behind a lead vehicle. In traffic, it creeps ahead to close the gap without sudden braking or acceleration. Lane-keeping also works well, and warning cues are reasonable without annoying.

Billed as Mercedes-Benz’s most advanced vehicle, the ’17 E-Class can park parallel or perpendicular, change lanes and steer, brake and accelerate in traffic without driver intervention. It can charge a smartphone without a wire and protect occupants’ ears (by generating white noise) in the event of a severe collision or airbag deployment. Pages and pages of menu options can be viewed in high-resolution animated color on two massive 12.3-in. (31-cm) reconfigurable display screens that manage to remain uncluttered.

Touch-sensitive control buttons on the right and left sides of the steering wheel can be swiped up or down, allowing the driver to access infotainment options with hands on the wheel.

And there’s more to come, such as Car-to-X ability to communicate with other vehicles and traffic lights, as well as remote parking pilot, allowing the owner to remotely summon the car from garages and tight parking spaces using a smartphone app.

Most surprising is that this world-class sedan comes equipped with most of these features for $73,000, while some less-impressive rivals cost more.

WardsAuto editors evaluated the 29 nominees during their routine daily commutes in Metro Detroit and scored each vehicle based on several key criteria:

How user-friendly and intuitive are the controls? If the vehicle has an onboard navigation system, how simple is it to use? Are the displays easily reconfigured? Is the system compatible with streaming music apps, real-time traffic and weather reports, as well as Apple Car Play and Android Auto? Is it easy to get emails and text messages on the display screen or even read to the driver?

Winner profiles will appear on WardsAuto.com beginning Sept. 21, and honored automakers will receive their trophies on Oct. 4 at the WardsAuto User Experience Conference at the Suburban Collection Showplace in Novi, MI.