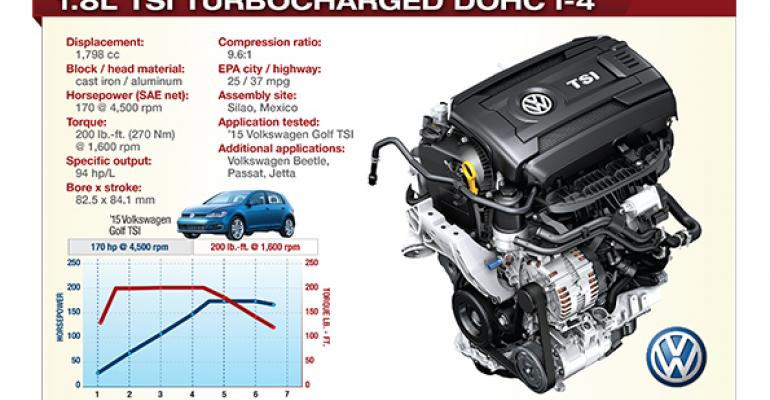 <p><strong>The 1.8L TSI is so responsive from as low as 2,000 rpm that its transmission&rsquo;s gears can be taller, and it can shift into higher gears more quickly from low rpms.</strong></p>
Vehicles

WardsAuto judges laud both its fuel efficiency and performance &ndash; especially its surprising torque at low rpms &ndash; and its availability in affordable vehicles.

Editor’s Note: Ward’s 10 Best Engines competition has recognized outstanding powertrains for 21 years. This installment of the series analyzing last year's choices looks at the development of Volkswagen’s 1.8L gasoline-powered I-4.

WardsAuto hasn’t put a version of VW’s now infamous 2.0L diesel engine on the 10 Best Engines list since 2011. In recent years, editors believed VW's gasoline engines were better. VW is returning the diesel awards for 2009, 2010 and 2011.

Gasoline engines are not involved in VW’s current emissions cheating scandal, but we have elected not to include this engine or any other VW and Audi powertrains in the 10 Best Engines program until further notice.

The latest version of Volkswagen’s 1.8L TSI turbocharged DOHC I-4 arrived in 2012 boasting a liquid-cooled exhaust manifold integrated into its cylinder head. VW says that was a first for any turbocharged 4-cyl. engine.

Turbocharged I-4s have proliferated throughout the industry as replacements for larger displacement 4-, 5- and 6-cyl. engines, offering higher fuel efficiency and similar or better performance. Most today feature direct gasoline injection, but one characteristic that differentiates this family, known as EA888, from most others is its modularity.

“This is a big engine family, from the 1.8L turbo up to the high-power 2.0L turbo in the Golf R,” says Marcel Zirwes, product manager-Powertrain, VW of America. (Zirwes was interviewed several weeks before the VW diesel emissions scandal broke).

The engines are more costly than naturally aspirated I-4s because they all are turbocharged. “Turbocharging is a big step in technology and fuel efficiency,” Zirwes says, “but good value for the customer. And this engine is very flexible. The low version has a cost efficiency advantage over most competitors, and higher versions have more technologies. It’s a toolbox that enables us to do a lot of different things depending on the vehicle, the segment, customer expectations and what they are willing to pay.”

The base 2.0L, for example, has just two valves per cylinder, while the 1.8L Turbo has 16 valves and intake-side variable-valve timing. The GTI’s 16-valve 2.0L Turbo has VVC on intake and exhaust sides, plus variable valve lift.

WardsAuto judges laud both its fuel efficiency and its performance – especially its surprising torque at low rpms – and its availability in affordable vehicles.

Compared with the award-winning 1.8L editors tested last year in a ’14 VW Jetta, the ’15 version “achieves the same peak 170 hp 300 rpm earlier, and the most noticeable improvement is an extra 16 lb.-ft. (22 Nm) of torque, said editor Christie Schweinsberg, adding that it is “remarkably vibration-free.”

Among the engineering team’s toughest challenges was achieving the needed balance of affordability, light weight and efficiency for the volume version of the 1.8L and durability for the 292-hp 2.0L version in the high-performance Golf R.

Additional cost and weight were saved through materials choices and clever design. For example, both the oil pump and the intake manifold are plastic, and the balance shafts also drive the water pump.

All U.S.-market engines have to meet not just current standards but also further emissions reductions mandated between now and 2025, when OEM fleets must average a “Super Low Emissions Vehicle” level of 30 mg of hydrocarbons per mile, or SULEV 30.

“The EA888 is already doing SULEV 30 in some states,” Zirwes says. “We can roll it out and be emissions-compliant in 2025. The concept of ever-higher emissions is a matter of cost, and because of the cost, everyone is doing it only as necessary. You have to invest first in new and high-volume engines, looking for cost-efficient ways to charge customers as little as possible,” he says.

“We have a lot of experience with turbocharged engines in other markets. The challenge as we are rolling them out in North America is the cost, because customers here in this segment are so cost-sensitive. We have to understand which engines to change at what times and, as the level of technical development improves, keep the balance between emissions, cost and customer satisfaction.”

While turbocharged engines once were all about performance, they have become much more fuel-efficient in recent years, and most also have improved in low-rpm responsiveness. Zirwes says this 1.8L TSI is so responsive from as low as 2,000 rpm that its transmission’s gears can be taller, and it can shift into higher gears more quickly from low RPM.

That is good for both fuel efficiency and driving satisfaction.

“Customers were asking for that when gasoline was $4 a gallon,” Zirwes says. “But now we have the big problem that customers already have very good fuel economy and are not asking for more. So what the legislation is demanding is incredibly hard. We have to focus heavily on fuel economy in coming years, but with measures that customers are willing to pay for.”

Improvements in the next-generation of this family likely will include even more friction-reduction measures. Other possibilities include a water pump that only is used when needed and a flexible oil pump that has different stages. These features already are available in more expensive versions of the engine.

Zirwes adds that VW’s stop/start technology is ready for the engine and the company is doing market studies on customer acceptance. “We will need a bigger battery and a more refined and heavier-duty starter to withstand more starting events, which means better materials. That adds both cost and weight.

“The huge challenge is that we are legislation-driven but still have to focus on the customers who are buying our cars.”