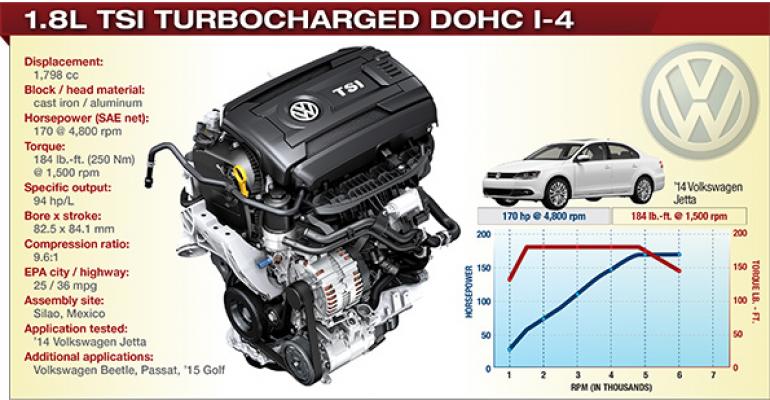 VW&rsquo;s third-generation EA888 I-4 is a modularized masterpiece that plays many roles well.&nbsp;

Ward’s 10 Best Engines competition has recognized outstanding powertrains for 20 years. This installment of the 2014 Behind the 10 Best Engines series looks at the development of VW’s 1.8L TSI turbocharged DOHC 4-cyl.

“If you look at the history of Volkswagen Group direct-injected turbocharged engines,” says VW of America Engineering and Environmental Office general manager Oliver Schmidt, “we basically took an engine we already had and applied that technology to it. But that engine was very expensive.”

Hence that fourth major goal: Remove as much cost as possible from the new design. At the initial meeting, “they wrote a number on the board that was 25% below the cost of the previous engine, and everybody was saying, ‘You’re crazy! We’ll never achieve that.’ But I can tell you right now that we are more than €200 ($260) below that number.”

VW was able to source all of the major components in North America, many in Mexico, which it was unable to do in the past, and builds its U.S.-market engines at its new Silao, Mexico, plant. Because both technologies are becoming mainstream, the price of direct-injection and turbocharging systems are coming down, Schmidt says.

Still, that aggressive cost target posed a major challenge. “We wanted high horsepower (for the top-level 2.0L version), yet we needed to get its cost way down from where it used to be. There was a lot of integration, along with specific component cost savings.” Both cost and weight were saved through clever choices of materials. The oil pump and intake manifold are plastic. The balance shafts also drive the water pump.

Nearly every automaker has turbocharged I-4s today and many feature direct injection. What sets this one apart is its modularity, Schmidt says.

It is part of a family of engines with 1.8L and 2.0L displacements and few internal differences between low-, medium- and high-end versions. “The entry-level engine is in the Jetta; the medium engine is in the U.S. Golf and the high-end 2.0L version with everything we can put on it is in the Audi A3,” he says. “We can add on or take off parts depending on where we are in the world and what we need.”

This is the third generation of VW’s EA888 turbocharged, direct-injected I-4 engine. Launched in 2006, the first generation is the 2.0L still in the VW Eos, CC, Tiguan and base Jetta. The 2009 second generation was available in the U.S. only in Audis, not in transverse-engine VWs. This third generation arrived two years ago boasting a first for a turbocharged engine: a liquid-cooled exhaust manifold integrated into the cylinder head.

“This gives us the huge advantage that we don’t need to use fuel any more to cool the exhaust temperatures at high loads,” Schmidt says. “We can do it now with the cooling system.”

Some naturally aspirated engines had integrated exhaust manifolds at the time, he points out, but no turbocharged engines. “We were first with that technology when we launched these engines with the new MQB platform in Germany. We launched it on all our engine families, and now everybody is doing it because it just makes sense.”

Even with variable cam timing only on the intake side, this new 1.8L is substantially more fuel-efficient than its 2.5L naturally aspirated I-5 predecessor and the previous 1.8L not sold in the U.S. And its emissions also are much lower.

The team’s other challenge, according to Schmidt, was achieving the needed balance between fuel efficiency for the volume 1.8L and durability for the potent 2.0L version. “For example, you can reduce friction by reducing the diameter of the oil bearings, but they still need to withstand all that power,” he says.

Refinement clearly was another goal. This “latest offering from VW sets a new refinement benchmark for small-displacement engines with forced induction,” wrote one WardsAuto editor.

Light weight also was a major consideration. Even though the block is made of conventional cast iron, the entire engine weighs just 290 lb. (132 kg) thanks to a new and lighter assembly that integrates the turbocharger, cylinder head and exhaust manifold; a casting process that allows cylinder walls as thin as 0.12 ins. (3.048 mm); smaller-diameter main bearings; four (instead of eight) crankshaft counterweights and lightweight materials throughout.

Schmidt adds that its ramp-up and launch was one of the smoothest VW has ever seen. “We had a pretty clever launch plan,” he says, “and no issues. We first launched it as a 2.0L in the old platforms, starting with the New Beetle, and didn’t advertise the higher power. If we had encountered any problems, we could have switched back to the old engines, but we didn’t. Then we followed with the Jetta, and now the 1.8L in the Jetta, Beetle, Passat and ’15 Golf.”

Despite all the progress engineers have made, more efficiency improvements are possible in the future without sacrificing performance, Schmidt says. Electrification of accessories (beyond the current electric power-steering pump) is a possibility, along with vehicle weight reductions.

“With the Golf,” he says, “we made a huge step in lightweighting. Its MQB platform is about 100 kg (220 lbs.) lighter than its predecessor. And with lighter vehicles, you can downsize the engine even more, maybe from 1.8L to 1.4L, and achieve the same performance with less power.”

He also hints about something we may see from VW Group farther down the road.

“If you search the Internet, you’ll find something very interesting for which Audi recently applied for a patent: variable compression ratio,” Schmidt says. “It’s basically an off-center crankshaft driven by a cam that manipulates the stroke. That is one of the things we’re looking at.”