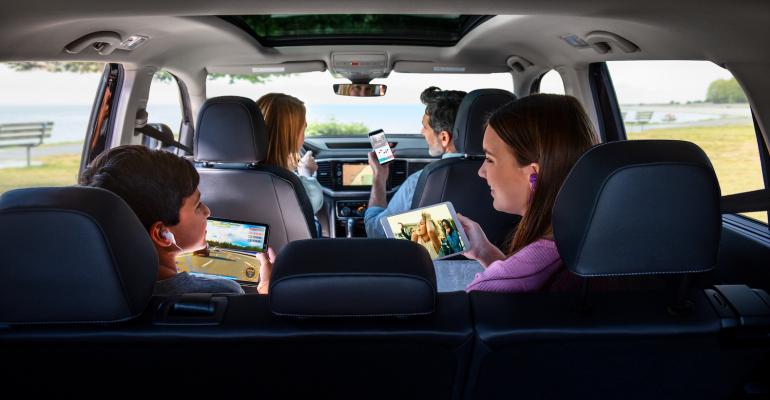 ANN ARBOR, MI – Automakers continue to look for new revenue streams beyond selling vehicles, and Volkswagen is no exception.

Six years after launching the first generation of its connectivity and convenience technology, Volkwagen of America is rolling out a faster, more featured, less expensive version of its Car-Net telematics service.

VW won’t share data on what percentage of buyers of ’14-’19 model-year vehicles with the first-gen of Car-Net opted for the service, but it says it wants to increase the take-rate with the new generation.

“We’re excited about the product because it’s a significant upgrade to what we currently have in market,” Frank Weith, director-connected services for Volkswagen of America, tells media Sept. 17 at a briefing here.

The second-gen of Car-Net, available on ’20 model-year VWs in the U.S., barring the eGolf and a “few hundred” early builds of the Passat, will offer five years of free remote-access features. The features, accessible via an app (pic below), include not only remote start, locking and unlocking the vehicle, checking its status and its maintenance needs, but also so-called teen driver alerts (curfew, boundary, speed), as well as the ability to search and send destinations to the vehicle.

Because Car-Net now is available on all trim levels for ’20, as opposed to just high-end grades with its first generation, remote start may need to be installed at port or a dealership on lower-grade vehicles, Weith says.

And while access to most ’20 VWs’ new 4G LTE WiFi hotspot initially will be through Verizon (a 1-month free trial is being offered), VW also will be partnering with T-Mobile in 2020 and is in talks with other carriers so customers can add a data plan for the vehicle with their existing carrier.

“Once they choose their carrier, which typically is going to be the one they already have an agreement with for all their other devices, the car is now truly another device,” Weith says.

Weith believes this so-called “Carrier of Choice” option will “be an influence on the industry and the way consumers think about data.” Today, most in-vehicle WiFi plans are via just one carrier of the automaker's choosing.

Weith says if a vehicle is sold, VW can swap the carrier to the new owner’s carrier of choice via an over-the-air software update.

Falling under added features of the second generation of Car-Net is DriveView, which, if a driver opts in, allows them to share a driving score generated by VW with their insurance provider, similar to plug-in dongles used by insurers today to incentivize good driving behavior through lower rates.

“(Owners would) opt-in to share their driving score with insurance providers to see what kind of discounts they can get,” he says.

VW also plans to give the ability to its owners to put their vehicle into so-called peer-to-peer car-sharing fleets via a partner yet to be announced.

“For us what’s important is we’re now exposing VWs into other ecosystems. A customer puts their car somewhere where typically no one would even consider VW (and someone) may now have exposure to one…who knows? They may eventually go to the dealership and test-drive a car.”

In-vehicle parcel delivery, where a service can access a VW and leave a package in the trunk or cargo area, also is being explored.

Something not being looked at is a marketplace feature, similar to that offered on some General Motors vehicles, allowing drivers to buy food and beverages from the head unit.

“Not today, not on-screen or in-vehicle, but we’ll see what happens in the future,” Weith responds to a Wards inquiry on a marketplace-like feature. “As we evolve the in-vehicle technology and center stack, we could create our own marketplace. We haven’t really decided yet if we want to do that, but we’ll see. The capability is there.”

Thanks to an upgrade from a 3G to 4G module, and a new IoT platform, ’20 VWs also have Siri and Alexa integration. Demonstrated here for media, requests from an iPhone and an Amazon Echo speaker to a new ’20 Cross Sport CUV worked almost perfectly, minus one Siri mishap when “Where is my VW?” was said instead of “Where’s my VW?”

The new IoT platform also brings about faster response times to inquiries, Weith says, noting doors can be remotely locked and unlocked within 3-7 seconds vs. 20-30 seconds on current Car-Net-equipped ’19 models.

VW also announces it is debuting for the first time in the U.S. Traffic Jam Assist on a model, the ’20 Cross Sport. Functioning from 0-37 mph (60 km/h), it can bring the vehicle to a complete stop when adaptive cruise control with lane centering is turned on. The vehicle will resume on its own if a stop is under three seconds, similar to how the feature functions in Traffic Jam-equipped Audis, VW’s luxury brand. Unlike some Audis, there is no self-steering function with the feature.