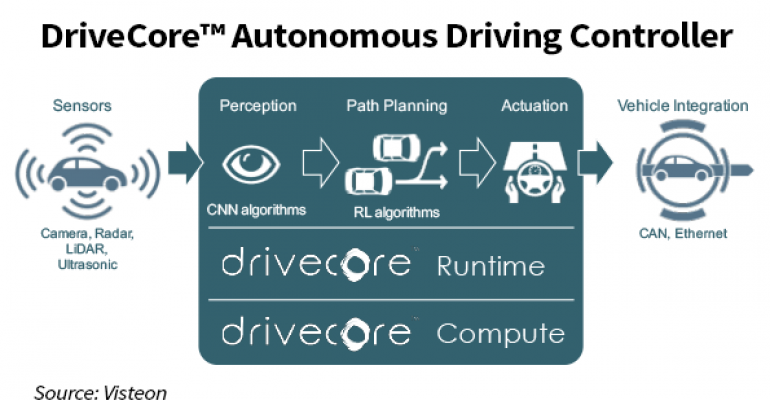 The supplier wants to become the autonomous-vehicle systems integrator for global automakers, using its new central domain controller as the centerpiece for the advanced technology.

Visteon puts its stake in the autonomous-vehicle ground, officially rolling out its DriveCore technology this week at CES 2018 in Las Vegas.

DriveCore is a central processor with proprietary software designed around the concept of sensor fusion. It takes data fed from multiple radar, lidar and vision sensors, processes it and uses aspects of artificial intelligence to determine the path forward for the autonomous vehicle.

“Where we saw the (business) opportunity, the white space (in the autonomous sector), is in the autonomous domain controller…that (can) perform sensor fusion of the data that is coming from these multiple sensors required for Level 3 or higher autonomous capabilities,” CEO Sachin Lawande tells WardsAuto in an interview ahead of DriveCore’s CES launch.

The processor is agnostic in terms of its ability to work with sensors and software provided by other suppliers. It doesn’t matter whose camera system, lidar or mapping software an OEM chooses to use, the DriveCore domain controller will work seamlessly, Visteon says.

“We’ve already started discussions with some OEMs, and the business model will likely be where we would play the role of systems integrator,” Lawande says. “We would provide components like DriveCore and integrate third-party technology into it to provide a complete solution.

“We would be the one that builds and tests the computing system, integrates it and makes it work with the vehicle in conjunction with the OEM’s engineering department.”

Visteon has been talking about DriveCore for some time, but it fully presented the technology to automakers only three months ago.

“We are talking to OEMs about 2020 launches, so we are pretty far along (toward commercialization),” Lawande says, declining to reveal potential customers. “The response has been very good.”

Other suppliers, including Aptiv (formerly Delphi), Continental, Bosch and Mentor Automotive, are on similar tracks with centralized controllers, but Visteon believes its approach offers some advantages.

“Based on what we can tell (from talking to OEMs), we seem to have a pretty unique solution in the industry today, so hopefully that will translate into some early wins,” Lawande says.

Soon to follow will be self-parking capability, where vehicles pilot themselves to designated lots and structures that are mapped and otherwise equipped to accommodate driverless vehicles.

“That’s the battlefront for all of us for the next two to three years,” he says. “We have the silicon capabilities to deliver that; we have the software capabilities. Now it’s really implementing it, testing it and getting that solution to be more robust.”

Capability to navigate city streets autonomously will come around 2025, although Lawande says more processing power will be needed. Full Level 5 autonomy isn’t likely much before 2030, he says, and another leap in chip capacity will be required.

“We have silicon today to do Level 3 in a very good way,” Lawande says. “But Level 4 probably is where (current DriveCore capability) will max out.

“There’s not a Level 5 capable hardware (available today),” he says of the current state of microprocessor computing power. “I would expect sometime in the 2025 timeframe we would have this capability in the labs, but it will take a little bit longer to introduce it to the market.”

DriveCore is scalable, incorporating only as much onboard computing power as needed depending on the sophistication of the sensors used and the autonomous-driving features offered.

“Because of the way our industry works, we have to offer scalability,” Lawande says. “We cannot insist that every car have the same level of sensors in terms of the accuracy, granularity and density of the information it provides.”

At the higher end of the computing scale, DriveCore will include a sophisticated liquid-cooling system to prevent the unit from overheating.

“The automotive industry has never packed as much processing power in the car as they are about to get into,” Lawande says, noting the device will be able to use silicon from a variety of producers, including NVIDIA, Qualcomm, Freescale and, ultimately Intel and others.

The Visteon CEO puts initial Level 3 costs at about $2,000 for OEMs, with about half of going to pay for four lidar sensors needed and the rest for the DriveCore central processor.

“And from that point I expect it to come down pretty rapidly, to as much as a half within three years of that, mainly driven by unit volume,” he says.

Visteon will look at acquisitions as a way to further solidify its position in the autonomous-vehicle sector, but Lawande says the company will move cautiously.

“I think it is a little early to be on a (mergers and acquisition) track here, because of the very early-stage nature of some of the technologies, especially on algorithms and sensors,” he says. “We will wait for the dust to settle down a bit. And at that time we will be in a much better position to pick the likely winners from losers.

“We think this is a long race, not a short sprint. And we have enough capabilities on our own to deliver unique value and create a space for ourselves in the value chain like we are with DriveCore. So we don’t feel that we have to buy our way into the business.”