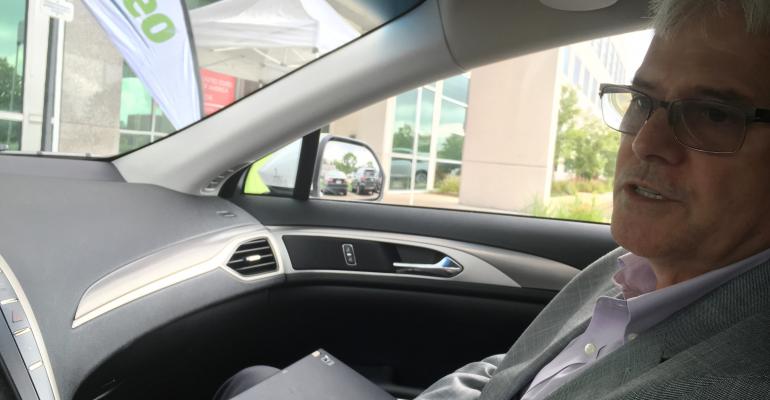 Valeo&rsquo;s 48V system, which is underpinned by the French supplier&rsquo;s electric supercharger, makes its debut this year on the redesigned Audi SQ7 high-performance large SUV.

TROY, MI – A movement to 48V technology is gaining momentum as automakers seek a practical path to meeting tightening global fuel-economy and tailpipe-emissions rules, and Valeo is leading the charge as the first supplier to commercially deploy the light-electrification strategy.

“Fuel economy can be a tough sell,” Vint tells WardsAuto during an interview at the supplier’s North American headquarters here. “Consumers do not want to pay for it. But 48V adds in the fun-to-drive (element).”

But the SUV is relatively efficient for those performance numbers at 31.8 mpg (7.4 L/100 km) in the new European Driving Cycle with carbon-dioxide emissions of 194 g/km. Part of the emissions story is the engine’s displacement reduction of 0.2L, a downsizing enabled by the electric power punch of 48V.

Vint says future regulatory regimes and a need for automakers to keep highly desirable and profitable cars such as the SQ7 in showrooms form a positive outlook for 48V systems. Third-party data estimates penetration of the technology, which can cost 30% less than high-voltage hybrid systems, to 5.5 million vehicles worldwide in 2021 and 13.6 million in 2026.

“We expect our (48V) business to grow dramatically,” Vint says, noting additional OEM customers for the technology will be announced soon. “We lead the market.”

But other suppliers with global might on par with Valeo, such as Continental, Delphi and Bosch, also are bullish on 48V technology, which in a powertrain typically involves swapping out an engine’s traditional alternator for a motor-generator backed by a small lithium-ion battery. The system does not replace the vehicle’s 12V electrical architecture or its lead-acid battery; instead, it provides power to other vehicle systems such as an electric supercharger. It can also power variable suspension technologies and heating, cooling and other comfort and convenience options.

However, its first iterations are predominately for efficiency-gaining stop-start systems, which when mated to Li-ion battery power can provide smoother, more seamless and driver-friendly stop-start performance than a 12V system alone. Stop-start boosts efficiency between 5% and 15% depending on the extent of the application.

​Valeo currently is demonstrating those gains to OEMs with a Lincoln MKZ outfitted with its proprietary electric supercharger, a 48V belt-starter-generator, high-efficiency DC/DC converter, 48V controller, torque converter, requisite sensors and an A123 Systems-sourced Li-on battery.

A quick test drive in the MKZ shows how Valeo’s electric supercharger provides abundant torque at low rpm, as well as well quick, quiet engagement of the torque convertor and sailing with the engine off at certain times during highway cruising.

But as a supplier of a broad range of powertrain technologies designed to improve fuel economy and curb emissions, Valeo is marketing an entire suite of 12V and 48V systems to electrify vehicle components.

Vint says Valeo also brings integration expertise to the 48V puzzle. “The key is system optimization, and Valeo’s role is supporting the OEMs.”

Vint declines to estimate the cost of the system outfitted in the MKZ demonstrator because it is exclusively for testing by OEMs, and he says the supplier continues to compile data before stating efficiency gains from the car.