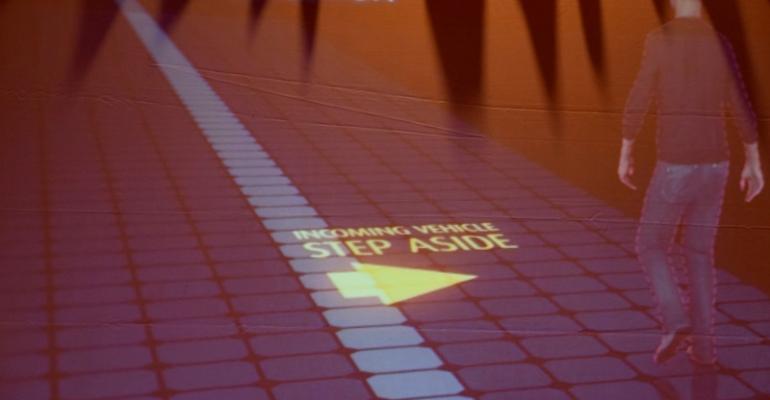 The supplier can use headlamps to project warnings along the edge of road surfaces to pedestrians at night. The technology is another step toward smarter vehicles that ultimately will be able to drive themselves, Valeo says.

LAS VEGAS – Lots of automotive component producers are engaged in the emerging sector of active-safety technology as a way to prevent collisions, but few of them also are in the headlight business.

French supplier Valeo wants to use cameras and sensors to identify a pedestrian walking along the shoulder of a road at night and then project a message warning the person to stay right and out of the roadway.

The technology, presented this week at the Consumer Electronics Show here, is an extension of Valeo’s long-established expertise in lighting, says Jean-François Tarabbia, the supplier’s senior vice president-research, development and product marketing.

The first step for the technology is to spot a pedestrian walking along the road. Cameras and sensors are able to identify the line between the road and shoulder, Tarabbia says.

Valeo’s latest headlamps can provide forward illumination while projecting light bars on the ground to remind the pedestrian where the road begins. The system can project a warning onto the ground in front of the pedestrian, such as “Oncoming vehicle – step aside.”

With the edge of the road identified, the system also can warn the driver to stay left in avoiding the pedestrian – a device that could be helpful for drowsy drivers at night.

This good idea could be even better if deer and small critters could read, or at least be scared away from the road by images cast on the ground by Valeo’s headlamp system.

Tarabbia sees the safety technology as one more step toward smart vehicles that ultimately will be capable of driving themselves.

“The car is now able to sense, to communicate, to learn and to act on its own autonomously,” he says.

Vehicles have gotten a lot smarter over the past 20 years, as demonstrated by Valeo’s product portfolio. It has produced 400 million ultrasonic sensors mounted in rear bumpers to detect obstacles and provide a warning to a driver backing up.

Since 2006, Valeo has produced 10 million automated parking systems that will detect an open curbside space and then back the vehicle into the spot without the driver ever touching the steering wheel.

At CES this week, Valeo unveils its Bluetooth-based InBlue technology, which allows smartphones to play a key role in entering and starting the vehicle. The smartphone communicates with the vehicle using a virtual key stored in the phone.

InBlue also can make it a lot easier to lend someone a vehicle. A vehicle owner with a smartphone can simply transmit the key remotely at any time to the person who will borrow the car. The person receiving the virtual key will be authorized to use his or her smartphone to unlock, lock and start the vehicle.

Think of the implications for automotive dealers, car rental companies and fleet managers.

On the autonomous front, Valeo demonstrated at last year’s CES the Valet Park4U concept, which allows a vehicle to find its own parking space, without a driver behind the wheel.

This year at CES, Valeo demonstrates its Cruise4U automated driving prototype, which uses Valeo’s SCALA laser scanner to provide a wide field of view while surveying the road ahead with great accuracy. The system can take full control of steering, acceleration and braking.

Valeo’s partner for the system, IAV, demonstrated the technology last fall on Detroit highways during the Convergence automotive electronics conference.