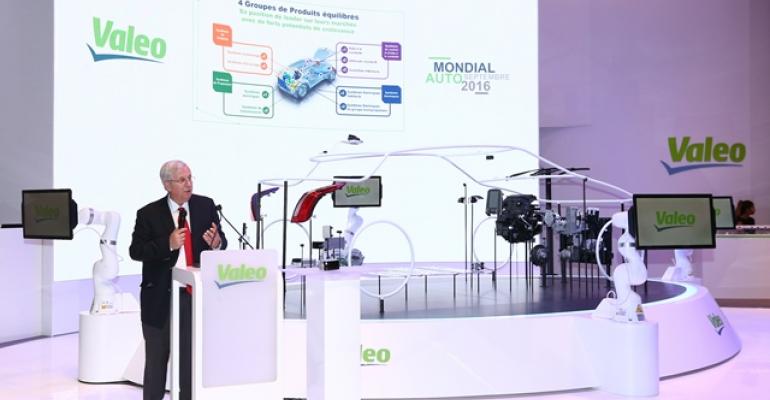 The company has spent the past few years aggressively stretching its product portfolio into the most desirable, revenue-rich segments of electrification, connectivity and autonomous driving technology.

PARIS – French supplier Valeo revs its innovation engine at the Paris auto show, hoping to catch the attention of automakers seeking solutions to tightening global fuel-economy and emissions rules and an affordable fast track to the autonomous age.

The central message: Valeo today is more technical, innovative and profitable than its history of selling relatively low-cost commodity parts such as wiper blades and engine alternators might suggest. The company has spent the past few years aggressively stretching its product portfolio into the most desirable, revenue-rich segments of electrification, connectivity and autonomous-driving technology, says Valeo Chairman and CEO Jacques Aschenbroich.

“We are at the core of these revolutions,” he proclaims from the supplier’s show stand, just a stone’s throw from major customers such as PSA Group and Renault-Nissan.

It’s a bit of a sea change for the 93-year-old supplier. Brakes, thermal systems, lighting and wiring harnesses were the core of its business for most of those decades. But it has pushed into electronics that make engines run cleaner and serve as the backbone for advanced driver-assistance systems.

The company has grown its product portfolio both organically and through targeted acquisitions, such as its turning-point purchase of Johnson Controls’ automotive electronics unit in 2005.

It also took early advantage of China’s automotive boom, establishing a manufacturing footprint there in 2013 and reaping a string of twofold increases in sales. It now operates in 32 countries with 88,800 employees, 148 production sites and a combined 53 R&D facilities.

“All of our efforts (are) fruitful,” Aschenbroich says.

The start-small, think-big and scale-fast strategy has thrust Aschenbroich to rock-star status in the business world. He was named to the Best Performing CEOs in the World list by the Harvard Business Review in 2014 and last year was declared Man of the Year by the influential French magazine Journal de l’Automobile.

On the floor of the Porte de Versailles exhibition hall here, his local celebrity is evidenced by a throng of French journalists on his coattails, a sight not unlike the media gaggles following General Motors CEO Mary Barra or Alan Mulally during his time as head of Ford.

While Valeo’s ascent indeed has been sharp in recent years, it remains dwarfed by other multinational suppliers vying for technical leadership in tomorrow’s transportation world. Rival Continental, for example, boasts a market capitalization of €36.77 billion ($40.6 billion) compared with Valeo’s €12 billion ($13.3 billion).

Its capacity to fund capital-intensive R&D sectors such as powertrain, connectivity and autonomy is Valeo’s one weakness, says Matteo Fini, senior manager-Automotive Supplier Solutions at consultant IHS in London.

“They don’t have the scale of a Conti or a Bosch,” he says. “That is something that means a lot when you are playing with R&D budgets. Size matters.”

Valeo invests 10.4% of its OEM revenue back into R&D. It is sizable annual capital spending relative to the company’s market cap, although 13% of the supplier’s overall business is aftermarket.

“But they are in the right product lines,” Fini adds, citing Valeo’s lighting unit as an overlooked gem in the company. Fini forecasts LED penetration to grow to 30% of the lighting market by 2021 as it trickles down from luxury and large-car segments to B- and C-segment vehicles.

Valeo’s climate-controls unit also has been accelerating, capped at the show here with the announcement of a €1 billion ($1.1 billion) contract with Volkswagen. Fini points to Aschenbroich’s leadership as a key element in inking the VW deal.

“He’s been leading a lot of change,” Fini says. “All of these (product-line) investments have proved to be the right ones.”

Valeo, however, has pinned its future on autonomy. Its Cruise4U technology prototype hit the streets here during the show’s press week with fully automated loops around the city’s Boulevard Périphérique, or “Ring Road.” The car assumed all steering, acceleration and braking duties along the 4-lane, 70-km/h (45-mph) route of mixed-use traffic.

“Everyone wants autonomy,” says Jean François Tarabbia, senior vice president-R&D and product marketing at Valeo. “But why Valeo? Because Valeo has mastered sensors, the key to autonomous cars. Only Valeo has a sensor portfolio this vast.”

“So these aren’t results from a lab but from real life,” says Tarabbia. “It’s flexible, it’s safe (and) it’s comfortable.”

Expect more stateside activity in the future, as the supplier’s North American unit received permission from California regulators to test the technology on public roads. Just a handful of companies have the authority to conduct real-world testing in the U.S.

Valeo has stepped up its expertise in machine learning, too, targeting the rollout of technologies that not only adapt to an owner’s habits but also will determine if they are warm or cold, running on time or in a rush.

“Respecting all speed limits,” Tarabbia adds coyly. “The more the car is driven, the more it will understand you.”

Valeo expects autonomous driving to take two paths: One track will see self-driving develop progressively among OEMs, broadening from specific situations such as parking to full autonomy on the open road.

Another track to full autonomy will occur more quickly among fixed modes of transit such as taxis, buses and commercial trucks, where autonomous functions can be shut down if necessary. That self-driving technology is available today, but Valeo expects it will be 2030 or 2040 before the two pathways converge.

“And the beauty of it for Valeo is that we will be in both worlds,” says Valeo Chief Operating Officer Christophe Périllat-Piratoine.

Related to that activity, Valeo and French consultant and global outsourcer Capgemini have combined to develop Mov’InBlue, a smart-key technology for corporate fleet operators and rental-car companies. A virtual key for car-sharing, the technology permits locking and unlocking vehicles in difficult environments, such as underground garages, and also harvests real-time vehicle data.

Valeo also takes advantage of the Paris show to display its driver-monitoring technology, a dash-fitted camera pointed at the driver that detects lapses in concentration. It can alert the driver to pay closer attention.

Part of the supplier’s Hybrid4All powertrain offerings, e4Sport builds off Valeo’s established expertise in 48V technology with increased engine torque; maximized power under acceleration with an electric supercharger; a full electric power mode; and an electric-rear-axle for all-wheel-drive traction in low-grip situations.

“Electrification is not one product,” Tarabbia says. Many solutions are necessary to help OEMs meet future regulations, he says, from low-power boosts from belt-alternator-starter systems to high-voltage systems with 60V and higher power thresholds.

A newly created JV with the German industrial group Siemens targets the development of high-voltage powertrains for hybrid, plug-in hybrid and fully electric vehicles. The 50/50 JV is expected to begin operations later this year and encompass the work of 700 employees. Financial details were not disclosed.

A final piece of technology at the Valeo booth highlights the supplier’s work around next-generation lighting. High-definition and kinetic lighting systems facilitate communication between vehicles in automated-driving modes by using the headlamps and rear lamps to project or display images in certain situations to improve safety.

Valeo bundles all of its recent activities together with a new advertising campaign, called “Smarter cars need smart people,” primarily targeting engineers. A six-country effort, the campaign launches alongside the auto show with ads appearing in media such as Die Zeit, The New York Times and The Times of India. Short videos air on LinkedIn, Facebook and YouTube.

The campaign seeks to increase general awareness of Valeo and attract new talent to the company.