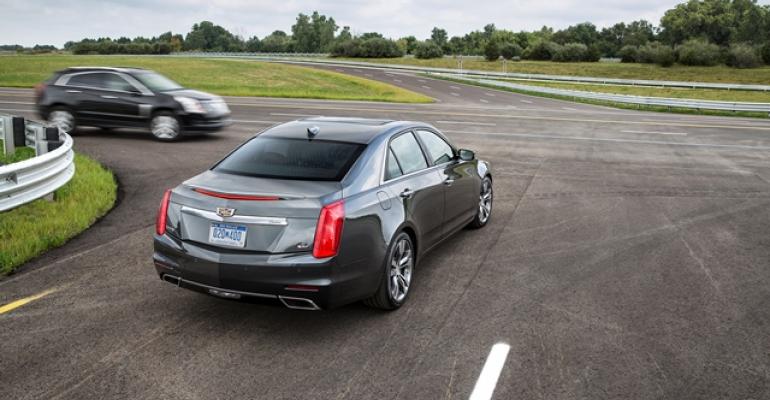 There are some sticky issues to be ironed out, most notably whether the 5.9 GHz band set aside by Congress in 1999 for V2V transmissions still will have room.

U.S. traffic-safety regulators unveil a proposed rule targeting the rollout of vehicle-to-vehicle communications technology, a requirement that if approved could cost automakers billions of dollars annually to implement.

However, V2V also could eliminate or reduce the severity of 80% of non-impaired light-vehicle crashes annually, says NHTSA Administrator Mark Rosekind. Upwards of 1,082 lives could be saved annually.

“That kind of potential is something we have to do everything we can to realize,” Rosekind says in a conference call with journalists to announce the proposed rulemaking.

According to the U.S. Department of Transportation research, a peak annual cost of $6.4 billion could occur sometime between 2020 and 2024, although that figure could be as low as $1.1 billion. On a per-car basis, V2V would cost $341-$350 in 2016 dollars and could fall to $209-$227 by 2058 as automakers become more familiar with the technology and it gains volume deployment.

The proposal calls for an estimated 5-year rollout of the rule, with one year dedicated to writing the final regulation and another two years to installing it on half of all new light vehicles produced. Two years after that, regulators would expect full deployment.

Widespread V2V would allow vehicles to “talk” with each other using short-range communication technology to avoid crashes. V2V could alert a driver turning left of another vehicle approaching from the opposite direction, or warn him if it is not safe to enter an intersection because of a high probability of crash.

“The potential applications of V2V are many,” USDOT Secretary Anthony Foxx says.

The proposed rule contemplates privacy issues and cybersecurity, the officials say, because information sent between vehicles does not identify anyone and messages contain only safety data such as location, speed, direction and braking status.

But there are some sticky issues to be ironed out, most notably whether the 5.9 GHz band set aside by Congress in 1999 for V2V transmissions still will have room. High-speed Internet providers are pushing for a bigger chunk, while automakers want to retain their share for V2V. The Federal Communications Commission, which backs the stance of telecommunications companies, and pro-automaker NHTSA are testing an idea of shared use.

“Our main question about spectrum sharing is whether it is safe, and hopefully this testing will be definitive enough to give us an answer to that question,” Foxx says.

If it is safe, he adds, DOT would have no objection to sharing. If it is not, the agency prefers a protected spectrum without access Internet providers. Or perhaps an alternative to V2V, which has been criticized as antiquated although automakers such as General Motors and Toyota are rolling it out, will emerge.

“We are leaving room for the manufacturing and technology communities to offer up a solution they think would accomplish the same objective. Our ultimate goal is to save lives,” Foxx says.

The incoming Trump Admin. may not regard it as highly as Foxx and Rosekind, either. The two men fought aggressively for the rollout of V2V and complementary autonomous-vehicle technology during tenures ending next month. V2V itself has been ruminating with regulators for more than a decade and in 2014 Foxx accelerated work on rulemaking.

Trump has not spoken kindly of previous Obama Admin. policies and when the U.S. EPA pushed forward finalizing 2025 fuel-economy and emissions regulations last week, the Alliance of Automobile Manufacturers appealed to congressional leaders and Trump to pause the rulemaking.

Foxx would not comment on Trump's priorities or possible future actions.