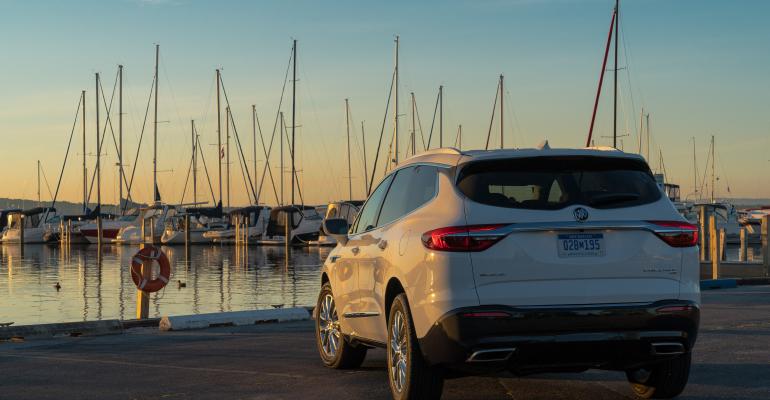 Turn Down for What? Buick Enclave Clamps Down Clamor

With competition now employing technologies such as active-noise cancellation, GM also saw as a priority raising Buick’s QuietTuning to another level.

SUTTONS BAY, MI – Reduce it. Block it. Absorb it.

Those are the three paths General Motors follows to make the Buick Enclave among the leaders in its class for cabin quietness whether knocking about town, chewing up highway miles or even towing up to 5,000 lbs. (2,268 kg).

But creating a quiet interior is not about wrapping passengers in a coffin. Quite the opposite, Buick executives say.

Muting unwanted sounds such as road noise, neighboring traffic or powertrain feedback creates a more enjoyable environment where passengers in each of the Enclave’s three rows can converse more easily, audio and infotainment systems are heard more clearly and everyone arrives at the destination less travel weary.

In short, Buick QuietTuning, a bumper-to-bumper strategy to quell unwanted noise, enhances the user experience, whatever form it may take, and gives the brand a more unique identity in the marketplace.

“When we look at the reasons for purchase, what comes through very clear is the seat comfort, the super-quiet cabin and the premium, smooth ride,” says Jace Stokes, product manager for the Buick Enclave. “Those are the three key attributes.”

Those attributes have the redesigned ’18 Enclave at No.4 in the large CUV segment in the U.S., according to Wards Intelligence data, with a 12.06% share through the year’s first six months behind the all-new Volkswagen Atlas, perennial No.2-selling Nissan Pathfinder and its dominating stablemate the Chevy Traverse.

Unit sales of the second-generation Enclave this year are up 15.3% to 22,420. The previous model, which included trim levels with the brand’s first execution of QuietTuning, delivered 556,017 units over its nearly 11 years on the market, which included a sales-spurring refresh for ’13. The latest iteration arrived at Buick dealers in the fourth quarter of last year.

“We learned a lot from the first-generation vehicle,” Stokes tells WardsAuto on the sidelines of a test drive here demonstrating the Enclave’s QuietTuning under various conditions, including towing and launching Regal-brand sport boats weighing between 3,000 and 4,600 lbs. (1,361-2,087 kg). “We saw we set the benchmark for quiet and a lot of competitors followed. Suddenly quiet became a priority.”

With competition such as the Acura MDX and Infiniti QX60 employing technologies such as active-noise cancellation, GM also saw as a priority raising Buick’s QuietTuning to another level. ANC from suppliers Bose and Panasonic was a key addition to the QuietTuning arsenal for the new model, Stokes says, along with new sound-dissipative and -deadening materials such as noise-absorbent interior carpet.

“The new materials are significantly better at preventing sound from entering the cabin, and they are much lighter than the materials we used before,” Stokes says. GM also developed a sound scope to identify unusual noises entering specific areas of the vehicle with a level of accuracy the automaker could not achieve previously.

“It allowed us to be very conservative on the type of materials we would use, rather than block out an entire section because we could not identify it,” Stokes adds. “We took 350 lbs. (159 kg) out of the vehicle, but it is quieter than the previous Enclave.”

John Martin, program engineering manager for the Enclave, says reducing, blocking and absorbing noise are the three pillars of QuietTuning, which Buick employs to varying degrees on other vehicles in its lineup, such as the Envision 5-passenger CUV and LaCrosse large sedan.

Chevrolet, Cadillac and GMC use noise-cancellation techniques to achieve certain interior-sound levels. The GMC Yukon launched the automaker’s use of ANC a decade ago.

To further reduce noise on the redesigned Enclave, the vehicle received 30% more welds to the body, and structural adhesive was applied wherever possible.

“That makes the body a lot stiffer, so you are not transmitting noise throughout the vehicle,” Martin says.

Powertrain mounts for the Enclave’s 3.6L V-6 and 9-speed automatic transmission were improved, as were mounts between the body and chassis. Engineers also optimized the operating range of the powertrain to reduce noise.

However, ANC leads the blocking effort. It is standard across Enclave trim levels, although only Premium and Avenir models receive the Bose 10-speaker audio system and subwoofer. The extra speakers and subwoofer dial up the effectiveness of ANC.

Four microphones inside the vehicle continuously observe low-frequency noises, such as powertrain buzz, eliminating them with a reverse image of the signal.

“I’ve had vehicles where we purposely calibrated ANC off to see the difference and it is unbelievable,” Martin says. “You hear a lot of rumbling, especially from the rear of the vehicle, where the muffler elements are.”

The rumble is an output of the Enclave’s optimized exhaust system, where the vehicle scavenges extra torque for heightened driving dynamics and towing capacity. The Enclave’s V-6 produces 266 lb.-ft. (353 Nm) of torque, which is a smidgeon less than the previous model but provides more twist where it counts.

“There’s a huge increase in the 2,000-3,000 rpm range compared to the old (Enclave), which is where you operate almost all of the time, so you get this really nice torque curve in the spot you really want it,” Martin says.

The muffler also is double-wrapped to block noise. Laminated windshield and side glass block things such as wind noise and neighboring traffic.

Buick previously employed carpet with a blocking element to reduce sounds such as road noise, but the new Enclave uses a far better absorbent material that also is 10% lighter. A thick dash panel is made of sound-absorbent material, and absorbent covers are placed over the front shock towers in the engine compartment.

“That’s one of my favorite parts. I spent a lot of time with Bose,” he says. “They’d send me a calibration and I’d say, ‘It’s a little muddy in the subwoofer. I want a little more punch and a little crisper bass.’ They tweaked all of that and I’m pretty happy how it all came out.”

A test drive to the picture-postcard Leelanau peninsula in northern Michigan puts QuietTuning on full display. Over the 500-mile (805-km) round trip, the Enclave delivers a quiet ride at highway speeds and blocks out the throng of local and tourist traffic jamming the streets of nearby Traverse City.

ANC knocks down engine noise under hard acceleration, which in the previous-generation model reached objectionable levels with a tall third gear in its 6-speed automatic. A Chevy Tahoe or GMC Yukon may come to buyers’ minds first when looking for a tow vehicle out of the GM stable, but Buick says the Enclave includes many items to make trailering easier. A trailering mode, for example, includes 1-tap blinkers that fire six times instead of three in standard driving mode, while available all-wheel drive with an active twin-clutch rear differential improves traction on boat ramps and other slippery surfaces.

Over the course of about 40 miles (64 km) trailering a 19-ft., 3,100-lb (1,406-kg). Regal bowrider, the Enclave pulls well enough, although the trailer tends to drive the car and the extra weight makes the variable-assist electric power steering feel noticeably heavier. Much longer behind the wheel with such a load could be fatiguing, given the constant steering inputs necessary to keep the train on the tracks.

But buyers likely will appreciate most the sound of silence, an attribute requiring a tricky balance between cost and pricing.

“There are some significant costs, but we were able to maintain our price points relatively the same,” Stokes says.

Base price of the Enclave increased $980 to $40,970 compared with the outgoing model. Avenir units tested here cost a smart $57,340 with options. Stokes says customers are willing to pay extra for the new Enclave’s higher degrees of comfort, quiet and spaciousness.

“Our customers consider it a sense of reward to themselves, that they can afford the vehicle and, whether they are traveling with family or friends, all of their passengers are treated equally well. That’s important to them.”