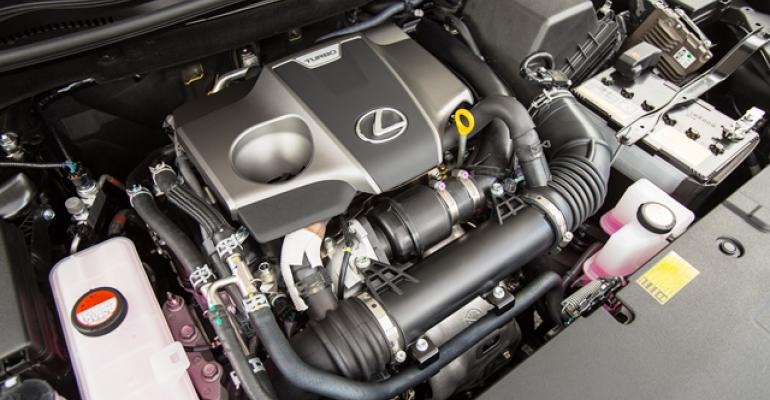 Toyota considers turbochargers similar to hybrid systems because they both amplify engine performance.

It's been 17 years since Toyota offered a U.S.-market turbocharged engine. The last one was a memorable 320-hp twin-turbo mill powering the high-performance version of its third-generation Toyota Supra sports/GT coupe. Introduced in 1993, it was withdrawn from North America in 1998. Toyota also sold turbocharged 4-cyl. pickups in 1985-86 and a turbocharged MR2 sports car from 1991-95.

"The market for vehicles that combine a turbocharger with a small-displacement engine is increasing," says Izumi Watanabe of Toyota's Engine Product Design Div. "So Lexus decided to adopt its first-ever turbocharged engine. This turbo mechanism helps efficiency by reducing engine displacement. It also increases acceleration and helps express the brand’s 'fun to drive' attribute."

Watanabe considers turbochargers similar to hybrid systems because they both amplify engine performance. Like a hybrid's electric motor, the turbocharger assists the torque and fuel economy of the base engine, he says. "Lexus has previously promoted electrical boost using motors, and we always have kept the concept of a turbo in mind as an option."

Unlike most automakers, Toyota designed and manufactures the NX 200t's turbocharger in-house to ensure a system "just right for the given application [and] not confined to the sizes and characteristics of turbochargers offered by existing manufacturers."

It is a compact, high-efficiency, twin-scroll design with blades optimized to enhance transient-response performance.

The impeller is "near-net-shape," forged from press-formed stock for added strength.

The turbine wheel is electron-beam-welded to minimize distortion, and it spins inside a heat-resistant cast-steel, reduced-nickel-content housing. Low-friction bearings enhance reliability while reducing noise.

The water-to-air intercooler is mounted directly to the engine for a short air path and to reduce intake air temperature, and its variable-control wastegate valve helps enhance fuel economy.

The new 2.0L I-4 is Lexus' first all-new engine since the ’11 LFA supercar's V-10. It features a deep-skirt design, an open deck and high-nickel-content iron cylinder liners. A unique combination of direct and multiport fuel injection, up to 17.1 psi (1.2 bar) of turbo boost at wide open throttle, and an advanced valve-control system that switches between Atkinson- and Otto-cycle operations optimizes performance and fuel efficiency.

Integrating the cylinder head, exhaust manifold and intercooler enhances both low-speed torque and fuel economy, along with a variable wastegate control system that reduces back pressure to minimize pumping losses under light engine loads.

To further reduce pumping losses, eliminate exhaust-gas interference and minimize turbo lag, the 4-into-2 integrated exhaust manifold pairs cylinders according to their expansion or compression strokes.

Dual variable-valve timing with intelligence (VVT-iW) enables the engine to start in the Otto cycle and then switch to the more fuel-efficient Atkinson cycle while optimizing torque throughout the engine's powerband. The Atkinson cycle's late intake-valve closing reduces pumping losses to boost efficiency.

Its major development challenges were heat-related. While engine cooling system testing normally is completed in about 10 sessions in a thermal chamber, this one was chamber-tested 40 times. In total, it was bench tested for more than 10,000 hours and on-road tested for more than 600,000 miles (965,580 km). The production version ended up with more than 200 thermal sensors instead of the usual 50 or so.

Toyota won't discuss potential future applications, but the engine is likely to see wider use in other Lexus models that have a sporty demeanor, such as the IS sedan. It could also power a variety of Toyota and Scion models, likely as both a more-fuel-efficient replacement for V-6s and as a performance upgrade over base I-4s.

Lexus: We Can Keep Loyalists Happy Despite Performance Push
Jul 18, 2014