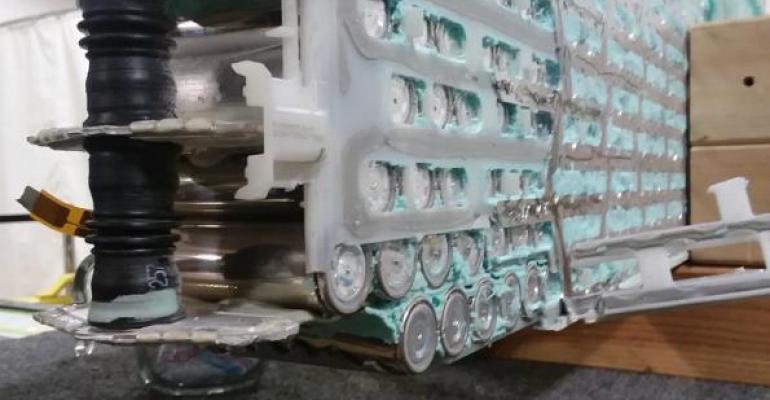 AUBURN HILLS, MI – Telling media “you can see the gaps from the moon,” vehicle teardown and benchmarking specialist Sandy Munro is not a fan of the fit-and-finish of the Tesla Model 3 electric vehicle.

Panel gaps are among many areas his firm, Munro & Associates, is poring over on the Model 3 they purchased in January for $72,000 (more than double the $35,000 advertised price) from a private owner.

Walking members of the Automotive Press Assn. over that Model 3’s body-in-white here at his firm's Detroit-area headquarters, Munro points out self-piercing rivets in the trunk area/rear of the car that are inexplicably raised and lowered, as well as an unusual mix of conventional and concentric-circle aluminum spot welds and riv-nut and clinch-nut fasteners. Of the latter, Munro says, “I don’t understand the rationale there.”

He also points out nine different parts make up the wheel wells, a contrast to what normally would be a single-piece structure in most vehicles, and notes laser-made wave welds are used in lieu of spot welds and self-piercing rivets on the upper door ring on the left passenger side of the car.

“This thing is like way over-designed by normal standards,” he says of the Model 3 body-in-white, which is the heaviest C-size body-in-white his firm has analyzed. The additional weight is detrimental to range, although he guesses it could be an effort to make the car more crashworthy.

On the left-side passenger door ring, Munro points out to media welding that is sloppily done, with welds made too close to the frame edge.

While today he refuses to speculate on reasons for poor craftsmanship, last week Munro told Internet show Autoline After Hours that many flaws found on the car indicate inadequate worker training. That would support many industry-watchers’ theories that the Model 3 production was ramped up too quickly under the orders of Tesla CEO Elon Musk.

Munro noted expensive sound-deadening material in his Model 3’s door was correctly applied on the right side and applied backwards on the left side.

“That’s not because of bad design, that’s because somebody wasn’t trained as to which side you’re supposed to put the shiny side up,” he said on the show. “At the end of the day we saw plenty of that. These are training issues.”

Munro has not been inside Tesla’s Fremont, CA, plant so he can’t say if assembly problems are caused by robots or humans, but Musk recently told CBS News the plant is over-reliant on automation.

In general, Munro’s firm has found that “everything below the floorpan is amazing, everything above it is (problematic),” he tells media here.

Falling into the amazing category is the Model 3’s battery pack with cells from Panasonic.

Mark Ellis, senior associate for Munro’s firm, marvels at the pack’s four individual circuit boards to control charging and discharging of modules and says all the batteries in the pack are the most accurate he has seen, within 2-3 millivolts of what their output should be.

Munro told Autoline After Hours 0.2 milliamps in difference between the modules were discovered in tests. “Nobody can balance batteries that close,” he said.

Ellis says another unique feature of the Panasonic/Tesla pack is the extensive use of glue. With each cell glued to each other, it means a failed cell can’t easily be replaced. However, little metal “whiskers” making nearly 9,000 connections mean a few cell failures won’t shut down the car, nor impact range greatly.

“This is probably the most advanced (automotive battery pack) we’ve seen,” says Ellis, noting it technologically exceeds the BMW i3, Munro & Associates highest-scoring vehicle overall in benchmarking, and using a Samsung pack with wound prismatic cells, as well as the Chevy Bolt’s LG-supplied pack with flat cells.

Some other commendable or unusual parts Munro says it found in the teardown of the Model 3 include floor mats that have a hard, Velcro-like backing instead of hooks or eyelets to stay firmly gripped to carpeting; a folding magnetic cover for the visor mirror; a 2-shot injection-molded hard and soft plastic piece on the lower side of the driver seat; a 2-sided circuit board with each side nearly identical for the car’s electric power steering system; a mass damper on the front, not rear, suspension; and a patented high-aspect ratio “wave” vent disguised within the top-front of the instrument panel, which eliminates the oftentimes unattractive square or round HVAC vents on an IP, as well as – with the help of air flowing out of a bleed vent – the ability to split intersecting airflow left or right.

Munro, who tells media here he pulled back on info he was planning to divulge on the advice of his lawyers, not under duress from Tesla, says he has since acquired another Model 3 and he finds it “better” in terms of fit-and-finish.

The Model 3 benchmarking study Munro & Associates is undertaking won’t be finished until July. Individual reports on specific areas also are available, as is a report comparing the Model 3 to the BMW i3 and Chevy Bolt.

Before the Munro Model 3 was pulled apart it was given to Siemens, which performed torque-and-twist tests, with and without the battery, and characterized the car’s noise, vibration and harshness levels. Those reports are available for purchase as well.