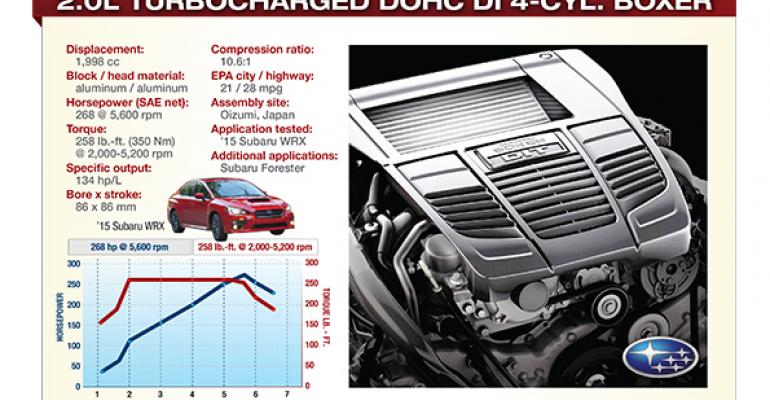 <p><strong>Subaru says this DI turbocharged H-4 is unique in the industry. </strong></p>
Technology

Ward’s 10 Best Engines competition has recognized outstanding powertrains for 21 years. This installment of the 2015 Behind the 10 Best Engines series looks at the development of Subaru’s 2.0L boxer engine.

Subaru created its original compact Impreza-based WRX to compete in the World Rally Championship, a title it earned three times. And today's ’15 WRX brings that competition pedigree to the road with the latest turbocharged “FA”-Series aluminum boxer engine.

Flat, H-shaped, opposed-piston “boxer” engines have been fairly rare in recent years. Among major automakers, only rear- and mid-engine German Porsches and front-engine, all-wheel-drive Japanese Subarus (built by Fuji Heavy Industries) still use them. Their primary advantages are good dynamic balance, a low center of gravity and low-hood packaging. Downsides compared with inline engines include higher costs and the need for unique transmissions.

Subaru’s hardy flat-fours once were criticized as buzzy, unrefined and not very fuel-efficient. But no more. This latest 268-hp 2.0L turbocharged, direct-injected iteration of Subaru's FA boxer 4-cyl. earns high praise for its eager response and strong performance appropriate to the rally-bred WRX, which is the vehicle WardsAuto editors tested. Yet it is EPA rated at a respectable 21/28 mpg (11.2-8.4 L/100 km) city/highway in the manual WRX.

“It provides seemingly instant neck-snapping gratification at step-off,” writes editor Tom Murphy. “Turbo lag? Not here.” Another comment from a 10-Best judge: “It sounds much more emotive (vs. the 250-hp version powering Subaru’s Forester XT) thanks to a new exhaust system that eliminates one chamber in the muffler and shortens the internal tubing.”

And another: “With a little work of the right foot and aggressive cycling through the 6-speed manual transmission, the FA turbo’s pleasure point is always close at hand. The turbocharger really gets working at 2,500 rpm and pulls even harder through 4,000 rpm. At this point, a Subaru engine of the past might sound raspy and taxed. Not the new FA turbo.”

Subaru’s WRX was redesigned and re-engineered for 2015, and among its many upgrades is this new, more-powerful version of the 2.0L FA turbocharged boxer. Driving all four wheels through either a 6-speed manual or Subaru’s new Sport Lineartronic CVT gearbox and the brand’s latest Symmetrical All-Wheel Drive, it generates more power and torque from less displacement than the ’14 WRX’s 2.5L turbo H-4, along with better fuel economy. But premium fuel is recommended.

It is a further development of the Forester 2.0 XT’s 250-hp turbocharged FA engine, which itself is based on the 2013 Ward’s 10 Best Engines-winning 200-hp naturally aspirated 2.0L FA boxer 4-cyl. that was new that year in the Subaru BRZ sports car. Compared with the Forester engine, it uses hotter camshafts, higher-rate valve springs and other enhancements to boost its output.

Unrelated to any previous Subaru H-4, these new FA-Series engines use a “square” architecture, meaning their bore and stroke dimensions are exactly the same at 86 mm, and all their reciprocating components were designed to be as light as possible.

To achieve that impressive balance of performance and efficiency, engineers teamed a suite of technologies that includes gasoline direct-injection, a high 10.6:1 compression ratio, dual overhead (actually outboard) camshafts, dual variable valve timing (VVT) that Subaru calls Dual Active Valve Control System (D-AVCS) and an intercooled twin-scroll turbocharger. It redlines at 6,700 rpm (6,500 rpm with the CVT) but hits its peak 268-hp output at just 5,600 rpm (using 15.9 psi [1.0 bar] of turbo boost) with a broad torque curve topping out at 258 lb.-ft. (350 Nm) from 2,000 to 5,200 rpm.

And, importantly for those who prefer not to manually shift gears, it works equally well with the other available transmission, Subaru’s new Sport Lineartronic CVT. We’re generally not CVT fans, but this one (like most conventional automatics today) offers a manual mode for occasional manual shifting. But its economy ratings are lower at 19/25 mpg (12.4-9.4 L/100 km) city/highway and 21 mpg (11.2 L/100 km) combined.

Like virtually every new engine these days, its top design priority was to achieve the optimum balance of performance and efficiency. Subaru engineers call those two opposite poles of an engine’s performance envelope “environmental performance” and “dynamic performance,” and they wanted both at the highest possible levels.

“It is a very low-friction engine,” writes WRX/WRX STI-Project General Manager Masuo Takatsu in an email exchange. He says Subaru engineers “aimed at a sporty power unit that could be paired with Sport Lineartronic CVT transmission and still deliver a WRX driving experience.” Subaru's marketing phrase for such performance: “Pure Power in Your Control.”

Asked about the engine team’s toughest challenge in meeting this objective, Takatsu says satisfying both power output and fuel economy objectives at the same time was most difficult.

“We downsized the displacement of the engine from the previous model and changed the fuel injection system to direct injection,” he says. “With these changes, we were able to realize more torque and better fuel economy at the same time. The project team also worked hard on improvements in other areas (of the car), including aerodynamics and tires, which contributed to this achievement as well.”

Subaru says this DI turbocharged H-4 is unique in the industry. “The symmetrical boxer engine layout has advantages for both dynamic and NVH performance,” Takatsu says. A combustion concept that combines air-guided and wall-guided DI combustion further improves the engine’s performance, he says.

One major challenge unique to boxer engines is maintaining sufficient lubrication to both cylinder banks during sustained high-lateral-load cornering encountered in racing and rallying, when g-forces tend to drive oil to the cylinders on the outside of the corner while potentially starving the ones on the inside. To keep the oil circulating properly under such conditions, the FA engine team designed special oil guides that help the cam chain carry it from the outside cylinders back to the sump.

Takatsu says there is ample room for improvement in this engine’s next generation. He specifically mentions working to improve the combustion process, fuel injection and “tumble-flow” air induction.

“This fleet-footed boxer steps into the ring with fire in its eyes,” editor Murphy concludes. And he adds that some WardsAuto testers saw 28 mpg (8.4 L/100 km) even while “exploring the power band,” which tops its 24-mpg (9.8 L/100 km) combined rating by an impressive margin.