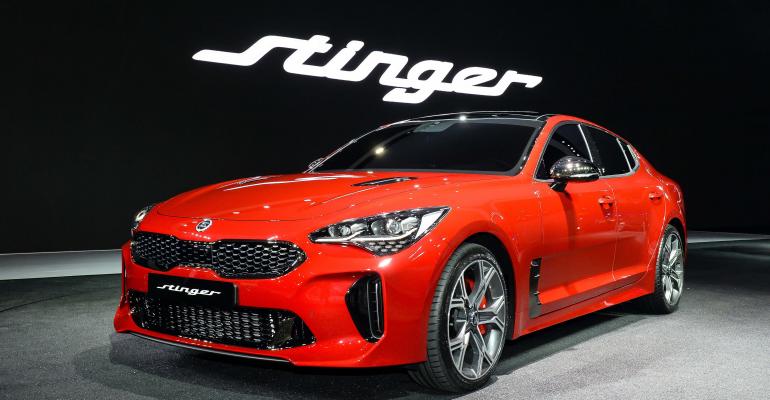 Kia&rsquo;s upper-brand strategy appears similar to the approach its Hyundai affiliate took in launching its separate Genesis line. But it&rsquo;s not clear whether Kia will go global with this plan or keep it within South Korea.&nbsp;

SEOUL – Kia’s rollout of its’18 Stinger at the Seoul auto show was both a preview of the fastback sports sedan for the domestic market and an historical moment in the evolution of the automaker’s marketing strategy, an executive says.

With the Stinger, Kia is launching the automaker’s new premium-line strategy for Korea, according to Chang Sik Kim, executive vice president-sales and marketing.

The Stinger is the first of several high-priced rear-wheel-drive models that will wear a new “E” class sub-brand badge, he says.

“We at Kia Motors have made strenuous efforts to increase our brand value,” Kim explains. “Our premium lineup of rear-wheel-drive cars starts with Stinger, which will be marketing leveraged to Kia’s strength in design competitiveness.

“Next year a large premium model will be added to the premium line when we introduce the successor to the current K9 (called the K900 in the U.S. and Canada and Quoris in other international markets).”

Kim explains the premium line will be marketed separately but will remain under the Kia brand umbrella. All vehicles in the premium lineup will wear a new “E” badge to differentiate them, he says.

The badge consists of the new premium-line logo, which is formed with a stylized capital letter “E” surrounded by a broad silver circle. As applied to the Stinger, the vehicle’s name appears understatedly embossed in the lower portion of the circle.

When other brands are added to the lineup, the logo will remain the same, with the name of the vehicle applied to the bottom half of the circle.

It’s not clear whether Kia will take this premium-line strategy global or keep it within South Korea. Korea may be a test bed for the new upscale marketing concept.

A spokesperson tells WardsAuto Kia’s new premium-line strategy applies only to South Korea for now. The new logo will be used only on vehicles sold in Korea, she says.

Gregory Guillaume, chief designer at the Kia European Design Center, spoke at the Stinger’s unveiling in Seoul about the coupe his Frankfurt-based team designed.

Guillaume says the Stinger is all about the joy of grand touring, of driving in open spaces and about passion, but “not with a burning desire to arrive at a destination first.”

Kia President Peter Schreyer, who is the chief design officer for both Kia and Hyundai, attended the auto-show presentation. He stayed very close to the team during development of the GT Concept on which the Stinger is based, and throughout every moment of the production car’s design evolution.

Schreyer is pleased with the outcome, and that Kia’s “latest baby,” as he calls it, has inspired the new premium-line strategy in South Korea.

One of the Stingers featured at the show was specially prepared to show off a new high-strength, lightweight carbon-fiber kit that includes the grille surround, air intakes and hood vents.

Also revealed at the show was a new speed spec for the Stinger equipped with a 365-hp twin-turbo V-6 and manual transmission. In that package the Stinger can hit 0-100 km/h (62 mph) in just 4.9 seconds, meaning it can do the traditional American 0-60 mph (161-km) sprint even faster.

The Stinger also is offered in Korea with a 251-hp 2.0L inline turbocharged 4-cyl. gasoline mill. Diesels are big sellers in Korea, so a 202-hp 2.2L turbodiesel is available in that market.

The Stinger will sell in Korea in both 2-wheel and all-wheel-drive versions.