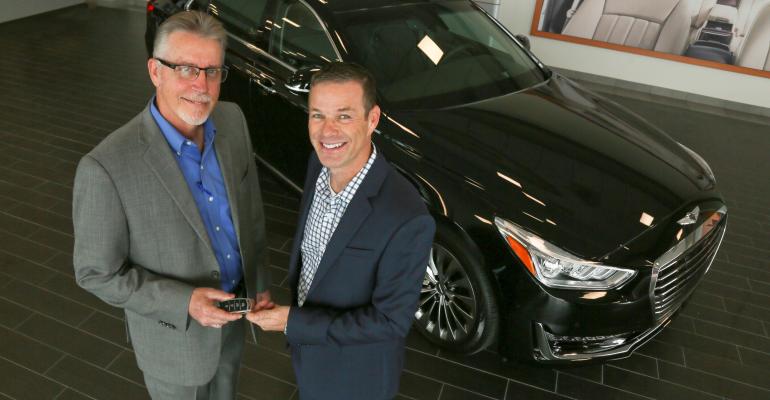 “This is rare,” he says of an automaker launching a dedicated luxury marque. He notes Toyota and Nissan did it with Lexus and Infiniti, respectively, 27 years ago. “It doesn’t happen every day.”

South Korean automaker Hyundai had sold the Genesis sedan as an upmarket member of its lineup. The model has been refreshed and renamed the Genesis G80 as part of the luxury-brand spin-off that took effect this year.

In 1986, Hyundai entered the U.S. market as a 1-pony player (Excel) in the entry-level econo-car segment.

Today, Hyundai’s top-of-the line Equus large car has been completely redone and redubbed the Genesis G90. With a base price of $68,100, it went on sale this fall.

To come from the new premium brand is the G70, a third sedan that would compete against the BMW 3-Series, the best-selling luxury car in the U.S. with 2015 deliveries of 94,527 units compared with 31,374 for the Hyundai Genesis model, according to WardsAuto. During its final year in the U.S., the Equus sold 2,332 units in 2015.

Also in the works for Hyundai’s spin-off premium brand are two CUVs and a coupe.

“We’ll have six models by model-year ’21, and who knows what comes after that,” Raphael says at the 2016 J.D. Power Automotive Marketing Roundtable. “We are committed to be in all segments of luxury.”

Yet as Genesis introduces more products, it wants fewer dealers to sell them. Of Hyundai’s 800 U.S. dealers, a subset of 350 sells the Genesis G80 and G90 in showrooms within showrooms.

“We may see that (350) figure go down,” Raphael says. “I think it is too high. We’ve talked to dealers about it. Throughput (average sales per-store and a key profit indicator) is important.”

Eventual plans also call for building separate stand-alone Genesis dealer facilities. Ideally, Genesis would have started a dealer network from scratch, Raphael says. “But time restraints didn’t allow us to do that.” Still, he adds, Hyundai dealers selling the two new Genesis models are excited about it, “and we’re proud to have them with us.”

He speaks of “a huge opportunity to reinvent the shopping experience.” The so-called Genesis Institute’s dealership training will, among other things, focus on ways to respect customers’ time.

Hyundai surveyed consumers as a prelude to launching the luxury division. Many of the market-research results centered on “respect,” Raphael says. “The ultimate respect is respecting someone’s time. We all have the same amount of time but once it is spent, it is gone.”

Time-saving efforts call for streamlining the Genesis buying process. That includes making it digitally possible for online shoppers “to do as much as state dealer franchise laws allow” towards the purchase of a vehicle.

The Genesis brand also offers a complimentary valet vehicle-pickup amenity for service customers. Owners get a dropped-off replacement loaner while their vehicles are in the shop. “They don’t have to go to the dealership if they don’t want to,” Raphael says.

He cites that as another example of “reaching out to customers and showing them we respect them and their time.”