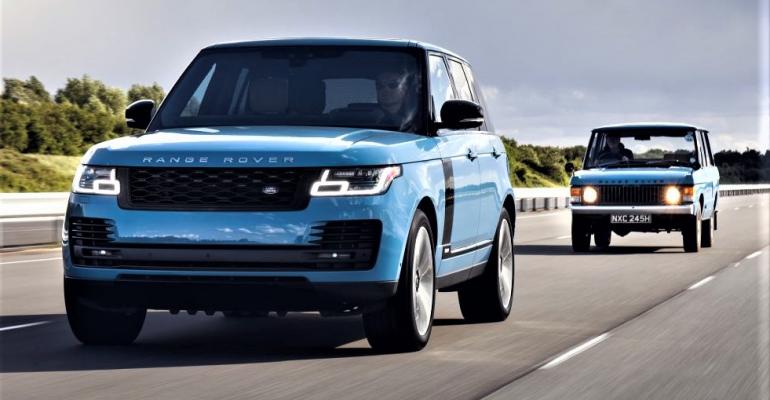 Now, to celebrate the luxury SUV’s five decades, Land Rover introduces the Range Rover Fifty. A limited-production model, just 1,970 examples will be built for sale around the world.

Land Rover introduced the Range Rover on June 17, 1970. Designed and engineered to provide both the ride comfort and amenities of a Rover sedan and the off-roading capability of a Land Rover, the original Range Rover remained in production for 26 years, retiring in 1996.

The SUV was put on display in 1971 in the Louvre Museum in Paris, called at the time an “exemplary work of industrial design,” according to Land Rover.

Today, the Range Rover name is applied to four different SUVs: Evoque, Velar, Sport and the original, which Land Rover says remains the benchmark in the segment. They complement the new Defender and ongoing Discovery families of SUVs, each group of models appealing to different kinds of buyers, but all blending the luxury and off-roading capability for which the original Range Rover was known.

Over the years, the Range Rover chalked up numerous firsts, including wins in the grueling Paris-Dakar rally. It was the first SUV to offer permanent 4-wheel drive and the first employing all-aluminum construction. Among 4WD vehicles, the Range Rover was first to offer 4-wheel antilock brakes, electronic traction control and automatic electronic air suspension.

The current Range Rover is the fourth-generation example of the SUV, last redesigned in 2012. It offers various drivetrains and technologies, from mild-hybrid and plug-in hybrid propulsion systems to off-road traction and advanced driving assistance systems. But even though it is a modern luxury SUV, the design draws clear inspiration from the original, such as its clamshell hood, split tailgate and floating roof designs.

Based on the Autobiography trim level, the new Range Rover Fifty comes with a choice between standard and long wheelbases, and all North American specification models include a supercharged 5.0L V-8 making 516 hp.

Each Range Rover Fifty has a "1 of 1970" center console plaque indicating the serial number and commemorating the year of the brand's debut.

The U.K. automaker says it will announce the Range Rover Fifty’s price closer to the vehicle’s availability later this year. For reference, the Range Rover Autobiography starts at $145,095 including a $1,295 destination charge.