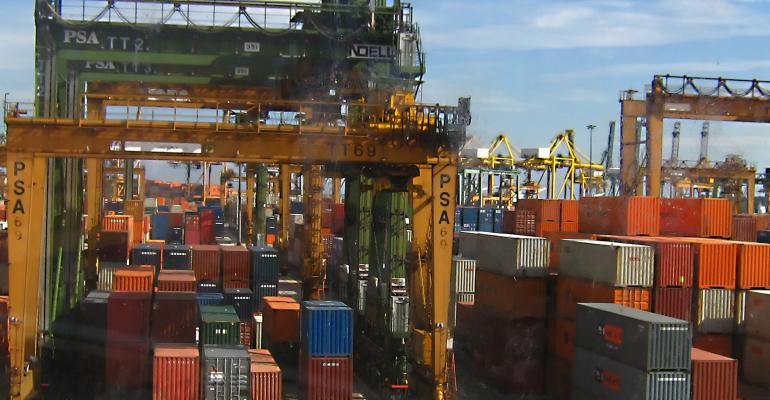 The Ministry of Transport will test &ldquo;truck platooning&rdquo; technology for moving containers between port terminals. A truck with a driver will be followed by a convoy of three or four driverless vehicles.

Singapore will test the use of driverless trucks in its ports, with the government saying autonomous-vehicle technology holds transformative potential for the city-state’s transport system.

Permanent Secretary for Transport Pang Kin Keong says the Ministry of Transport will test “truck platooning” technology for moving containers between port terminals. A truck with a driver will be followed by a convoy of three or four driverless vehicles.

He is quoted in a Singapore Economic Development Board report as saying this reduces manpower reliance and increases productivity while benefiting Singapore’s logistics sector, which has been facing a shortage of drivers.

Pang says the government doesn’t intend to replace a driven car with a driverless one, but to explore autonomous-vehicle technology in shared or public transport to bring new forms of mobility for the masses with the convenience of private transport.

The government also is interested in testing driverless vehicles on selected routes in some Singapore neighborhoods where users can summon an autonomous vehicle through mobile applications and travel short distances in them.

Paul Tan, director of the ST Engineering at Nanyang Technological University’s Corporate Laboratory, says the growing use of autonomous vehicles will bring with it a demand for new skills and technologies in areas such as car construction, software systems and maintenance.

Ho Kei-Long, a senior scientist at the university’s Energy Research Institute, sees the rise of driverless vehicles as inspiring a shift in the automobile industry from individual ownership to one where consumers pay to share cars, and pay for mobility as a service.

Self-driving cars would be suitable especially where public transport or taxis were not viable options. Tan says such vehicles could be summoned on demand to get people from their homes to the nearest major transport nodes, or even send them to a nearby destination.

“It is important to examine if a car-sharing model of AVs can address some of those needs, and transform people who are on the borderline of wanting to own a car to switch to public transport,” Tan says. “We may not convince everyone, but if some make the switch, we have made good headway.”

Tan says driverless vehicles would pose a challenge for the insurance industry, which would have to reconsider how it insures these vehicles in light of uncertainties about who is liable if an autonomous vehicle with a human occupant gets into an accident.

This is one of many issues related to the safety, reliability and appropriate use of AVs that need to be ironed out before they can be rolled out on a citywide scale.

Tan says it is important to differentiate between readiness of AV technology and the broader system needed to support it. “A lot of companies say that we will see 100% AV penetration in society by 2026, but many questions about safety and liability have yet to be answered,” he says.

To work in the Singapore context, AVs would need to function safely even in heavy downpours, which can compromise the radar or camera technology that AVs rely on to move safely through a city. Tan says this is a key research area for his laboratory.

Meanwhile, ERIAN is working on ways to make AVs even more efficient by exploring a feature where electric driverless vehicles automatically can drive to a charging station when running low on power.

Emilio Frazzoli, lead investigator at the Singapore-MIT Alliance for Research and Technology (SMART) future urban mobility program, says everyone should keep in mind that fully substituting human drivers with AVs need not necessarily be the end goal.

“It will take a long time before cars can do everything that human drivers can do,” he says.