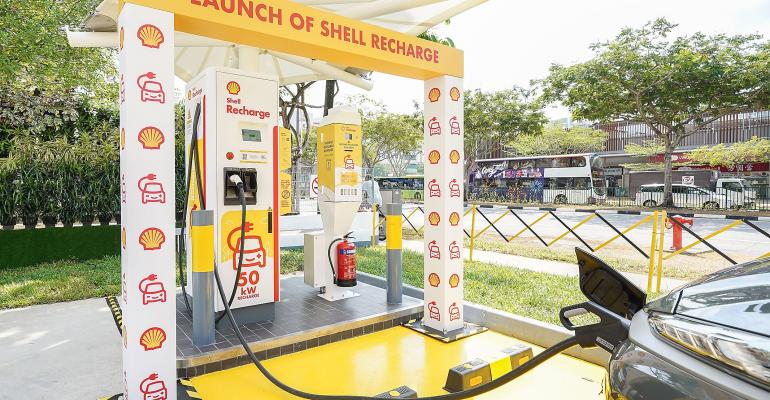 Shell Singapore is getting into electric-vehicle charging in Southeast Asia.

Shell Recharge is the company’s EV-charging operation at its service stations, and by October it will be available at 10 Shell stations – close to 20% of its retail network in Singapore.

The Shell Recharge 50-kW rapid direct-current chargers typically provide 80% charge in about 30 minutes and are priced at 55 Singapore cents ($0.40) per kWh.

Shell Retail Singapore General Manager Aarti Nagarajan says the chargers are compatible with most EVs in the Pacific Ocean city-state.

“Our insights show that Singaporeans worry about lack of sufficient and fast-charging options for EVs,” Nagarajan says in a statement.

“With Shell Recharge, customers can easily charge their EVs while they enjoy our air-conditioned shops and pick up a coffee, a fresh pastry, a ready-to-go meal or a quick snack.”

A Shell-commissioned study found 52% of Singaporeans are deterred from buying an EV because they think there are not enough charging stations in Singapore.

“Shell aims to make more of such low-carbon energy solutions available in Singapore in the months and years to come.”

Meantime, the Singapore government has rebuffed a complaint from Tesla co-founder and CEO Elon Musk, who said in a January tweet the island state is being too slow to adopt EVs and the government has been unwelcoming.

Environment and Water Resources Minister Masagos Zulkifli tells The Edge newspaper taking mass transit is a better climate-change solution than tooling around in a Tesla EV.

Zulkifli says Singapore has prioritized greater use of its trains and buses.

Singapore’s trains and buses cover much of the island’s 278 sq. mi. (720 sq. km) with the newest subway routes featuring driverless carriages and several of the most popular bus routes traversed by double-decker carriers.

“What Elon Musk wants to produce is a lifestyle,” Masagos is quoted as saying. “We are not interested in a lifestyle. We are interested in proper solutions that will address climate problems.”

Users will hail an autonomous shuttle via a mobile app or at kiosks along a 3.6-mile (5.7-km) route to take them to selected destinations around the island.

A safety driver trained to take control of the vehicle, if necessary, will be on board.

The free service will operate for four hours on weekdays.