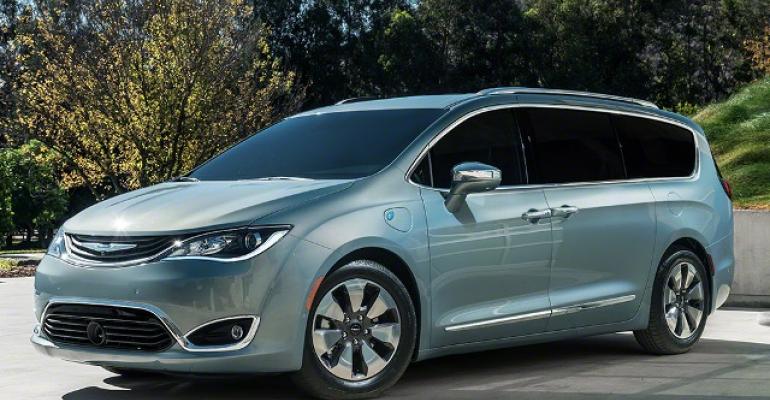 Chrysler unveils its all-new entrant in the segment it created some 30 years ago &ndash; the minivan &ndash; and draws on a name from a segment-buster past &ndash;&nbsp;Pacifica &ndash; to create a new persona for its totally redesigned people mover.

DETROIT – Welcome back, Pacifica – this time as a minivan instead of its original “segment buster” station-wagon form – replacing the Town & Country nameplate on Chrysler’s popular people mover.

“It’s so new and different it deserves a new name,” says Tim Kuniskis, FCA North America-head of passenger cars. “We don’t want people to think of it as the Town & Country of old.”

Naming conventions aside, the ’17 Pacifica due in dealerships this spring represents the company’s all-new entry into a segment it invented three decades, five minivan generations and a few ownership changes ago. Since introducing the original front-drive minivan in 1983, the company has sold 14.3 million Chrysler Town & Countrys and Dodge Caravans.

Now comes Pacifica, a name formerly hitched to Chrysler’s early stab at a CUV from 2004-2008, now representing the minivan family. The all-new Pacifica boasts 37 “minivan firsts” and 115 innovations, the biggest of which is the “world’s first 80-mpg hybrid minivan,” Chrysler says.

The plug-in hybrid teams two electric motors with a 3.6L Pentastar V-6 and utilizes the storage space under the second-row floor for its 16-kWh lithium-ion battery pack. Chrysler says recharge time on a Level 2 (240-volt) charger is 2 hours and that electric-only range is 30 miles (48 km). The hybrid goes on sale in second-half 2016.

The standard Pacifica packs a 3.6L V-6 producing 287 hp and 262 lb.-ft. (355 Nm) of torque, hooked to a 9-speed automatic transmission driving the front wheels, although this time around the minivan will be all-wheel drive “capable,” says Jessica LaFond, chief engineer. Stop-start technology also will be available, but not at launch.

“We want to give every bit of space to the customer – every millimeter,” says LaFond.

Upping the bar for easy accessibility, the Pacifica offers hands-free power liftgate and sliding doors, actuated by making a kicking motion under the door or bumper to open or close the door.

Exterior styling is dramatic for a minivan, with a lower roofline and hip point, a sharply sloped windshield and noticeable side-glass tip-in, all riding on a longer wheelbase with a wider track to give the Pacifica a planted and dynamic stance, says Brandon Faurote, head of exterior design. Large 20-in. wheels – up 3 ins. compared with the current Town & Country – are available.

Front-end styling is highlighted by a floating Chrysler wing in a mesh grille surrounded by a Mobius strip of never-ending chrome, while the side view picks up that theme in chrome elements intended to give the vehicle a more SUV/CUV appearance. The hybrid model comes exclusively in silver teal at launch.

Interior styling is refined, accentuating interior spaciousness and width, says Winnie Cheung, head of interior design. “Typically, people buy in this segment out of necessity. We want to provide an emotional appeal.”

A Chrysler-first flush-mounted 8.4-in. (21-cm) flat screen highlights the center stack while available seatback-mounted 10-in. (25-cm) touchscreens provide rear-seat entertainment. “Every row offers something special, not a compromise,” Cheung says.

Minivans have slipped from a high of more than 1 million sales annually to about half that now, but the segment remains important to Chrysler. With 6 million Chrysler minivans still in service, the company hopes this latest generation can reclaim the sales lead in the segment it created – and owned, until Honda and Toyota jumped in.

The Pacifica is built at Chrysler’s Windsor, ON, Canada, plant, alongside the carryover ’17 Dodge Grand Caravan that Chrysler has said will be dropped from the lineup at some unspecified date. Earlier Chrysler product plans indicated production of the Dodge minivan would cease in 2016.