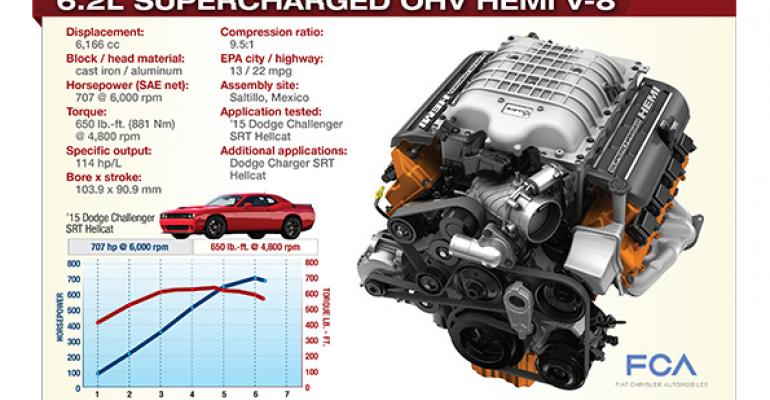 &ldquo;If one were sentenced to eternal damnation,&rdquo; one WardsAuto editor concluded, &ldquo;there&rsquo;s no finer way to get there than in the Hellcat, running into the abyss at wide-open throttle while the helpless soul hangs on for dear life.&rdquo;

Ward’s 10 Best Engines competition has recognized outstanding powertrains for 21 years. This installment of the 2015 Behind the 10 Best Engines series looks at the development of FCA’s 6.2L Hellcat V-8.

It may be an understatement to say WardsAuto editors are impressed by FCA SRT’s awesome 707-hp Hellcat V-8. “This magnificently decadent 6.2L supercharged Hemi V-8 earns a spot on the 2015 Ward’s 10 Best Engines list for reigniting muscle-car passion,” one wrote, “while, at the same time, pulling double duty as a perfectly sedate daily driver that saw 16 mpg (14.7L/100 km) in our testing... It’s the best performance-car engine we’ve seen in years.”

Chris Cowland, FCA’s director of Advanced and SRT Powertrains, led this program and took it to CEO Sergio Marchionne for approval.

“Looking to extend the performance of the Hemi engine,” he says, “we came up with this idea and took it to the product committee. They gave us the go-ahead. Based on the existing 6.4L Apache SRT Hemi V-8, it was done internally by a small team, and 91% of its parts are different.”

Some say the simpler, cheaper, easier-to-build, package and service attributes of cam-in-block engines are “old tech,” but GM and FCA have done wonderful things with them in recent years. This one has a forged-steel crankshaft with induction-hardened bearing surfaces, forged-alloy pistons with carbon-coated rings, powder-forged connecting rods and hollow-stem, sodium-cooled exhaust valves, among other heavy-duty features.

It also boasts dual variable-valve timing with a hydraulic actuator moving the camshaft (both intake and exhaust lobes together) within a 37-degree window. “This is different from the Viper engine which moves both independently,” Cowland says.

“We benchmarked a couple of competitive products (the Ford Shelby GT500 and Chevrolet Camaro ZL1),” he says. “We wanted to put our Challenger and Charger on top, so Hellcat was about setting new benchmarks above its two primary competitors. The raw numbers were very important, but we were trying to create a driving experience.”

They chose supercharging over turbocharging because they wanted an authentic American muscle car with instant throttle response. They also wanted distinctive sound character, so they engineered some trick exhaust systems with actuated valves and ensured that some supercharger sound came through.

“When you drive a car with this engine that character is there. It sounds like nothing else,” Cowland says.

“We didn’t think we were pushing the envelope far enough, so we revised those targets. We wanted a seven in front of the power number and a torque number above 625 lb.-ft. (847 Nm), close to the transmission’s capability.”

On the efficiency front, “A car like this is on the negative side of CAFE, so we tried to minimize that,” Cowland says.

But the toughest challenge was providing sufficient cooling for sustained high-output operation.

“Competitive vehicles suffered some heavy de-rates (power reductions due to heat buildup) in hot on-track conditions,” Cowland says. “So we set a requirement that the Hellcat had to run 20 laps of a race circuit flat-out without a thermal de-rate.”

That led to a new way to cool the intake air. “Instead of using the engine coolant, which is running at 90°C (194° F), we have a separate low-temperature loop that runs at 40°C (104° F) with two charge-air coolers in the supercharger and an electric pump. They cool it to below 60°C (140° F) and can maintain that over 20 laps at full-race pace.

“When customers take a Hellcat-powered car to a track or drag strip, they get exactly the same performance lap after lap, run after run.”

Amazingly, just running the Hellcat’s supercharger at full power at 6,000 engine rpm requires 90 hp. Cowland speculates the gross power the engine generates to make 707 ponies after parasitic losses may be close to 1,000 hp.

“We have a very, very high flow requirement for the (Continental) injectors,” Cowland says, “and a very unusual spray angle. We have to bend the spray within the intake port.” And it is port fuel injection, not direct injection, because the engine’s two-valve Hemi arrangement, which provides excellent airflow into the cylinders, also makes placement of the injectors a challenge.

“We use two spark plugs to get efficient combustion in such a relatively large bore, and putting a DI injector in that type of combustion chamber is very difficult,” he says. The fuel pump is a dual-pressure unit that runs at either 2.0 or 5.5 bar.

“It has to idle well for part-load emissions,” he says, “then we have to put a lot of fuel into it to generate 707 hp. For the injectors to run efficiently at both part load and high power, we run feed pressure to them at first low, then higher pressure... the first time we’ve ever done that.”

“There is never an end to the road,” Cowland says. “There is always something we can do to improve efficiency or output. We are considering what will be our next iteration from an SRT vehicle perspective, and what the right powertrain is for the future. It may be based on the Hellcat architecture, or it may be something else more fitting with the DNA of that vehicle.”

And no, the engine won’t fit in the Viper.

“The Hellcat might look on paper like it would make a better Viper,” Cowland says, “but we believe the right DNA for the Viper is the engine it has today. That is an out-and-out track car. While the naturally aspirated V-10 generates less power, it helps us get very good weight distribution. And those two engines are very different in character.”

Why call it Hellcat?

“Bob Lee, our powertrain vice president, is an aircraft aficionado, so all our engine project internal names have been airplanes or helicopters. We pulled together a list of potential names and polled our group. The Hellcat came out on top, maybe because the World War II Hellcat’s engine was turbocharged and supercharged.”

“If one were sentenced to eternal damnation,” one WardsAuto editor concluded, “there’s no finer way to get there than in the Hellcat, running into the abyss at wide-open throttle while the helpless soul hangs on for dear life.”