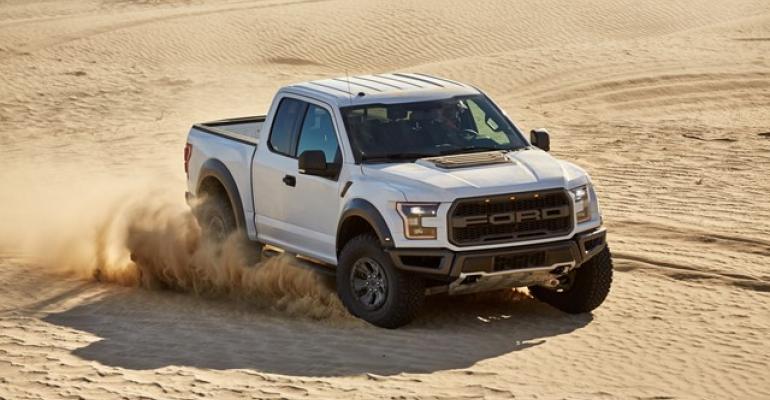 The high-performance Ford F-150 Raptor off-road pickup stands out as our most unorthodox choice for Wards 10 Best User Experience honors, but there is method to what at first glance might appear to be group madness among our judges.

Let’s start with the obvious. Everything about the Raptor is beefy and bold, from its hefty leather-wrapped steering wheel to its oversized knobs and switches, all in keeping with this beast’s take-no-prisoners persona.

But behind the brawn is a brain in the form of Ford’s Sync 3 interface, now in its third generation and outstanding for its easy, intuitive operation, spot-on voice control and fast reaction time. Bluetooth hookups to our myriad mobile phones are simple and lightning quick.

While our off-road opportunities are limited, we do come to appreciate the fine work performed by Ford engineers in creating such an outrageous machine – and providing the tools to tame it at the driver’s fingertips.

We didn’t fully appreciate the Raptor’s capabilities until we were cruising down a gravel back road at what we thought was 40 mph (65 km/h). Casting a glance at the speedometer, imagine our surprise to learn we were traveling at expressway velocity, the Raptor’s off-road suspension, wide track and meaty 17-in. BF Goodrich monster-truck tires smoothing the potholes and corduroy chatter bumps to satin as the stability system kept us on the straight, and in this case, definitely narrow path.

On more civilized terrain, the Raptor shows its strength in the form of highly capable driver-assistance systems that reinforce the truck’s rough-and-ready branding. In particular, our judges note the muscular lane-keeping response, designed to yank the big rig back into its proper lane should a driver’s attention wander.

Helpful whether on- or off-road, the 360-degree camera provides a clear view for parking, backing up or working through tight trails, supported by a front lens-washer system activated with the windshield wipers. Toss in Pro Trailer Back Up Assist and it’s hard to find fault with visibility and functionality despite the Raptor’s tall ride height and wide stance that cut into street-level sightlines.

Although the Raptor’s adaptive cruise control shuts down at lower speeds, a more-advanced version is on the way in the ’18 F-150. That system not only is capable of bringing the truck to a stop, but also adapts its braking and throttle response when pulling a trailer or carrying a heavy load. Smart.

We find it very significant that a truck primarily aimed at serious off-roading offers such a wide array of technological advances designed to make on-road driving easier and safer. Considering trucks (and their SUV/CUV counterparts) make up an ever-increasing share of the market, it’s good to see elements like this aren’t being overlooked in the performance vehicles, including off-road trucks.

“The building blocks for an autonomous or semi-autonomous pickup truck and off-road vehicle are here,” says Winter.