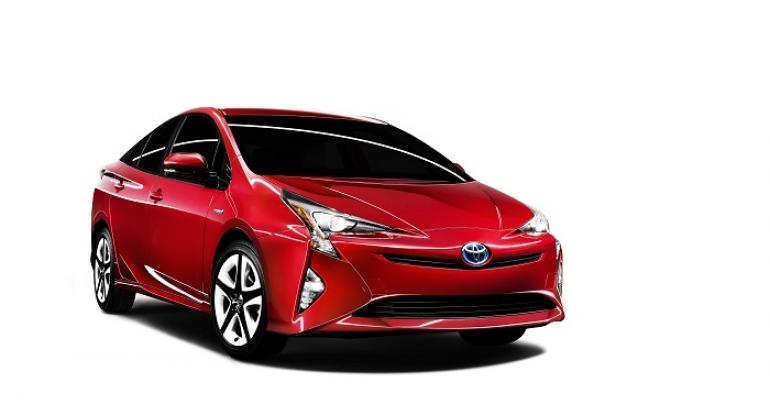 A rating of 55 mpg gives the Prius best-in-class fuel economy among vehicles without a plug, Toyota says.

LAS VEGAS – The sixth-generation Prius will get 10% better fuel economy than the model it replaces, Toyota reveals here tonight at a glitzy global unveiling for the latest iteration of the industry’s best-selling hybrid.

“With an expected 10% improvement in EPA-estimated mpg on core models, (the) Prius will offer best-in-class fuel economy among vehicles without a plug,” Toyota says in a statement released to media ahead of tonight’s event. “A soon-to-be unveiled Eco model will achieve an even greater improvement, strengthening Toyota’s leadership in hybrid fuel efficiency.”

The Eco model has been rumored to have a lithium-ion battery pack to achieve higher levels of fuel efficiency, but Toyota offers no specifics about its propulsion system in a pre-debut press release.

The core Prius models are expected to continue using a nickel-metal-hydride pack. Toyota says there is “higher energy density” in the car’s batteries but doesn’t divulge kilowatt hours or voltage.

The Japanese automaker says a more-than-40% improvement has been made in the thermal efficiency of the car’s internal combustion engine, while hybrid components are expected to be smaller and lighter.

The fourth-gen Prius, the first Toyota to ride on the automaker’s New Global Architecture platform, is longer, lower and wider than the third-gen model. Length is the dimension increasing the most, up 2.4 ins. (61 mm), bringing the Prius just a few inches shy of the Corolla.

Thanks to images of the car leaking ahead of tonight’s event, more than a few industry insiders have had time to note the new Prius’ similarity to the Chevy Volt.

The new architecture not only will have higher levels of component sharing across vehicles riding on the platform, but also should result in more engaging ride and handling characteristics.

Thanks to its lower center of gravity, the Prius’s front-badge height is equivalent to that of the sporty Scion FR-S, Toyota says.

The 5-door hybrid has what’s billed as an all-new double-wishbone rear suspension for “a better connection to the road.” The body also is more rigid to improve responsiveness during cornering.

With most technical details still under wraps, Toyota is more forthcoming on the car’s appearance.

Its profile was inspired by the idea of forward motion, typified by a runner in the starting blocks, the automaker says.

With a more-forward roof peak and lower hood, plus added width and lowered height, Toyota has lessened the tall and narrow appearance of earlier generations.

The car’s side is awash in character lines, with an upper crease terminating at the lowered rear spoiler, while another line starts above the sill and runs into the rear fender.

The ’16 Prius is available in seven colors, including a new Hypersonic Red, achieved with a new treatment process that creates a deep luster.

Having been criticized in the past for being boring and budget-minded, Toyota says the new Prius’s interior is fun and functional, with elements of high-visual impact.

Other interior features include a wide instrument panel, form-hugging seats, improved visibility and controls that are easier to use.

The Prius is one of the first Toyotas in the U.S. to offer the automaker’s Safety Sense system, which bundles advanced technologies including automated pre-collision braking, pre-collision with pedestrian avoidance, lane-departure alert with steering assist, full-speed dynamic radar cruise control and automatic high beams.

Toyota says the new Prius goes on sale early next year, just shy of its expected launch date of late 2015.

The automaker has sold more than 3.5 million Priuses globally since the first generation debuted in Japan in 1997 and the U.S. in 2000.

Due to its advanced age and low gasoline prices, U.S. sales of the third-generation Prius have been trending down in recent years.

WardsAuto forecasts redesigns of the Prius V and the other Prius, the subcompact C, to arrive next year. The V and C debuted as all-new models in the U.S. in 2011 and 2012, respectively.